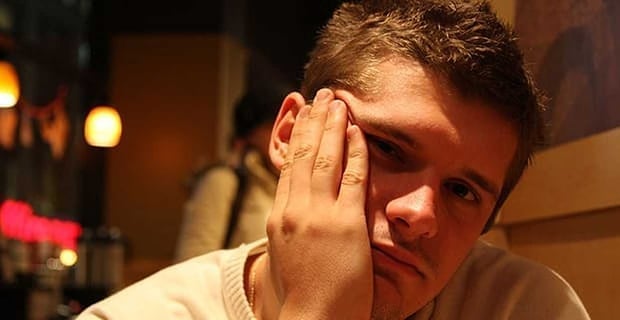 8 Signs He’s Not Into You

Although I often talk about how to tell if a guy is into you, today’s article is going to focus on the opposite: how to tell if he’s not actually into you.

Let’s get straight to it:


This is probably the number one tell-tale sign that lets you know if a guy is into you. If he’s not into you, then he won’t want to be around you.

When a guy is attracted to a woman, he will act in many different ways. He might tease her. He might ignore her. He might be annoying, but at the end of the day, he’s always around her when he’s doing this.

If a guy is into you, he’ll always find reasons to be close to you. You’ll always see him popping up in your vicinity.

This is something you probably didn’t initially notice, but once you realize it, you’ll start to see it all the time.

The key here is to not automatically assume he’s not interested in talking to you because he’s afraid of making the first move or because he takes a very long time to reply to your texts.

A lot of guys have all sorts of weird texting habits. In general, you should pay attention to the issue of him not being interested in talking to you. You should see this over the long run.

You need to see if he actually has ample opportunities to text you or talk to you, and then based on those, decide whether or not he chooses to take those opportunities or ignore them.

Finally, if you are talking but he always seems to be the one that’s trying to end the conversation, that is another clear sign he’s not actually interested in talking to you.

3. He talks to you like he does his friends.


This is actually quite easy to spot. If he always talks to you in a casual tone of voice, similar to how he does with his friends, then he’s probably not into you.

When a guy is interested, there’s always at least a slight variation in how he goes about talking to you, a variation that proves he’s interested. He has a special way of talking to you or extends some special kind of attention, something he doesn’t do with anyone else.

One of the best things you can do is to observe his behavior with other people. This will allow you to judge if how he is acting any different with you.

4. He has no problem telling you about girls he likes.

Make sure you do not confuse this with the occasional story about some girl. All guys do that and it really isn’t a big deal.

However, if he’s having no trouble telling you about all the girls he likes, the girls he’ll sleep with and any other fantasies of this nature all on a somewhat regular basis, then you can take that as a clear sign he is not that into you.

If he was, he wouldn’t be telling you about all of these other girls.

5. He doesn’t seem to have time for you.

I hate when people flake out, although it rarely happens to me. When a girl flakes, I learn two very important things.

If a guy is flaky or cancels plans and does not reschedule, that guy is not interested in you. Quite frankly, if he misses two consecutive dates, you can be absolutely sure of this.

Missing one date is one thing, but if he really wants to see you, he will make the time and put in the effort.

6. He flirts with you and everyone else.


As mentioned on point three, noticing a guy’s behavior with other people is critical in determining whether or not he is into you.

If you think he’s flirting with you, look closely at how he acts around other women. Does he seem to flirt with them, too?

He might just be a flirty guy and the fact he acts that way around you means nothing.

7. He is friendly with you and everyone else.


Again, this is another reason why you need to pay attention to his behavior.

You might think he is overly friendly with you, but in fact, he is just a friendly, social and outgoing guy.

If you see his behavior is no different with you than with any other person, that is a clear sign he doesn’t have any particular or special interest in you.

8. He keeps his feelings hidden.

Although this issue is probably more prevalent in relationships, if you are seeing a guy for quite some time and he has a very hard time of talking about his feelings, or if he seems to keep them all hidden, that’s a very common sign he’s not interested.

If a guy is into you, he will generally let you know about those feelings sooner or later. If you’re unsure about this issue, the best thing you can do is to give him some more space.

Just make sure you do not waste a lot of time on him.

This is the sort of thing I discuss on my blog and in the free ebook I give out. If you want to increase your love life’s success, visit http://TheSingleWomanGuide.com – a place where the “conventional dating” mindset is thrown out the window in favor of more direct and fruitful methods of meeting, attracting and keeping a quality guy in your life.

What He Says vs. What He Does

16 Reasons Why a Guy Might Not Be Into You

What You Did That Made Him Pull Away

How Do I Know He’s the One for Me?