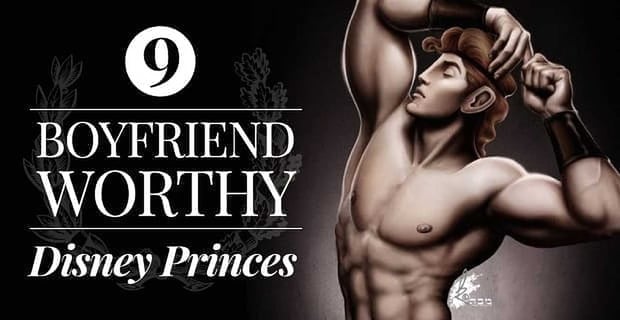 So what would it be like to date or even marry a Disney prince in modern day? Let’s find out!

Before we get to the list, we want to give a shout-out to David Kawena, who created all of these wonderful designs. Don’t forget to also check him out on Facebook, Pinterest, Twitter and Tumblr!

He plays the flute, so just imagine what else he could do with those lips. Nuff said.

“When talking to a stranger is actually encouraged.”

He’s not shallow – he’ll fall in love with you by just the sound of your voice. Plus he can pull off tights and a fedora like no one’s business.

He goes from stealing bread to stealing hearts. He’s an ambitious one, but hey a man’s gotta eat. Let’s hope for Princess Jasmine’s pleasure he stays hungry.

“You had me at smolder.”

Witty sense of humor and plays the Don in Distress role more than once for his princess to rescue him. Hmmm…I like tie up games, too!

“For all those cold winter nights.”

Picks his nose, lives in a bachelor pad with an overgrown pet and works as a salesman. Hey, he is who he is. I could look past an overbearing troll mother-in-law for him.

Who wouldn’t want to date a god? And a ginger god at that! Oh, he’ll go the distance alright.

He’s big, strong and did I stay big, uh…muscles. Sure he’s a little bossy, but he’ll bring that skill to the bedroom, too. This warrior has got it going on in all sorts of ways.

2. Prince Naveen (The Princess and the Frog)

“The king of French kissing.”

Those curls. That smile. And not to mention the accent. I’d kiss a frog any day if it brought me him.

1. Beast (Beauty and the Beast)

If I could date or marry a Disney prince, I’d go for Beast. “Beauty and the Beast” proves humanity, compassion and love can bring us all to happily ever after.

No guy is perfect, charming and suave, and no guy will give you everything from the moment he lays eyes on you. The best relationships always come from finding that imperfect and crazy person who perfectly balances you. This is someone who can warm a cold heart and cool a hot temper. This is a person who loves and accepts all your visible and hidden scars.