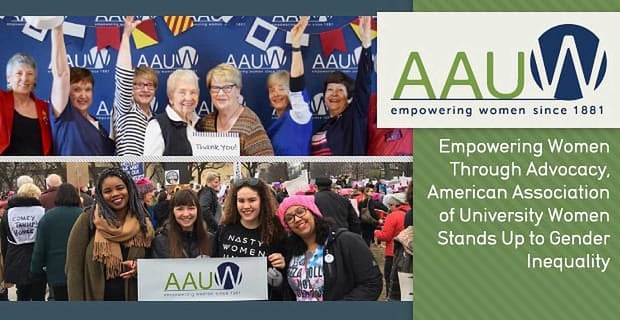 The Short Version: Violence against women, misogyny, sexism, and an existing patriarchal system are issues that persist in our society, and while the feminist movement has come a long way, there’s still a lot of work to be done to reach true equality. Established in 1881, the American Association of University Women (AAUW) is the nation’s leading champion for women’s rights, equity, and education for women. Through research, grants, and advocacy programs, the grassroots organization empowers women and young girls in all aspects of their lives, which includes when they’re dating or in a relationship.

Progress in areas of gender equality has certainly accelerated, moving in a very positive direction since the famed women’s rights convention in Seneca Falls, New York, in 1848. Despite the many breakthroughs over the years, however, a gender bias still exists in American society, which sometimes rears its ugly head in the context of relationships or dating.

Inequality issues are frequent topics of discussion on college campuses, but gender bias extends beyond scholarly endeavors and into the corporate world, politics, and even relationships. This bias often manifests as sexual discrimination or harassment but can even escalate into violence. For instance, the National Coalition Against Domestic Violence reports nearly 20 people are physically abused by a partner each minute, with the majority of the victims being women.

The American Association of University Women (AAUW) was established in 1881 in order to promote equity and education for women and to help bridge the gender gap. The grassroots organization acts as an advocate for women’s empowerment throughout the United States.

Among its many initiatives, the association provides grants for female-led college programs, campaigns for public policies that protect women, hosts informative workshops, and funds educational opportunities on issues important to women. The AAUW’s primary purpose is to break through barriers to ensure women are given a fair and equal chance.

Articles and Research on Issues That Safeguard Women’s Rights

AAUW features timely articles covering the most current issues regarding women’s rights. The organization also analyzes gender inequalities in education and in the workplace through extensive research. This research influences everything from sexual harassment in schools and on college campuses to the pay gap between men and women.

The research and information provided are valuable resources, helping women protect their rights through education. As long as women continue to take a stand, collectively, they can make tremendous progress toward bridging the gender gap.

Sexual harassment can take many different forms, including aggressive behavior and gender bias.

In the AAUW article, “How to Speak Up Against Everyday Bias,” author Lisa Maatz illustrates a variety of common scenarios where women are frequently the target of sexual harassment. She references situations, like street harassment and online sexism, suggesting women no longer need to accept harassment as the status quo. By staying aware of their rights, not engaging, and speaking up, women can take their power back in these types of encounters.

AAUW also reports on issues involving everything from human trafficking to statistics on sexual assault and the ways we can fight against assault on campuses. By speaking at National Press Club events, providing educational funding, and supporting federal court cases involving sexual discrimination at school and in the workplace, the organization remains active in the fight against sexual harassment.

Dismantling the patriarchy remains an uphill battle, and male-dominated systems, while not as overt as they once were, are still in place. AAUW fights every day for women’s equality in an effort to shatter these ways of thinking.

Author Sarah Best suggests ways women can remain active in the fight for equality in the AAUW article, “5 Ways to Crush the Patriarchy.”

Certainly, there are moments in history, depending on the current politics of the nation, when things are more unfairly skewed in the direction of a patriarchal system than others. During these times, important legislation like Roe v. Wade are attacked, threatening a woman’s right to choose. AAUW suggests hosting a pro-choice rally on a busy part of campus or volunteering at a local clinic to raise awareness of a critical issue.

Essentially, everything AAUW does and stands for is aimed at fostering a gender-neutral society. We’ve come a very long way since 1881, and this ever-growing organization has no plans to stop fighting the good fight.

Violence Against Women: Exposing a Rampant Issue on College Campuses

According to a government-conducted survey, one in five women is a target of sexual assault while in college. This may seem like an alarming statistic, and it should be. It’s a very real threat, and AAUW shares ways women can fight against sexual assault on campus while helping to raise the student body’s awareness.

In the article, “10 Ways to Fight Against Sexual Assault on Campus,” Ivonne Ramirez uses the analogy that the likelihood of a woman being sexually assaulted during college is almost the same as her likelihood of catching the flu.

One of the issues AAUW covers is violence against women, which can certainly have ugly ramifications in a dating or relationship context.

“She can’t just take Nyquil and rest in bed for a few days. Sexual assault has a lasting effect on students,” Ramirez wrote in the article.

Ramirez encourages female students to know their rights when it comes to sex-based discrimination in education and to use social media tools to help spread awareness. She also encourages students to volunteer for local rape crisis centers or get involved in national campaigns dedicated to raising awareness and taking action against issues involving sexual assault and violence against women.

Continuing a Mission for Equality That Began 125 Years Ago

AAUW has been playing a critical role in women’s history since the late 19th century. Throughout history, the organization has taken positions on women’s issues, including those of an economic, social, and political nature.

Founders Marion Talbot and Ellen Richards first met in Boston with 15 alumni representing eight different colleges in order to discuss the needs of college-educated women in areas related to equality.

Members of the organization have since worked together to improve the lives of millions of women and families. They achieve this through research programs, case support, educational funding, and salary negotiation. The idea is to inspire action among women who can’t afford to give up any ground after coming this far in their struggle.

There are many ways to get involved with AAUW — from taking action online to joining its community and making a donation.

With more than 170,000 members and supporters to date, AAUW has been a powerful force in promoting and advancing women’s rights and equity in education and other areas of life.

AAUW counts 170,000 among its members and supporters with 1,000 local branches and 800 college and university partners.

Through grants, educational programs, research, and advocacy for all things related to women’s rights, the nonprofit organization has improved the lives of millions. It’s also laid a foundation for defeating gender bias, moving forward, and continuing to fight for equality in education, at home, and in the workplace.

AAUW is a catalyst for change. The organization empowers women and young girls to stand up for their rights and raise up and encourage the women around them to do the same.

Thanks to the trailblazers that make up the organization, the women’s rights movement has advanced in some very big ways. There might be momentary setbacks along the way, but history shows long-term growth and progress are ever imminent.