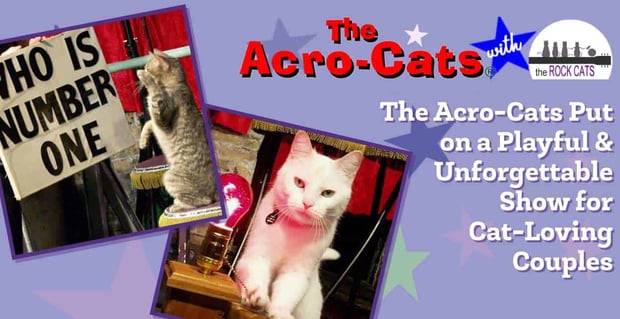 The Short Version: The Acro-Cats is a one-of-a-kind traveling show featuring intelligent, curious, and funny cats performing in rock bands and acrocatic feats. Over the last decade, expert animal trainer Samantha Martin has coaxed a team of rescue cats to jump through hoops, hoist flags, play drums, ride skateboards, and do a number of other impressive tricks. The Acro-Cats show is a purr-fect date activity for cat lovers looking to add some extra cuteness to their lives, and it’s fun to see how agile, affectionate, and amazing domestic cats can be.

Cat lovers are a special breed of person. They tend to appreciate quirkiness, respect independence, and have a lot of love to give. It’s only natural that cat lovers gravitate toward one another in the dating scene, and many couples have feline fur babies that keep them laughing and talking throughout the day.

Animal trainer Samantha Martin created the Acro-Cats to show people how cool cats can be.

Cat-themed dates can give couples the opportunity to bond over their shared interests and make special memories together.

If you want to whisk a cat-loving date off his or her feet, you can attend a cat-led show and watch cats perform acro-catics. Since 2012, the Acro-Cats have leapt into many people’s hearts and made a name for themselves by featuring stunning feats of agility and cleverness.

The Acro-Cats show started in Chicago and has since moved to Georgia where the trainers now work with the cats and organize tours through the U.S.

People flock to see the Acro-Cats, and some couples have even gotten engaged at the show. The team told us the story of one couple who shared a special proposal during one of the acts and are now planning to have the Acro-Cats headline their wedding as ring bearers and flower girls.

Whether the Acro-Cats are rocking out in a band, leaping over obstacles, or ushering couples down the aisle, their lovable personalities are always at the heart of every purr-formance.

“We really focus on the cats,” said Polly Smith, the Production Manager for the show. “They are the real stars here.”

The Acro-Cats show features cathletic felines who like to jump and climb as well as mew-sical cats, who play drums and strum a guitar on cue. The Rock Cats band is one of the more popular acts in the lineup. It’s playful, unexpected, and just plain adorable. The cats actually play instruments, and they even have a music video. The Rock Cats started out with three band members, and now eight cats can participate in the jam session.

The Acro-Cats troupe has over two dozen talented felines in its ranks, and the cats are constantly showing off their graceful moves and charming sense of humor.

All cats in the Acro-Cats show are rescues trained by Samantha Martin, an animal behavior expert and proud cat lady. Samantha has an associate’s degree in animal husbandry and services, and she has developed clicker training techniques to encourage clever cats to become star performers in commercials, music videos, and live shows.

Cats are famous for being uncooperative in the face of training, but Samantha has put in long hours to build trust with them. She meets the cats on their terms and doesn’t force them to do a trick they don’t want to do.

The Acro-Cats prove that cats are highly intelligent and trainable, given the right incentives. Samantha said she uses the Acro-Cats shows as an opportunity to raise awareness about cat training techniques and teach people how to better communicate and bond with these amazing animals.

“Clicker Training helps create a bond with cat and human,” Polly said. “They become a family member and not a disposable pet.”

A Purr-fect Date Activity for the Whole Family

Every cat in the Acro-Cats has a unique personality, and the trainers respect those differences in style, skill, and temperament. They pay close attention to how the cat acts to gauge how to bring out his or her best performance.

One Acro-Cats star holds a world record for jumping a six-foot distance.

For instance, a shy rescue named Alley seemed to enjoy jumping, so Samantha challenged her to jump increasingly long distances from one platform to another. Alley now holds the Guinness World Record for the longest cat jump, measuring over six feet.

The Acro-Cats shows feature many jaw-dropping and laugh-inducing performances, and every performance is a little different because of the unique cattitude on display.

The trainers will open the carrier and see if a cat wants to come out and do a trick. Sometimes the cats are eager to strut their stuff, and other times they’d rather stay inside, thank you very much. Samantha and her team do not force the cats to do anything they don’t feel like doing, and that can make for some pretty amusing on-stage antics.

The Acro-Cats are based in Chicago, but they travel across the country in a tour bus to bring the show to new audiences. You can check out the schedule here and start planning a cat-tastic date. Some of the venues even include a cash bar.

“I’m so smitten by Samantha and her wonderful performing kittens,” said one audience member. “Unlikely to find a move unique and pleasurable experience in live performance.”

This unorthodox show appeals to people of all ages and backgrounds. The audience includes families with small children, young couples on a date, and groups of retirees. Polly told us couples tend to make up a majority of the Acro-Cats audience. The Acro-Cats can offer a fun date activity full of good humor and impressive sights. Plus, you can come up to meet and pet the cats after the show.

Very Important Cat People (VICP) tickets include a meet-and-greet event with the Rock Cats, who love getting compliments and pets from their doting fans.

Join the Acro-Cats Fan Club to Get the Latest Mews

Cat lovers share one very important thing in common — they are passionate about their pets and adore furry felines of all shapes and sizes. The Acro-Cats team celebrates cats and sees each performance as an opportunity to strengthen the relationship between humans and cats.

If you want to find out what the Acro-Cats are up to, you can join the Facebook group, which currently has nearly 10,000 fans, and hear about the cats, the team, and the latest goings-on. The Acro-Cats events are full of fun and personality, and the kindhearted team makes an effort to promote the welfare of cats everywhere.

“We work with a lot of local rescues, and we like to partner with them by donating a portion of our profits and offering clicker training sessions to their staff,” Polly said. “There will always be new cats and new tricks.”