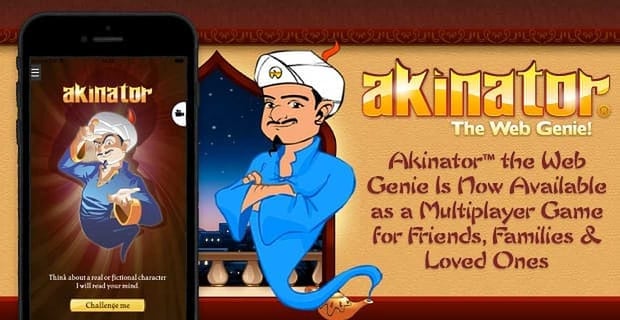 Akinator™ the Web Genie Is Now Available as a Multiplayer Game for Friends, Families & Loved Ones

The Short Version: Legend has it a magical genie called Akinator can guess the name of any famous person or fictional character you can think of by asking a few questions. Don’t believe it? Then play Akinator online or on the app, and prepare to be amazed. The genie is always up for a challenge. Millions of people around the world have played this unique guessing game, and the artificial intelligence algorithm has built a vast knowledge base of popular and obscure characters, including Thomas the Tank Engine, Barbie, Voldemort, and Carrie Fisher. Akinator is available on Google Play, the Apple Store, and also on Alexa, and now it’s even a multiplayer game for the Apple TV. Couples, family, and friends can put each other to the test and see who’s a better guesser by playing Akinator & Co together. The Akinator game gives people an entertaining way to loosen up, flex their pop culture knowledge, and discover common interests with a significant other.

My family often plays games on long car trips to pass the time. I Spy is all well and good, but we especially enjoy brain teaser games to keep us sharp throughout the drive. One time, my brother was sitting in the back seat when he suggested we play 20 Questions. He volunteered to be the guesser first, and we’d switch off once he guessed wrong.

Except he never did. My parents and I kept trying to stump him, but he knew what we were thinking every time. After 20 questions, he’d guess correctly, laugh, and say, “Try again.”

Then he mispronounced the name Tintin, a comic book detective, and we realized something was amiss. I snatched my brother’s phone from his hands and realized he had been cheating by using Akinator to ask questions and make guesses. He had us fooled for a while, but we caught on in the end.

Now, Akinator is our go-to family car game because it’s so challenging to try to outsmart the genie. We enjoy working together to brainstorm obscure characters and decide how to answer certain questions. Sometimes we end up in debates over whether Severus Snape really fights evil or if “Stranger Things” counts as a kid’s show. The game incites a lively conversation and keeps us laughing for hours and hours.

By asking simple questions, Akinator zeroes in on whatever person or character is in your mind.

Playing Akinator’s 20 questions game is an excellent choice for any date night, game night, or family night. You won’t be bored as you try to stump this all-knowing AI. For the past decade, Akinator has honed a sure-fire system to guess pretty much any real-life or fictional character you could possibly think of — within 20 questions! While it’s not infallible, it’s certainly a much better guesser than my brother is.

We recommend playing the newly released Akinator and Co, available on Apple TV, to spice up your next game night with some interactive fun. You can learn about your date’s favorite shows, fictional characters, and role models while showing off your own pop culture knowledge.

As Akinator’s Chief Marketing Officer Jérôme Soreau said, “It’s very fun. We tested the game with our own families and friends, and we found that people are laughing — people want to guess the name first.”

The Legend Sprang From Curious Minds & a Magic Lamp

Akinator’s origin is shrouded in mystery and wonder. Since 2007, many have challenged the genie to read their minds and then said in exasperation, “What? How the heck did it know that?!” The talented guessing machine seems too good to be true. Where could it have come from? Well, you may not believe where the Founders say they got their inspiration.

You can read the full fantastical story of their discovery of the genie on Akinator’s website. Yes, even genies have websites these days.

“He wants to discover characters; then we’ll give him what he wants.” — Arnaud, Founder of Akinator.com

Legend says that two Frenchmen were crossing a desert in the Far East when a sparkling object caught their eye. It was an ancient oil lamp uncovered by the sands of time.

After rubbing the lamp three times, a cloud of smoke erupted from it, and there before them floated the magic genie known as Akinator. This persistently playful genie claimed he could guess any real or fictional character by asking a few simple questions. He was so good at it (and so persistently playful) that the men decided to create a website to house the wondrously talented guesswork of Akinator.

Today, millions of people turn to Akinator for a fun and mystical experience. Wherever it came from, this shrewd (and sometimes smug) genie takes the game of 20 Questions to a whole new level.

Challenge the All-Knowing Bot to Read Your Mind

If you love playing Akinator on your laptop or your smartphone, you aren’t alone. Millions of people challenge the genie to a round of 20 Questions. Every month, the app has over 5 million active users, and the website sees over 3 million visitors. These people come from all over the globe to try their luck.

Sometimes, if you’re clever, you can come up with a character Akinator doesn’t know about.

Akinator speaks over 16 languages, so its guessing prowess has become a worldwide phenomena. The largest share of users come from the US, Europe, Japan, Russia, and Brazil. Jérôme told us the target audience is teenagers and young adults (many of whom are active daters as well).

You can capture someone’s interest on a date night by pulling up Akinator on your phone and playing a few rounds with someone special. While the original Akinator game is one-player, you can work together with your date to come up with characters and answer the genie’s questions. Playing the game together is a fantastic way to lighten the evening and find common interests with your date.

Akinator & Co Offers a Fun Way to Liven Up a Date

You may not have heard about Akinator & Co yet because it only just launched last year. The unique multiplayer game takes the essential idea of Akinator guessing game and turned it into a family-friendly game played on Apple TV. According to Jérôme, “Its main feature is that you play with people. It’s like a battle to see who can guess the character first.”

Each player gets a fun animal avatar — anything from a parrot to a tiger — and then Player One starts by choosing a character name from a list provided by Akinator. The other players mustn’t see this selection because they’ll be trying to guess the character using the Akinator’s questions and Player One’s answers as clues.

Akinator & Co keeps track of how many questions have been asked and what the right answers are, so the guessing game is easy to play and enjoy.

After a few questions, the game pauses and lets the other players try to guess the character. Whoever guesses first, within the allotted time, wins. Player One earns points for every question asked and will win all the points if no one guesses right within 20 questions. After 20 questions, the game will show certain letters within the character name to give players a final hint.

What’s great about this game is the transparency. It’s not possible for Player One to cheat or answer questions incorrectly because the Akinator is overseeing it all. After the round, the players can rotate and let someone else pick a character and try to stump the group.

“People love it because they can play together,” Jérôme said. “At the end, Akinator adds up the scores from all the rounds and shows the avatars on podiums for first, second, and third place.”

Akinator: Play on Your Own or With Someone Special

Years back, my brother had thought he could pass himself off as a 20-questions genie, but there’s only one Akinator. We soon discovered his trick, but we weren’t even upset about it because we were so intrigued by the game’s promise that it could always guess whatever character you picked.

From Kim Possible to Charlie Chaplin, Akinator has an uncanny ability to know what I’m thinking based on my answers to simple questions. It’s fun when it guesses correctly out of nowhere, and it’s even more fun when I manage to stump the genie!

Whether you’re playing by yourself or with loved ones, Akinator gets your creative juices flowing and gives you an entertaining way to pass the time. Couples, family, and friends can use the game to learn about each other’s interests and come closer together. The addictive competitive game puts a creative spin on a classic game and has delighted millions of players from all walks of life.

Next time you’re planning a date night, you can download Akinator & Co on iTunes to challenge your date to an engaging game of guesswork and gaiety. Have fun!