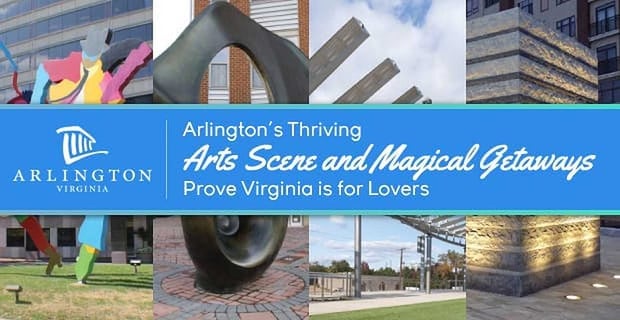 The Short Version: Just across the Potomac River from Washington, DC, is Arlington, Virginia, a bustling county boasting iconic landmarks, a booming arts and culture scene, lively neighborhoods, and a bounty of dining, shopping, and lodging options. Originally called Alexandria, the county was renamed after the Artlington House in 1920 and today consists of number of unique urban villages — from Clarendon and Columbia Pike to Courthouse and Crystal City. Whether you’re looking to explore the region’s food trucks and farmers markets, planning a spa getaway, or wanting to take in some of the best public art displays found in the country, Arlington offers romantic retreats where couples can escape year round.

Known for its proximity to Washington, DC, Arlington, Virginia, is much more than a meeting ground for the political elite. A riverfront metropolis with tree-lined streets and historic architecture, the county’s thriving arts and culture scene boosted by Arlington’s Public Art Program creates a unique setting for magical couple’s getaways proving that, as the state motto declares, Virginia is for Lovers.

“We have over 60 permanent works of public art,” said Angela Anderson Adams, Director of Arlington Public Art. “Some of them are very bold and easy to find, and others are hidden gems.”

Aside from the county’s extensive public art collection, Arlington is home to rich cultural history boasting modern cuisine and nightlife — as well as dozens of eclectic lodging offerings perfect for weekend retreats or multi-week adventures.

“The idea of creating your own tour, exploring on your own in tandem with some of the great restaurants that people come to Arlington for, would be a really fun thing to do on a date,” Angela said.

If you’re looking to tie the knot in an aesthetically pleasing cityscape, look no further than this one-of-a-kind locale on the Potomac River. TheKnot.com features a comprehensive list of more than 1,200 wedding vendors in the area that can help arrange your big day in an array of settings — from a grand event in the ballrooms of the Westin Arlington Gateway hotel to a quaint ceremony in front of the county’s many public art displays.

Angela told us Arlington’s public art collection creates an atmosphere that’s ideal for romantic dates and getaways. Among her favorites, Wave Arbor is a two-part kinetic wind-activated sculpture designed by Douglas Hollis for Long Bridge Park. Another work of marvel, Wonder Wander presents two monumental granite monoliths created by Larry Kirkland and is positioned as the centerpiece of the National Gateway development.

“We have an incredible installation that went up recently along the bike trail along Four Mile Run Stream,” Angela said of Ripple.

This massive piece consists of 800 linear feet of undulating fence panels built to be reminiscent of the flow of water. Complementing Ripple is Watermarks, a collection of thermoplastic design elements marking underground stormwater pipes.

“It’s better enjoyed on a bike, so you can see it moving at a certain pace,” Angela said. “It makes the art a little more interesting.”

Aside from developing and promoting public art initiatives in Arlington, Angela and her team also create and map out self-guided tours of the various works — perfect for a romantic walking date encouraging exploration and sparking dialogue. Fee tour guides and maps can be found on Arlington’s Public Arts website in the tours section.

“Those are the kinds of things I think people enjoy finding on their own and interacting with in various ways,” she said. “We have one called Echo in Penrose Square along Columbia Pike.”

Angela told us the piece was inspired by the Three Sisters Radio Towers, which broadcasted the Navy’s first transatlantic radio signal, connecting Arlington with the Eiffel Tower in Paris — another city famous for inspiring love.

Brimming with famous landmarks, such as Fort Ethan Allen, Glebe House, Green Valley Pharmacy, and Hume School, Arlington has a rich cultural history dating back centuries. It’s also home to more than 70 buildings, sites, and neighborhoods listed in the National Register of Historic Places and continues to take pride in the people, places, and events that have made it one of the most celebrated locales in America.

After a full day of public art exploration and taking in the historical sites, choose from hundreds of eclectic cuisine and nightlife offerings, including live comedy, salsa dancing, sports bars, and wine tastings.

If your idea of a romantic getaway includes exploring the nearby nightlife scene, Arlington has you covered. The county has a bit of something for everyone. Galaxy Hut offers up live music, karaoke, and old-school video games just a few blocks from the Clarendon and Courthouse metro stations. The bar has 28 ever-changing taps that highlight small-batch and hard-to-find brews.

If a nightclub vibe is more your thing, Clarendon Ballroom’s 3,000-square-foot dance floor is the perfect place to cut a rug and spend time with the one you love. Also look into Clarendon Grill, Whitlow’s on Wilson, and couples’ salsa lessons at The Salsa Room.

Lodging That Caters to Weekend Retreats or Multi-Week Adventures

With most of Arlington’s hotels within three miles of downtown DC and an average of 20% less expensive than staying in the nation’s capital, it’s a great locale for a weekend retreat or multi-week adventure.

The Ritz-Carlton Pentagon City on South Hayes Street offers contemporary elegance and luxury amenities moments away from historic landmarks, museums, and shopping. Whether you’re celebrating a milestone anniversary, honeymoon, or just need time to reconnect, the hotel’s special occasions package is tailor-made for couples looking for an unforgettable romantic retreat. Charm your special someone with champagne upon arrival, rose petal turndown and breakfast in bed.

The Residence Inn Rosslyn on North Oak Street is conveniently located near Arlington National Cemetery and both Reagan National Airport and Dulles International Airport. It’s also central to the birthplace of public art in Arlington — adding to the county’s romantic walkable cityscape.

“In the mid-70s, Rosslyn was going through its first wave of development where we were starting to get taller buildings to create the skyline that we have now,” Angela said. “We actually just won an award for a project that we did in Rosslyn called Quill, which is really quite stunning. It’s 20,000 reflective discs that create this pattern of feathers and it glows in the dark; it’s an unusual thing you don’t expect to see.”

From a small, intimate ceremony with your closest family and friends to a massive reception to celebrate your “I Dos,” Arlington’s aesthetically pleasing cityscape is the perfect place for a destination wedding steeped in rich cultural history.

Check out Top of the Town, a penthouse ballroom with large, private terrace and panoramic views across the Potomac River of the Washington Monument, the Lincoln Memorial, the Jefferson Memorial, and more. The venue, which holds between 150 and 200 guests, is located just five blocks south of Rosslyn Metro Station and within walking distance of numerous hotels.

The Washington Post called the venue, “A spectacular wall-to-wall vista overlooking the monuments on the Mall and seemingly everything else in the Washington area,” while Washington Magazine said it has “the best view in town.”

Whether you’re traveling to Arlington to exchange vows or simply enjoy a new destination with your special someone, you’re sure to fall in love with the county’s people and culture.