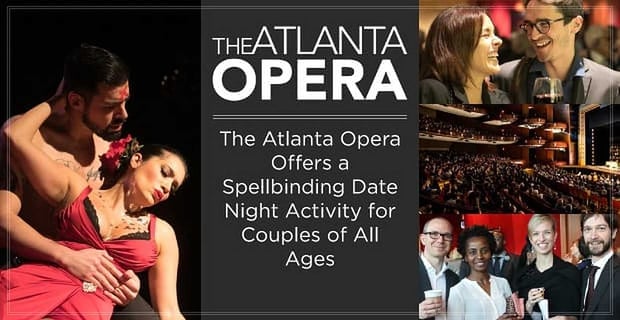 The Short Version: By sticking to familiar settings and monotonous date night routines, some couples get stuck in a dating rut and let the romance in their relationships slip away. However, a night at the opera can evoke powerful emotions and engage people’s imaginations. Every year, the Atlanta Opera wows audiences with its classic, edgy, and breathtaking opera performances. A talented company produces classics, like “Carmen,” and modern interpretations, like “Sweeney Todd,” to excite theater goers of all ages. When you take a date to dinner and the opera, you have the chance to connect through a grand emotional experience. If you ever feel like getting away from the everyday and elevating your date nights, you can visit the Atlanta Opera where larger-than-life performances put people in a romantic frame of mind.

A French composer wrote “Carmen” in 1875, and yet the finale of the four-act opera still stuns audiences around the world. The feisty and beautiful Spanish gypsy seduces a soldier and falls in love with a bullfighter, only to meet a tragic death at the hands of her spurned love.

Many of the show’s songs, particularly “Toreador Song,” have stood the test of time and become a paragon of classic opera performances.

In April 2018, the Atlanta Opera will present a passionate rendition of “Carmen” on its mainstage with subtitles projected above the stage to help non-French speakers understand the drama and the torment of the love triangle between Carmen, José, and Escamillo.

Scott Hazleton, Director of Media and Communications for the Atlanta Opera, told us the opera draws people together through larger-than-life storytelling, and, even if it doesn’t always end happily, the show sweeps people into another time and place.

“You put down your cellphone for a few hours and lose yourself in the performance,” he said. “It’s an experience you remember. Even people who haven’t seen ‘Carmen’ can recognize its songs.”

Since 1979, the Atlanta Opera has beckoned everyday people into a world of imagination and drama. Its modern take on classic performances gives theater goers something to talk about during intermission and after the show. You can take a date to the opera house to immerse yourself in romance and set the stage for an intimate experience laughing, applauding, and perhaps even tearing up during a world-class show.

“No matter what age you are, this is an awesome place to take a date,” Scott said. “We see opera as a grand experience, and we’re developing many innovative programs and productions to take our opera company to the next level.”

In 2013, Tomer Zvulun took over as the new General and Artistic Director of the Atlanta Opera, and he immediately began positioning the company to cater to a younger audience by putting traditional productions into a modern context. He pioneered the Discoveries series in 2015 to give people a fresh perspective on opera performances by taking them to unorthodox venues, including a burlesque hall and the botanical garden.

The Discoveries series has been an award-winning hallmark of the Atlanta Opera for the last couple years. “It’s for people who are looking for new ideas and a more intimate setting at the opera,” Scott said. “We put on two shows a year, and they’ve sold out the last two seasons.”

The Discoveries series is an excellent opportunity for daters who want to shake things up because the shows are shorter, the audiences are smaller, and the atmosphere is uniquely intimate.

The Atlanta Opera’s seasonal performances speak to the broad scope of human emotion.

The Atlanta Opera prides itself on re-imagining the opera through a contemporary lens, so you’ll find classic stories performed by actors garbed in black leather and popular modern-day shows, including “Sweeney Todd,” presented in the evocative tone of an opera. Scott said next year the company will take on “West Side Story,” which he describes as “a love story rooted in opera.”

You can subscribe to the Atlanta Opera to guarantee yourself first pick of the best seats for every performance. Subscribers also receive discounts on tickets and souvenirs at Shop Opera. If you and your date plan to go to multiple shows a year, it’s worth looking into a subscription package to save money on every show.

Additionally, the Student Short, Studio Tour, and other educational programs reach out to 17,000 students a year to show them how fun, exciting, and current the opera can be. Scott said the opera has widespread appeal, entertaining kindergartners, teenagers, young adults, and seniors with thrilling vocal performances, colorful costumes, and thought-provoking dramas.

“We see around 400,000 people every year,” he told us. “We have an incredibly broad base of attendees, and that’s a testament to everyone who works hard to make these shows happen.”

The Atlanta Opera offers a range of engaging ways to enjoy its shows, so attendees aren’t showing up to the theater and sitting in silence for a few hours. You can make your opera night a more social experience by checking out the opera house’s original programming and ticketing types.

Opera’s Night Out is a pre-show social event tailored to opera fans under 40.

For instance, Opera’s Night Out is a pre-party event geared toward young professionals in the area. Every Friday, the Atlanta Opera hosts a cocktail hour for attendees between 21 and 40 years old. The ticket price includes a free drink in a semi-private area at the Cobb Energy Centre. The $40 ticket offers a wonderful budget-friendly opportunity for young singles and couples to mix and mingle.

You can also attend a one-hour pre-opera talk, included free with all ticket types, led by opera aficionados. The informative lecture gives audience members context for the show they’re about to see and helps them understand all the craft, symbolism, and artistry involved in the performance.

Mangia! is yet another enjoyable way to experience the Atlanta Opera’s acclaimed productions. This dinner or brunch add-on pairs fine dining with the opera, giving foodies and theater lovers an evening of delights. Mangia! includes a three-course meal and a glass of red or white wine. These tickets cost $55 for dinners and $42.50 for brunches.

If you enjoy omelets, pancakes, and breakfast foods, you should definitely aim for a Sunday matinee and pre-show brunch at the opera house. Mangia! is ideal for daters because you can savor delicious foods while discussing the opera and sipping wine.

“Delightful experience. Impressed by the chorus and stage production,” said one attendee in a review. “My husband, who’s not an opera fan, called it ‘magnificent.'”

Scott described the Atlanta Opera as an eclectic group of singers, musicians, prop masters, choreographers, and other professionals. They all bring a different skill set to the stage, and they rely on each other to produce memorable performances of contemporary and classic works. The company’s combined artistry, talent, and imagination make each show a success.

Many diverse voices join together and collaborate to produce award-winning performances at the Cobb Energy Performing Arts Centre.

Obviously, the actors and actresses on stage deserve the standing ovations they so often receive, but, if you look behind the curtain, you’d find a company of 300 or so people coming together to support their performance. People come from around the world to play a role in the opera house’s productions.

“We’re a mixed bag,” Scott said. “It’s a younger group of people with unique skill sets, and everyone is very passionate about opera and the arts in general.”

The highly trained thespians, techs, and other artists put their all into making an unforgettable experience at the opera house because they believe in the power of storytelling to change hearts and minds. Currently, the Atlanta Opera is cultivating a new generation of singing talent by running an educational studio program for aspiring opera singers.

“We have some very talented singers,” Scott said. “You’ll see some of these singers coming out of Atlanta and performing around the world in a few years’ time.”

The Atlanta Opera: Re-Imagining Classics for a New Generation

Opera’s unique blend of story, music, and dance captivate audiences and keep them talking long after they’ve left the theater. It’s something that stays with people, making an indelible impression on modern-day culture.

While you may not know the story of “Carmen” by heart, you probably know many of its popular songs and can hum along even if you’re unsure of the words. A spirited performance of “Carmen” is perfect for any date night because the show’s seductive songs, romantic plot, and heartrending conclusion prompt audiences to ponder the life-changing ways of love. You can book tickets at the Atlanta Opera for this show (or another upcoming show) the next time you want to impress a date at a classy yet accessible event.

Whether you’re going to a mainstage production of a classic opera or a contemporary performance of a Broadway musical, you’ll find yourself transported by the fantastic talents of the Atlanta Opera.

“We are storytellers,” Scott said. “These performances are set to some of the greatest music there is — music that has lasted through the centuries — but we put a new twist on it, so it’s definitely for a 21st-century audience.”