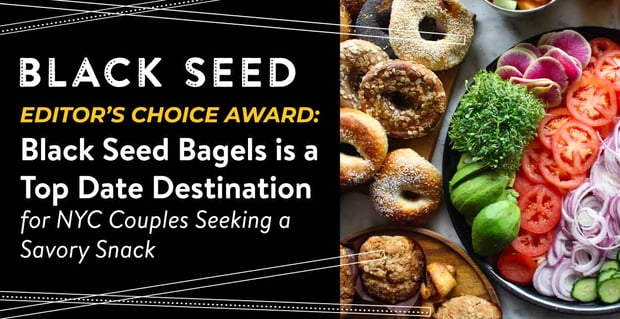 The Short Version: Black Seed Bagels has given New York-style bagels a new twist by baking them fresh in a wood-fired oven and covering them with seeds. In 2014, award-winning pastry chef Dianna Daoheung crafted an original bagel recipe that took the city by storm and turned Black Seed into a must-visit destination for bagel lovers across the country. Whether you’re hankering for a breakfast sandwich, a pizza bagel, or good old-fashioned bagels and lox, you can’t go wrong on Black Seed’s menu. Thanks to its quality ingredients and chill vibes, Black Seed is a fantastic date spot for couples who want to start the day on a delicious note.

The bagel sensation known as Black Seed began with a friendship between two New York foodies. Restaurant operators Matt Kliegman and Noah Brenamoff have inspired separately a long list of highly successful restaurants, including The Smile, Celestine, and Grand Army Bar. Finally, they put their heads together to get into the bagel business.

Since 2014, Black Seed has become a beloved bagel shop with six locations in NYC.

During the aftermath of Hurricane Sandy, Matt and Noah spent many mornings having coffee together. They started calling this ritual “the kvetcher’s club” because they often discussed hurricane damage, the lack of good bagels in town, and other everyday problems. However, the pair did more than just complain — they formed a business partnership that would turn their fortunes around.

Matt and Noah realized they couldn’t be the only New Yorkers hankering for a decent and convenient breakfast. They couldn’t find a local bagel shop that met their standards, so they decided to create it from scratch.

The pair approached professional chef Dianna Daoheung to be the third pillar of their new upscale bagel shop. She was working as a sous chef at Isa in Williamsburg, but she was intrigued by the challenge of baking the perfect bagel.

So, Dianna experimented with different recipes and techniques to elevate the classic New York-style bagel into a golden, airy, and delicious treat covered in the bagel shop’s signature black seeds.

In 2014, the first Black Seed location opened its doors, and it was an instant hit. The unique and flavorful bagels made headlines, attracting customers from all walks of life. Today, you’ll see many couples sitting close together at Black Seed and enjoying a low-key coffee-and-bagel date in New York City.

“Black Seed is a perfect breakfast or lunch time date spot,” Dianna said. “Our stores, located around Manhattan and in Brooklyn, are casual and welcoming, giving off just the right vibe for getting to know someone.”

In New York City, a bagel shop is pretty much around every corner, but none are quite like Black Seed. Its artisan creations have turned heads and made the Black Seed menu stand out in a famously competitive culinary scene.

Black Seed bagels represent a blending of two baking traditions and styles. Dianna draws inspiration from New York’s light and airy bagels — she uses a naturally leavened dough with a pinch of salt — but she has also mixed in a few Montreal-style techniques, including baking the dough in a wood-fired oven.

Dianna has crafted an original bagel recipe that starts with a fermented dough being boiled in a solution of honey and water. Then the chefs generously sprinkle seeds on the dough, and, for the grand finale, bake it to the ideal crispness and density. Every step of this process requires hands-on attention and care to see that the bagels come out perfectly and meet Black Seed’s high standards.

Black Seed continually innovates inside and outside the kitchen to create a memorable dining experience. Every month, the bagel shop collaborates with a local chef to make a one-of-a-kind Bagel of the Month.

Some individuals stop by Black Seed for a bagel to take to work, while others plan first dates in this casual setting. It’s a great place to indulge your senses and bring extra quality to your breakfast plate.

Of course, bagels aren’t the only thing on the menu here. Customers can also order coffee, pastries, and salads to pair with their breakfast. Dianna assures us these menu items are “made with the same love, care and homemade ethos as our bagels.”

Locals Appreciate the Care Put in Every Dish

Many out-of-towners seek out Black Seed because they’ve heard it’s a must-visit destination for bagel lovers in NYC, but locals have a lot of love for these original bagels, too.

“I loved the taste/smell of their oven on the bagels,” said Angie K., a Brooklyn resident, in a Yelp review. “Their baking style definitely adds a different dimension of flavor to their bagels.”

“Not sure how this place doesn’t have five stars because it’s my favorite place in the city,” said Paige W., a New Yorker who frequently braves the crowds and long lines for a bite of Black Seed’s bagels.

Lauren Paige R. visited Black Seed because of her boyfriend and loved the hip atmosphere. “Having a cute Jewish boyfriend has never steered me wrong,” she said. “This is not your typical kind of bagel.”

Black Seed doesn’t settle for anything less than the best ingredients in and on its bagels. The kitchen gets its honey from Upstate New York, its mozzarella from Di Palo’s in Little Italy, and its high-gluten flour from Vermont. The bagel shop can also make a mean gluten-free bagel to satisfy customers with dietary restrictions.

From fresh salads to indulgent bagel sandwiches, Black Seed has a little something for everyone on its menu, and its bagels cut neatly in half so couples can share — if they’re feeling generous.

“The great thing about bagels is that most everyone loves them,” Dianna said. “We are lucky to have a variety of customers, from our loyal guests who come in regularly for a bagel and coffee to the food lovers who come to check out our monthly chef collaboration creations.”

A Friendly Team Led by a James Beard Award Finalist

New York City is the promised land for many talented and ambitious individuals. They say if you can make it there, you can make it anywhere. As a two-time nominee for the James Beard Award, Executive Chef Dianna Daoheung has most definitely made it.

Dianna Daoheung was named a finalist for the James Beard Outstanding Baker Award in 2018.

Dianna grew up cooking Thai food with her mother, and she says she has always loved being in the kitchen. However, she didn’t set out to become a professional chef until her mid-20s.

After graduating from the University of Central Florida, Dianna originally moved to NYC to pursue a career in advertising. Four years later, she wasn’t finding satisfaction in her work, so she decided to mix things up  by pursuing her passion for the culinary arts.

Dianna attended the French Culinary Institute and specialized in pastry because that was the area she knew the least about. She soon became fascinated by the science of baking breads and other sweet treats.

Dianna has lent her talents to many critically acclaimed restaurants over the years. However, she said Black Seed Bagel means something special to her. She created its signature recipes, and she leads its culinary team, so its success and popularity has been a seal of approval for the young chef.

“My passion for baking developed at a young age in the kitchen with my mom,” Dianna said, “so the opportunity to offer those experiences to a wide range of people has been wonderful for me.”

Since 2014, Black Seed has grown from new restaurant on the block to must-see tourist destination, and the culinary team has been working overtime to meet demands. After years of building its reputation, Black Seed continues to expand and bring its delectable treats to new neighborhoods and boroughs in NYC.

In July 2019, Black Seed opened its first Midtown Manhattan location at 30 Rockefeller Center, and the line there regularly goes out the door as locals and tourists alike seek a hot breakfast, lunchtime treat, or dinner snack to brighten their days.

Whether you stop by on your own or with a date, you can savor an original, award-winning meal at Black Seed. The welcoming atmosphere and the hot, honey-boiled bagels keep people coming back for more.

As Dianna said, “Black Seed’s main goal is to ensure that our customers see the same love, care, and homemade ethos we put into our bagels when they walk into one of our storefronts.”