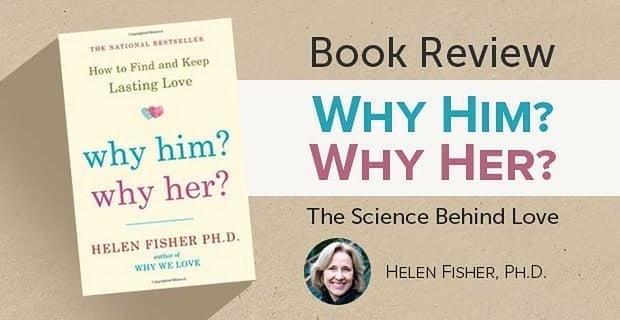 TL;DR: “Why Him? Why Her?” is the groundbreaking book written by Dr. Helen Fisher, Ph.D., that has turned the dating industry upside down. Using a one-of-a-kind personality test, Fisher reveals the biological reasons why we fall in love with one person over another.

Have you ever wondered why you are drawn to and fall in love with certain people? Is it their appearance? Is it their history? Or is it something deeper?

Dr. Helen Fisher, a senior research fellow at the Kinsey Institute, answers these questions and more in her revolutionary book “Why Him? Why Her?: Finding Real Love by Understanding Your Personality Type.”

The journey to bring “Why Him? Why Her?” to life began in 2005, when Match.com approached Fisher with the question, “Why do people fall in love with one person rather than the other?”

Most psychologists say people fall in love with someone who has similar interests and a similar background as them, but Fisher knew there was more to it.

After studying romantic relationships for 30 years, Fisher knew the words we use, our body language and even hormones like estrogen and testosterone can all reveal our personality types, and therefore the type of person we will most likely fall in love with.

“I thought, ‘Could it be that your basic chemistry, which plays out into personality traits, draws you naturally to one person rather than another?'” she said.

Dr. Helen Fisher, author of “Why Him? Why Her?”

Fisher, who has written five books on human sexuality, monogamy, adultery, divorce and gender differences in the brain, used this question as a base to begin a unique personality test for Match’s latest dating site at the time, Chemistry.com.

According to Fisher, understanding which personality style is most dominant will drive people to choose one person to love over others.

“We all have these same brain systems, but some people are going to express them more than others,” she said.

So how do you find out which type you are? You start with Fisher’s survey.

“Why Him? Why Her?” begins with a scientifically developed survey, the same one that appears on Chemistry.com, that consists of 56 questions broken up by each personality type to determine which one is more prevailing for you.

You can strongly disagree, disagree, agree or strongly agree with these statements to see to what degree you express the traits linked to each one of those basic brain systems.

According to her site, “Fisher can tell you what type of person you might have chemistry with and how to find them, attract them and keep them” depending on how you agree or disagree with each statement.

“To my knowledge, it is the first questionnaire that has ever been started from the biology and then brought back to the biology,” she said.

With the personality test also on Chemistry.com, which users have to take before they start receiving matches, Fisher was able to study the personality traits of millions of members and watch them to see who was drawn to whom, who they actually go on dates with and more.

The personality test has now been taken by 13 million people in more than 40 countries.

A great example of this is Hillary and Bill Clinton. According to Fisher, Hillary is high on the testosterone scale and Bill is high on the estrogen scale, so they make a good team because they balance each other out.

Whether single or in a relationship, “Why Him? Why Her?” gives people a better way to understand relationships and provides them with the necessary tools to form and sustain lasting connections.

Once you better understand yourself and others, getting the love you want is as easy as saying “strongly disagree, disagree, agree or strongly agree” on a survey.