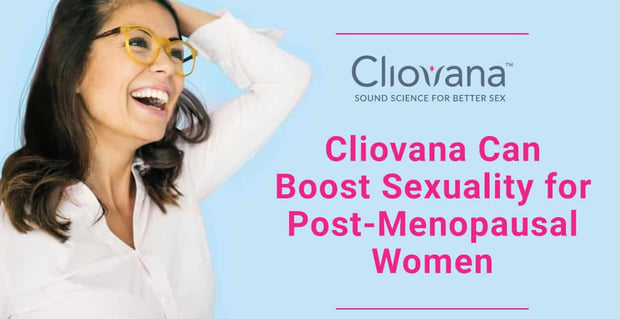 The Short Version: The shift in hormones that leads to menopause can affect mood and diminish sexual desire for many women. Some women may feel more depressed or anxious, while others experience decreased sexual drive or painful intercourse. Cliovana is a non-invasive treatment that uses sound wave therapy to help increase sexual satisfaction for post-menopausal women. The process can result in women finding sex more enjoyable by increasing their clitoral responsiveness. That enjoyment, in turn, can boost overall emotional health.

Menopause can be a difficult time for many women. Some women, especially those who have struggled in the past with depression or anxiety, may experience a resurgence in symptoms caused by a shift in hormones.

The likelihood of depression doubles during this stage of life. But it’s rare that someone who has never struggled with anxiety and depression to develop those symptoms during menopause.

“Midlife — when menopause occurs — is a time when women sometimes face multiple sources of stress, including caring for children, dealing with aging parents, and navigating life changes, all of which may contribute to the incidence of depression and anxiety at this age,” said Harvard Health Publishing.

At the same time, mood disorders and hormone changes can lead to less pleasure during sex. Postmenopausal women may not feel arousal as strongly as they did in the past and may struggle to orgasm. Sex may also become painful.

Cliovana is a treatment that top doctor like women’s urologist and gynecologist Dr. Christi Pramudji use in their office. The non-invasive process involves sound waves that alleviate pain during sex for postmenopausal women while helping them have more powerful orgasms more often.

“For many women, another casualty of the menopause-related problems is the loss of healthy and fulfilling sex life and losing intimacy with a partner — all of which exacerbate an already difficult emotional time in women’s lives,” said a press release from Cliovana.

The Complexities of Postmenopause Arousal

The drop in the level of estrogen in a woman means less blood flows to the vagina, making dryness and pain more likely during intercourse.

Aside from these physical changes, the increased likelihood of mood swings can cause fatigue, low self-esteem, or even Anorgasmia, defined as difficulty having an orgasm.

Women may also have to reconsider their sense of self after menopause.

“Your natural drive may be tempered by your personal attitudes toward sex, which are shaped by your culture, your religious beliefs, your family, your peers, and media influences. The more positive your attitudes are about sex, the greater your desire to be sexual,” wrote The North American Menopause Society.

So if women view themselves differently in midlife, or after menopause, they may have to figure out how that perception impacts the role sex plays in their lives.

The North American Menopause Society also describes how the most complex component of sexuality — motivation — could be influenced by menopause. Motivation is defined as a person’s willingness to have sex at a given time with a specific partner. Women may not often feel desire unless they’re with a caring partner who can understand the physical and emotional changes they face.

But women don’t have to go through these changes alone. Dr. Pramudji said they should talk to their doctors about their struggles rather than face them alone.

“Women’s bodies are going through so many changes during menopause that stress can exacerbate. I hope that women have honest conversations with their doctors about how they feel mentally and emotionally because there is help and support,” she said.

Understanding the complex changes that take place during menopause motivated Dr. Pramudji to develop Cliovana. The process is noninvasive and uses sound wave technology to boost cell regeneration in the genitals.

“For women dealing with the loss of enjoyment with sex, dryness, and pain, my patients have had amazing results with Cliovana. Taking back their sex life has a profound effect on women’s overall health, wellness, and happiness,” said Dr. Pramudji in support of the treatment.

Many clients also share their success stories with Cliovana.

“I was apprehensive about Cliovana until I arrived. From start to finish, it was a great experience — Doctor Oster made me feel totally comfortable, and I was amazed that there was truly no burning, no lasers, no needles, no scalpels, and no pain! I can’t believe the incredible results from such an easy process,” one client wrote in a testimonial.

“Cliovana was a pain-free and extremely simple procedure that had a very real effect on my sexual satisfaction. I immediately noticed an increase in my arousal which led to a better overall sexual experience. Along with an increase in arousal, I also notice an increase in ‘responsiveness/sensitivity,’ which heightens the overall experience,” added another satisfied client.

Approximately 70% of women report not achieving an orgasm during sex with men. That dissatisfaction can become cyclical, especially postmenopause. Decreased arousal from menopause may also lead to changes in clitoral physiology, low stimulation and dryness, which leads to dissatisfaction and lower sexual expectations, all of which cycle back to decreased arousal.

Women can receive Cliovana treatments before or after menopause, and the therapy interrupts the dissatisfaction cycle by increasing women’s arousal. That can lead to increased response, heightened stimulation and lubrication, greater sensation, and satisfying sex.

Many women are also relieved by the noninvasive nature of the procedure, which is free of “needles, probes, lasers, numbing creams, freezing, or surgery for zero downtime.”

Cliovana influences sexual satisfaction over the long term. The effects last for around a year, and women can have two treatments annually to renew the benefits.

The process is not a considerable time commitment, either. Each session takes about 10 minutes, and patients receive the treatment four times over two weeks. Many clients experience results right away, and often, these feelings become stronger over the subsequent three months.

While Dr. Pramudji developed Cliovana in her practice in Houston, interested women can work with practitioners around the country to receive the treatment. Doctors from New York to California offer Cliovana, so women don’t have to travel far for the procedure.

Before Cliovana, women may have worried that they would live with diminished sex drives after menopause. But the innovative process revitalizes natural bodily functions, leading some women to levels of sensitivity and enjoyment they didn’t have even before menopause.

“I would absolutely recommend Cliovana to anyone who is looking to amplify their sex life,” one client summed up in an online testimonial.