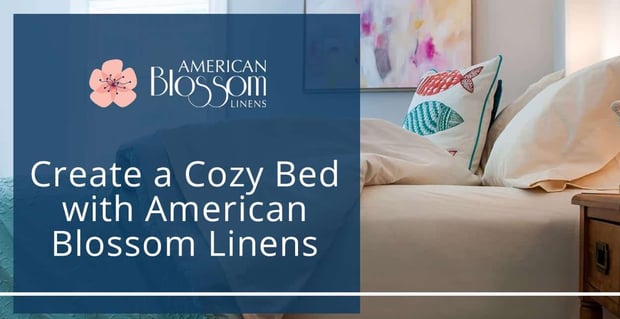 The Short Version: Many couples prefer American-made textiles because they are higher quality and better for the environment than those produced internationally. American Blossom Linens manufactures its sheets, blankets, duvet covers, and other products in the U.S. with organic, sustainable cotton. For couples who want to improve their relationship with a more comfortable night’s sleep, American Blossom Linens products are a luxurious place to start.

When couples are looking for new linens and bedding items that are sustainably and ethically sourced, they often look for American-made products. Textiles made in the U.S. are sought after because of the country’s high manufacturing standards. They are likely to last longer, as well, because imports aren’t always monitored for quality or durability.

They also said they support domestic manufacturing jobs, and transporting goods within the country is more environmentally friendly than having them shipped from overseas.

However, buying domestically produced textiles isn’t as easy as it once was. That’s why American Blossom Linens was founded to provide American-made, sustainable, high-quality sheets and linens to individuals and couples.

American Blossom Linens products are made in the U.S. from organic cotton.

The company has thrived in the textile industry for 90 years, even as many manufacturers have left the United States over the past few decades.

“In the 1980s, almost all the textile production for bedding went overseas. There are few companies making sheets in the United States today,” said Janet Wischnia, Founder of American Blossom Linens.

The limited number of bedding producers in the country makes it even more important for American Blossom Linens to produce its sheets, blankets, and duvet covers for domestic consumers. And that dedication to sustainability is also evident in the way the company treats its employees.

“We give our employees benefits and healthcare for the work they’re doing,” said Janet.

For a company that’s close to a century old, American Blossom Linens still prides itself on innovation. That’s part of what makes the company’s linens such a popular choice for couples.

“These sheets are like a good relationship. The longer you’re together, the better it gets. They aren’t processed with chemicals, so they get softer and softer each time you wash them, just like a great denim shirt,” Janet told us.

Janet’s grandfather started the business in 1931, and it has stayed in the family ever since. Janet has worked there for more than 30 years.

In the 1930s, the company was a small retail store, but Janet’s father and uncles didn’t like retail hours, so they switched to the wholesale market.

In the 2010s, American Blossom Linens purchased a small factory to make bedding. That proved so successful that the company purchased an even bigger one.

“In 2011, we bought one of the plants we’d been working with out of bankruptcy. We were making bedding for hotels, hospitality, and healthcare, not retail,” Janet told us.

The company’s high-quality bedding products were sought after in the B2B market, but Janet had another vision. She noticed that more companies were selling their products online, directly to consumers. She also saw how popular American-made goods had become.

“We sold our products to the fanciest hotels in the business. Now that we didn’t need storefronts, I thought we could sell these products to the general public,” Janet told us.

As it turned out, Janet had the right idea. The company opened its online shop so singles and couples could outfit their beds with linens, sheets, and blankets similar to those used by some of the finest hotels.

Janet is pleased that American Blossom Linens is selling directly to consumers just like her grandfather did.

“We’ve come full circle, and I can take a step back and spend more time with my own grandchildren,” Janet said with a laugh.

A Focus on Environmentally Friendly Linens and Processes

Couples whose relationships are built on a shared love of the environment know they’re getting eco-friendly products when they shop with American Blossom Linens.

The company makes its products from organic cotton sourced in the United States, which reduces its carbon footprint. Other organic cotton manufacturers ship their products from thousands of miles away, which increases the amount of greenhouse gas emissions they generate.

At the same time, the company also pays its organic supplier, along with its team members, more.

“The cost of manufacturing is a bit higher because it’s 100% organic cotton, and it’s a higher-end product. It’s better for you and better for the farmer,” said Janet.

The company currently makes several products, including sheets, pillowcases, duvet covers, blankets, and crib sheets. None of the linens use dyes, so they are available in three colors: natural, white, and latte. The latte is one of the company’s newest products. “Our latte linens are made with cotton that’s a brown color when it grows. It’s an heirloom cotton, and we mix that with the white cotton to create a beige color,” Janet told us.

In addition to a sustainable manufacturing process, American Blossom Linens also preshrinks its products in an eco-friendly way.

Janet Wischnia, Founder of American Blossom Linens, spoke with us about the company’s commitment to quality.

“When you make something in cotton, you want to preshrink it. A lot of companies use chemicals to do that, but we use a machine. We make the sheets a bit bigger to account for the shrinkage and make sure they fit the bed,” Janet told us.

That focus on the environment also bleeds into a passion for making high-quality products. It makes sheets with thicker elastic, stronger seams, and sturdier materials.

“We created the product based on the product for hotels, and we have a two-year happiness guarantee. You can buy the product and return it within two years if you don’t like it,” Janet told us.

People who purchase American Blossom Linens products to upgrade their beds or celebrate relationship milestones typically fall into one of two categories.

The first are those who want to buy products that are made in America. The second type of customer seeks environmentally-sound products. And some people care about both. Fans of American Blossom Linens are also willing to pay a little more for a premium product.

American Blossom Linens: The Perfect Gift for a Welcoming Bed

American Blossom Linens offers luxurious, sustainable products for couples who want to celebrate their relationships with gifts that will make them feel better every day.

Its Herringbone Weave Blanket is another new product, and the company sources the blanket from a Maine-based textile mill that has been making them since 1850.

Up next for American Blossom Linens, the team plans to fill orders for the vast number of individuals and couples in relationships who discovered the company during the pandemic.

“We were shocked when our sales went up 400% last year. Since people were staying at home, everyone wanted to have a nice bed,” Janet said.

The company also conducted a survey to find out what clients were looking for in their bed linen. In response, Janet and her team are looking into making towels and adding more color options for its linens using low-impact dyes.