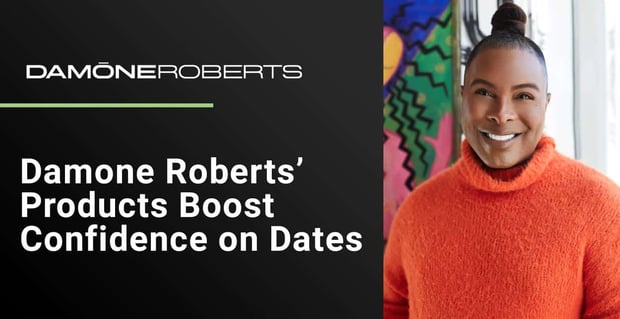 The Short Version: Twenty years ago, makeup artist Damone Roberts realized that a well-shaped brow could do wonders for a woman’s look — and it didn’t take long before the Hollywood elite took notice. He opened a brow salon in Beverly Hills in 2002, and his clients have included A-List stars such as Oprah, Beyonce, Rihanna, Madonna, and Robert Downey Jr. Over the years, Damone has established himself as the Eyebrow King, and his reputation has grown with every magazine shoot, TV appearance, and celebrity red carpet. The Eyebrow King has now brought his star-quality services to the public with an online shop of beauty products and boutique salons that help women (and men!) look amazing and feel confident on dates and in everyday life.

Damone Roberts became known as the Eyebrow King because he rules at sculpting eyebrows to their most beautiful shape.

His passion for brow beauty began over 20 years ago when he was working as a makeup artist for the cosmetic company M.A.C.

Damone Roberts has been nicknamed the Eyebrow King.

“I discovered when I did women’s eyebrows, their faces would instantly transform before we even put on a touch of makeup,” he said. “Women noticed that, too.”

Damone soon brought his eyebrow-shaping talents to Hollywood sets. He worked on the makeup teams at “Melrose Place” and “90210.” The actors heaped praise upon his talent for bringing out their best look — one that wouldn’t wash away when they went home.

Stars began inviting Damone over to their mansions to work on their eyebrows — and maybe the eyebrows of a few close friends. Before long, the Eyebrow King was the centerpiece of private eyebrow shaping parties, and he’d leave with his pockets full of cash.

“I finally realized there was something to this eyebrow thing, and it just kept growing and growing,” he said. “I was able to open an eyebrow salon in 2002.”

When Damone opened his salon, eyebrow sculpting was not nearly as popular as it is today. Most women would pluck or tweeze at home, and they didn’t see the need for an eyebrow artist in the equation. Of course, things have changed drastically since then. Now having eyebrows perfectly done — or on fleek — is a must for modern fashionistas, and it’s even become more common among young image-conscious men.

Damone says his salons currently see over 200 people a day. Some are getting ready for a special event or date night, but most just want to look their best everywhere they go. The Eyebrow King also offers a line of beauty products that helps with eyebrow upkeep without needing an appointment at the salon.

Eyebrows Create an Attractive Frame for the Face

Damone says that the eyebrows are the most underestimated feature on the face, and he’s on a mission to change that. Singles may say they’re attracted to a person’s smile or eyes, but they don’t realize the role that eyebrows play in making someone look great.

“They frame everything, and they can even take 10 pounds off of a person’s face — or 10 years,” he said. “It makes such a difference. Even if you do nothing else, if you get your eyebrows done, then you look fresh.”

A well-shaped eyebrow can transform a person’s face and boost their self-esteem.

He has led the eyebrow revolution and embraced softer and fuller brows over the thin, overly tweezed lines that used to be in vogue.

The eyebrow salons see clients of all types — including men. Many guys don’t want any dramatic shaping, but would like to clean up their brow lines and make themselves more presentable.

“Our company slogan is ‘Every face deserves the perfect frame,’ and I really believe that,” Damone said. “Once you get that perfect frame, you never want to go back. That crosses all types of lines.”

Women of all economic backgrounds visit the salon. A college student could come in for a special occasion and wind up sitting next to a woman who tops the Forbes 500 list. Whether they’re preparing for a first date, a photo shoot, or a wedding, the salon’s clients want to look their best, and they trust the Eyebrow King to make that happen.

In addition to his flagship location in California, Damone has opened a salon on Fifth Avenue in New York City. He also offers one-on-one brow coaching and a boutique experience at the Damone Roberts Beauty Therapy Lounge in Beverly Hills.

By perfecting eyebrow lines, Damone has helped countless clients feel confident and beautiful. The Eyebrow King has been featured on a makeover TV show called “Ten Years Younger,” and he was once the answer to a “Jeopardy!” question.

His reputation has allowed his salon business to grow nationwide, but now he wants to add to his arsenal by creating a line of quality beauty products.

“I created these perfect frames around the world, but I didn’t have the right products to bring out the best features. Eyebrow shaping looks great, but it looks even better with product,” he said.

This esteemed makeup artist went to the lab to see if he could improve the at-home brow shaping experience. He said he wanted pencils that “looked like air,” and colors that didn’t fade on the skin. He wanted his products to last all day, so that busy women wouldn’t have to worry about reapplying.

Damone’s online store has a variety of high-quality makeup — from brow pencils to sensitivity wax — geared toward the eyebrows.

The Damone Roberts Brow Kit is the ultimate wingman for making eyebrows look great before a date night or celebration. The kit includes the customer’s preferred highlighter, pencil, and shadow shades as well as a tweezer and brow scissors. These tools have been backed by experts in the industry. Damone said he created a tweezer that can pull hair from the root and a scissor that is strategically curved to encourage the hair to lay flat.

As a special treat, the beauty line includes an OPI nail lacquer named after Damone. Its memorable pistachio color matches the signature hue of the walls of his salons.

Damone Roberts: Women Feel Their Best No Matter the Occasion

Damone said it’s been rewarding to work with top celebrities throughout his career — but that’s not his favorite part of being the Eyebrow King.

“I love to see women leave my salon,” he said. “I know they’re seeing themselves in a way they didn’t see themselves before, and I love to be a part of that.”

Some women enter the salon with uncertainty, but they leave with their chins held high to show off their new look. Damone calls the moment a person sees their salon-shaped eyebrows for the first time the “Oh my God!” moment because that’s often what clients exclaim when looking at themselves in the mirror.

Damone said he loves that women and men trust him to create a polished frame for their face, and he enjoys it when he receives a heartfelt thanks from his clients. Those who have over-tweezed are especially grateful for his Brow Gain product, which generates new growth for both brows and lashes.

Full and bushy eyebrows have gained popularity in the last few years, and Damone said he hopes this eyebrow moment lasts a long time. Looking ahead, the eyebrow artist has plans to work on television shows and continue expanding his product line to make a difference in how people look at themselves. A trip to the salon or a little at-home sculpting could boost a single person’s self-esteem before a big date.

“If it makes you look better, why wouldn’t you do it?” he said. “Your eyebrows are important, and it’s not about anyone else — it’s about how you feel about yourself.”