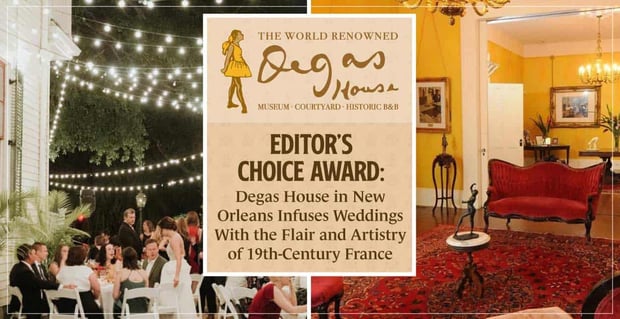 The Short Version: As home to famous Impressionist painter Edgar Degas in the early 1870s, Degas House is one of the most distinctive properties in New Orleans. Today, lovers of French art and history flock to the painstakingly refurbished Degas House for overnight stays and unforgettable weddings. The property has earned the distinction of being one of the few official French landmarks outside of the country and its territories. With its combination of French refinement and New Orleans tradition, Degas House is a wedding venue that leaves a lasting impression on both couples and their guests.

Art-loving couples can learn more about the life of famous French Impressionist painter Edgar Degas in an American city influenced by the country’s culture: New Orleans. The city that’s home to the famous French Quarter district is also home to Degas House, where the painter lived in the early 1870s.

The property has seen its fair share of history in the nearly 150 years since Degas lived there, but it has also been carefully restored to its former glory. Now, it’s a perfect place for art enthusiasts and Francophiles to learn more about the painter — or say “I do.”

The house now hosts plenty of weddings, and a ceremony at Degas House is created just as painstakingly as one of the artist’s beautiful works.

Degas House in New Orleans is an inspiring setting where art-loving couples can get married.

A wedding begins with a Dressing of the Bride event in the hotel’s Estelle Suite, which was home to Estelle Musson, Degas’ cousin. Brides may bring friends, bridesmaids, and family members to help them get ready for the ceremony. The historic room also opens up onto a patio, so they can wave to guests.

“I would put our Estelle Room up against any other room in the city. You feel like you’re in the trees when you’re standing on the balcony,” said David Villarrubia, Founder and Director of Degas House.

As the day progresses, Degas House staff sets up a buffet and champagne for the wedding party. Staff members also keep everything organized, as stylists come to fix the wedding party’s hair and makeup.

Depending on the length of the guest list, couples can decide to have their weddings in one of two double parlors or the salon. After the ceremony, couples often take their first steps as married partners into the stunning courtyard situated between the two Degas House buildings.

“This place was built in 1852 as a residence and a party house, so we have a magnificent courtyard,” David said.

As guests exit the ceremony, they can pick up a drink from one of the bars surrounding the building, and they may dance to music from a brass band that follows the newly married couple down the streets of New Orleans.

Simplifying the Planning for Out-of-Town Couples

In addition to housing the Musson-Degas family in the 1870s, Degas House was a finishing school for girls from 1880 to 1920. Along with its larger event spaces, the house has nine rooms, three of which are larger suites that sleep four to six people.

All of this space provides couples with plenty of options on how they want to set up their weddings.

“The parlors look like 1872 France, but the courtyard is traditional New Orleans,” David said. “Couples can have bands, bars, or even some food out there. For some weddings, we have three bands in the courtyard.”

As such a unique spot, Degas House is a popular wedding destination for both local and international couples. Every year, the property hosts more weddings than there are weeks in a year, averaging around 70 weddings annually. Most of these weddings feature guest lists of between 125 and 300 people.

Couples can host their weddings at Degas House and stay in one of its historic rooms.

“People like getting married where they can stay and spend time with out-of-town family and friends,” David said.

Because so many couples planning to marry are visiting the city, the staff simplifies the wedding planning process. An in-house team helps couples plan their food and beverage service, while the hospitality staff helps book rooms for guests. The venue doesn’t offer in-house music, floral, or photography services, but has a comprehensive list of vendors on hand to recommend.

“We like to be a one-stop shop because we do a lot of destination weddings,” David said. “We help the bride to create her own masterpiece.”

Though Degas (1834-1917) lived most of his life in France, his mother, Celestine Musson, and his grandmother were both born in New Orleans. His mother married a Parisian, but much of her family remained in the United States — in what is now Degas House.

When Edgar was 39, he went through a period of financial trouble, so he came to stay with his American relatives from October 1872 through March 1873. He was prolific during this period, painting 18 canvases, many of which are now on display at the Houston Museum of Fine Arts.

All of the rooms of Degas House are named after members of the Musson-Degas family, including the Mathilde Suite, the William Bell Suite, and the Josephine Room.

When renovating Degas House, David wanted to make sure to depict not only where Degas lived but also where he worked.

Couples enjoy hosting their wedding receptions in the beautiful courtyard between the buildings.

“We’re the only studio where Degas worked that you can visit,” David said. “There’s nowhere else you can go to see where he really painted.”

When guests stay at Degas House, they have the opportunity to learn more about the family’s storied past. Every day, Degas’ great-grand nieces give tours of the home, something they have been doing for more than 14 years.

When David purchased the house in 1993, it was little more than a shell. As a Delta Airlines pilot, he’d regularly traveled to Paris and wanted to bring a little of the City of Lights to New Orleans. It was David’s vision and interest in history that drew him to the property.

Then he brought it back to authentic 1870s life.

He researched how the house would have looked to Degas and transformed the buildings and grounds accordingly.

Degas House is the only place in the world where visitors can experience the places Degas lived and worked, and couples flock to the New Orleans landmark to host their nuptials in the presence of Degas’ greatness. The House was also awarded a New Orleans Golden Hammer Award for Historic Preservation and is on the National Register of Historic Places.

That unique distinction put the site on the world stage, and it recently became one of the only places in the United States labeled as a French landmark.

“There are only four landmarks outside of France and the French territories, and we’re one of them,” David said.

“People connect with Degas. Maybe they connect with him as an artist, or they know art history, or they love ballet. But that connection draws them here.” — David Villarrubia, Founder and Director of Degas House

As part of that status, Degas House will be adding the Degas Arts Center, where visitors can learn about the artist’s life and work. This expansion will be modeled after the institute at the Monet House outside Paris. Further, the Lieutenant Governor wants Degas House to become the French Cultural Center for New Orleans, so the facility plans to build a visitors center, as well.

With all of these changes, David also thinks a bit of a name change is in order.

“We’re going to be rebranding as the World-Renowned Degas House, a French landmark in New Orleans,” he said.

David said he is proud that the house has resonated with so many couples, art enthusiasts, and history lovers from around the world.