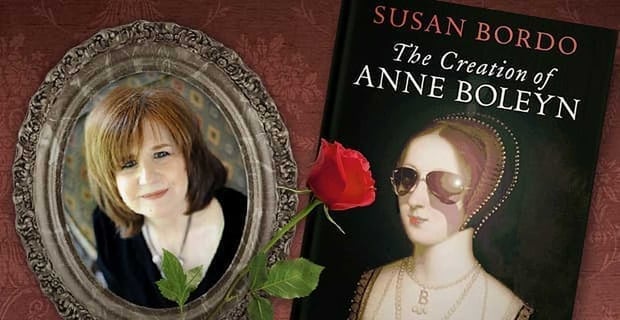 TL;DR: In her best-selling book “The Creation of Anne Boleyn,” Dr. Susan Bordo challenges well-known beliefs about King Henry VIII’s ill-fated second wife and digs deeper into their complex relationship like no other historian, author or filmmaker has done before.

A dark-haired temptress, a blonde martyr, a witch with six fingers, a contemporary heroine, an incestuous schemer and charmer who blinded King Henry VIII – who is the real Anne Boleyn?

For more than 400 years, people have been asking this question, and Dr. Susan Bordo is on a mission to find the correct answer with her engrossing 2013 book “The Creation of Anne Boleyn: A New Look at England’s Most Notorious Queen.”

A mix of history, pop culture and personal experiences, the book calls out some of the common misconceptions made about Anne and attempts to reveal the real woman behind the portraits.

“That’s why the book is called ‘The Creation of Anne Boleyn’, to suggest that there was a real women, and she lived and breathed and died and had a very famous child who went on to be a famous queen,” she said. “All of that’s real, but there’s also this created Anne Boleyn who exists through what historians have said about her and what novelists have done with her.”

A new take on Anne and Henry’s relationship

We’ve all heard the speculation that surrounds Anne’s marriage to Henry and her subsequent execution (Did she steal him from Catherine of Aragon? Was their relationship actually consummated before the wedding? Etc.)

“The Creation of Anne Boleyn” is available on Amazon.

However, Bordo, who holds an interdisciplinary Professorship in Humanities at the University of Kentucky, focuses on theories that are rarely discussed in historians’ books like “Six Wives: The Queens of Henry VIII” or movies like “The Other Boleyn Girl.”

According to Bordo, it wasn’t trickery that made Henry fall for Anne – it was her style, confidence and revolutionary way of thinking.

“I think Henry was ready for something different, and Anne was a new kind of woman for the English court,” she said. “I think intellectually they were a good match. She was an independent thinker.”

So if Henry was so infatuated with Anne, what made him turn on her? That’s the big question Bordo answers in the chapter “How Could Henry Do It?”

While Anne was charged with adultery and treason, most modern historians believe the charges were trumped up and attribute Anne’s downfall to the fact that she hadn’t given Henry a boy and he was courting Jane Seymour.

Bordo, however, attributes her fall to that same independence Henry had originally loved.

“There is still huge, huge interest in Anne Boleyn,

and I’m not sure if it will ever end.”

According to Bordo, Henry was becoming more and more intoxicated with his own authority, and as his intellectual equal, Anne often challenged that authority, which resulted in a coup d’état led by Thomas Cromwell, who served as chief minister to the King.

“I think what finally took it to such an extreme was the fact that the charges Cromwell cooked up against her got at Henry’s sense of what it means to be a man,” she said.

Bordo even makes contemporary comparisons between Henry’s narcissistic personality and those of athletes and celebrities, stating it’s society’s idolization of them that makes them believe they can get away with crimes that ordinary people couldn’t get away with, such as domestic violence.

“If you are treated as though you’re above everyone else, you begin to feel that the ordinary rules don’t apply to you,” she said. “I think that’s a way of understanding Henry, too.”

We may never know everything there is to know about this infamous queen, but Bordo will never stop spreading the word about “Boleyniana,” as she calls it.

“It [Anne Boleyn] will always interest people. If anything, fascination with her has gotten hotter and hotter,” she said. “There is still huge, huge interest in Anne Boleyn, and I’m not sure if it will ever end.”

Dr. Susan Bordo’s book looks at the life of Anne Boleyn in a new light.

And while there will always be new movies, books and TV shows that paint Anne in a false light, Bordo hopes her book will get at the real feeling of who she was, even if that means stepping on a few toes in the process.

“The book goes out on a limb in a lot of ways. It treads on some icons,” she said. “The time was overripe for some criticism of them, and I think I made a few enemies in the process. But you can’t make an omelette without breaking a few eggs.”

Dr. Gail Dines’ “Growing Up in a Pornified Culture”