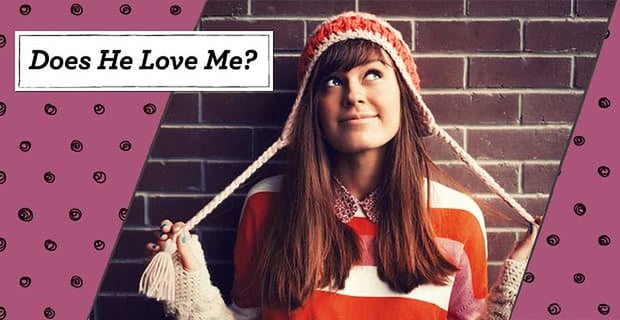 I’m going to teach you some signs that will help you figure out if he’s in love with you and plans on sticking around for the long run. Use the links below to jump to the section that best fits your needs.

First things first, does he love you? Here’s what to look for in his behavior and in what he says:

1. You Say “Doing [XYZ] Will Make Me So Happy” and He Makes it Happen

I have my clients do this all the time. Men hate to be nagged, but men love to be given a road map to your happiness. Tell him something will make you happy, and see if he does it. If you try this, make sure you ask for something small to get this behavior conditioned by appreciating him profusely when he delivers.

2. He Makes Future Plans With You

If he schedules a vacation for several months down the line, asks you go to a wedding way in advance, or begins discussing what it may look like to live together, it means he expects to be with you by the time these plans come to fruition.

3. He Wants to Meet Your Friends and Family

A man who asks to meet your mom or best friend is doing so because he wants to get to know you better.

If he asks you to introduce him to the special people in your life, then he really does care.

He wants to get to know you better because he has either made up his mind about you or is very close to making up his mind and wants to reinforce his decision through positive interactions with your friends and family.

4. He’s Willing to Speak to You Daily

When a guy is playing the field, he may have two to five women he’s speaking to at any given time. If he has that many women, it would be very difficult to speak to all of them every day. However, if he wants to speak to you daily, there is a high probability he is focused on you and got rid of the other women in his life.

5. He Will Do Things With or For You That He Doesn’t Want to Do

As a single person, you listen to yourself and you do whatever is the most fun thing to do in that moment. You have zero or minimal responsibility, and you don’t report to anyone. However, if another has your heart, all of a sudden you’re willing to do things to make your partner happy that may not be your number one priority at the moment.

Now on to the not so pleasant topic. Wondering if you chose the wrong guy? These five signs should make your decisions a little clearer:

6. He Only Texts Once a Week to Set Up a Booty Call

Even if he sends a bunch of texts during your conversation, if he is texting you just to set up a once-per-week meeting, he is doing that to either satisfy a sexual desire or he is lonely and using you until he finds the one.

7. He Says “I’m Not Looking for a Relationship With You”

He is not lying, and you are not going to change him. For whatever reason, he is telling you this because he has put you in the “not a girlfriend” bucket. This does not mean the next girl won’t check the right boxes and be offered an exclusive role. Get out immediately if you want a life partner and don’t want to waste time.

If you say “You will make me the happiest girl on the planet if you would plan a date for us in advance” and he refuses to deliver, then he doesn’t care about you, and he certainly doesn’t love you.

When he won’t initiate the date planning, and all you two do is sit at home, that’s a red flag.

You are not asking for a lot, and you shouldn’t be doing all the work. If you two are always at his place and vice versa and aren’t out there having fun, trying new things together, and being seen by other people, that’s a bad sign.

9. He Refuses to Introduce You to His Friends and Family

Clearly, he will not introduce you to family and friends because he doesn’t expect you to be around long enough to warrant an introduction. It’s time to move on and find someone else.

10. He Won’t Commit to Future Plans

If you invite him to a wedding or want to book a vacation, and he is very hesitant, ask him why. Eventually, you may get out of him that he is not sure whether the two of you will be together by the time of the event.

You Can Also Take a Quiz to Find Out

Another way to tell if a guy loves you is to take a quiz, and there are a ton of them online. While I don’t think you should put all of your faith in these quizzes, they can be fun from time to time. CafeMom and Seventeen are just a few sites that offer a “Does He Love You?” quiz.

Well folks, there you have it. Ten guaranteed signs he does or doesn’t love you. If he loves you, have fun together, show him that you love him, too, and keep the lines of communication open. If he doesn’t love you, get rid of him ASAP because I promise you, there will be someone who does love you. Make room for him! 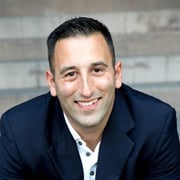 Mike Goldstein is a one-on-one dating coach who helps men and women find love efficiently. He has been featured on "The Today Show," The Star Ledger, Reader's Digest, and Shape Magazine. Over 83% of Mike's clients enter relationships during coaching, and he currently has 100% client satisfaction. He is also an online dating expert who uses the data from multiple major online dating sites to ensure his clients are in the top 5% of successful online daters. FREE Gift: Ebook - "How To Find A High Quality Man In 3 Easy Steps AND The Main Reason You Have Been Choosing The Wrong Men."

Signs a Guy is Into You

If He Turns Down Sex, Is He Still Interested?