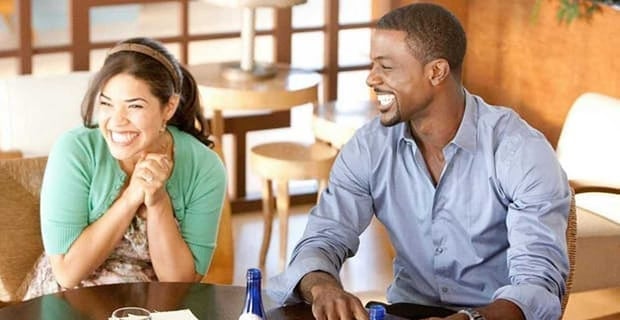 A few years ago, I went on a couple of dates with a guy who was really into me, but I wasn’t that into him.

Then one day I found out he had started dating someone else. As soon as he was no longer available, I became obsessed with him and was kicking myself for missing my chance.

Playing hard to get is one of the oldest and best tricks in the book on how to get someone to want you, and it’s for good reason.

When it comes to dating, it’s not as simple as supply and demand. Being too available conveys neediness, desperation and emotional immaturity (which are turn-offs).

Appearing less available conveys emotional maturity, strength and confidence in knowing what you want and your ability to express yourself.

People flock to a hard to get person because they seem like someone who would be fun to date!

But playing hard to get can be so much more than a technique to get other people to like you. It’s really a fundamental principle for dating success.

While they might look the same on the outside, the person who is playing hard to get is using emotionally manipulative mind games to pretend to be something they are not.

They are pretending to be a confident person when inside they still feel just as lonely and desperate as they always have.

They might be able to fool the other person, but they will still feel miserable about their dating life. As a result, they will likely sabotage any interactions they have with others anyway.

Besides, anytime you attract someone by being someone other than the real you, you’re making a lot of extra work for yourself because now you have to pretend to be that way every time you see them if you want to keep them attracted.

Being hard to get, on the other hand, is about knowing your self-worth, knowing what you want and not settling for anything less.

Being this way will naturally make you less available to most people and make you more attractive as a result (and more importantly, more attractive to the kind of people you actually want to date).

This doesn’t mean you should become some kind of dating snob who looks down on others. It means you are consciously choosing who you want to date and who you don’t.

Many of the clients I’ve coached one on one have, at some point, told me some version of this story:

“I went out last night and flirted with someone, but they weren’t very interested. What did I do wrong?”

My first question is always, “Were you interested in them?”

They almost always say with a shrug, “Eh, not really.”

It’s funny how we can obsess over someone not liking us, even if we don’t really want to date them.

Another word for hard to get is “selective.” The more selective you are in dating from the beginning, the less drama you’ll have to put up with later on down the road.

“Being hard to get is a way

to feel great about yourself .”

With that in mind, let’s look at four of the tried and true playing hard to get techniques and see how you can use them a little differently to develop your confidence and natural dating intelligence, as well as make yourself more attractive to others – in other words, becoming hard to get.

1. Show you can have fun without them.

Part of being hard to get is being comfortable and able to enjoy yourself even if they aren’t around or aren’t interested in talking to/being with/dating you.

For example, if someone you like doesn’t want to dance with you, instead of sitting and pouting about it, go find someone else or dance with friends.

Also, make sure you are seeking people out at events and activities you actually enjoy. It’s very difficult to have fun out at a bar you hate and the only reason you’re there is to hopefully meet someone.

It’s much easier to put your best foot forward if you’re already having fun doing what you’re doing, whether that’s rock climbing, wine tasting or reading at the local coffee shop.

2. Flirt with them…but only a little.

Playing hard to get doesn’t mean you don’t flirt at all. It means you flirt just enough to keep them hooked. Too much pursuing and flirting upfront can make you look desperate.

However, intentionally withholding yourself from expressing genuine interest as a means to appear cool is not sexy. It’s manipulative.

Instead of censoring yourself, don’t let yourself be too excited until you get to know them better.

I could have saved myself a lot of past heartache if I hadn’t been so immediately fascinated by almost everyone who showed the slightest bit of interest in me.

Flirt with a lot of people just a little bit and see which ones you like flirting with the best before getting too attached to any one person.

Which brings me to…

3. Flirt with others in front of them.

Many people feel like they are somehow cheating or being amoral if they flirt with multiple people in the same night – or at the same time!

However, committing to flirting with only one person at a time gives that person too much power to make or break your night. This puts pressure on both of you, and pressure kills sexual attraction.

Unless you and another person have stated out loud to each other that you are in a committed, exclusive relationship with one another, flirting with and dating multiple people is not only perfectly fine, but it’s going to get you much better results.

If someone flirts with you, that doesn’t mean they now own the exclusive rights to flirting with you for the rest of the night.

When I was single, I would flirt with as many as 15 to 20 different men in one night out, most of them for only a minute or two, before figuring out who I wanted to focus more of my attention on.

Because of this, I almost always got at least one first date lined up every time I went out.

Being hard to get does not mean being flaky. It means committing to finding relationships that are really a good fit instead of looking for anyone who’s willing.

4. Don’t return a text or call right away.

If you always pick up the phone when they call or write back instantly when they text, you will appear too available and like you don’t have much going on in your life.

Because of this, one of the essential pieces of playing hard to get is not answering your phone (or text, email and Facebook) right away.

This is a great tip to keep in mind, and instead of doing this to make yourself look like you’re a really busy super cool successful high-in-demand person, use this technique to take a little time to evaluate whether or not you actually want to go out on a date with them.

Sometimes when you meet someone, sparks naturally fly and you get high on all of the delicious brain chemicals that come with sexual excitement.

When this happens, you are literally under the influence of your own emotions and not able to make rational decisions.

It’s a good idea when you “come down” (which is usually after you’ve gone home and gotten a good night’s sleep) to review the interaction in your head and ask yourself, “Did I really get to know them? Was I really attracted to them? Were they really interesting? Are they really what I’m looking for right now? Were there any red flags I ignored in the moment?”

When you’ve determined you do want to see them again, that’s when you can return the phone call and set up your first date.

Are You His Rebound Girl? 4 Ways to Know

The #1 Thing We Need More of in Our Dating Lives