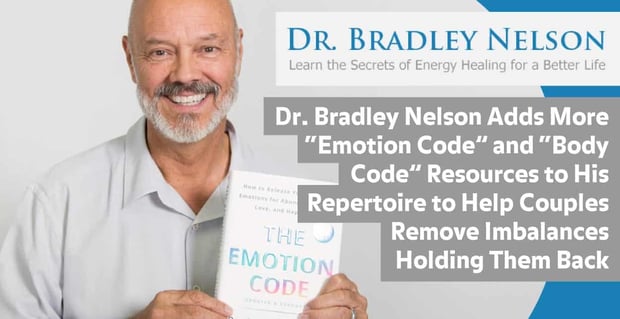 The Short Version: Those experiencing pain, loneliness, or lack of connection in relationships may have an emotional imbalance that’s holding them back. Dr. Bradley Nelson is on a mission to spread awareness about those types of blockages and offer healing solutions. He wrote two books, “The Emotion Code” and “The Body Code,” to give both individuals and trained practitioners tools for dealing with — and eliminating — emotional baggage. Dr. Nelson’s methods can also help couples connect on a deeper level and help singles overcome the romantic barriers that may be keeping them from finding love.

Many people have felt they would never love again after a particularly traumatic relationship experience. Dr. Bradley Nelson suggests that those people may have trapped emotions that can make it difficult to form new romantic connections.

“I believe that these ‘heart walls’ affect us in two ways. First, they block the heart’s energy from flowing through the body. That makes it more difficult for the body to heal itself, and can cause physical symptoms, particularly in the neck, upper back, and shoulders, “ Dr. Nelson wrote in a blog post on the issue. “Second, they block us from fully opening our hearts to others.”

Dr. Nelson shared the story of 38-year-old Miranda, who came to him seeking treatment for neck pain. She also told him she had no interest in dating anymore. Dr. Nelson soon recognized that she had formed a heart wall after a devastating breakup.

Dr. Bradley Nelson believes that emotions trapped in the heart can impact other areas of life, including physical health.

Dr. Nelson used the system he developed to help clear the blocked emotion from Miranda’s heart. According to Dr. Nelson, Miranda returned a few months later and said she’d run into her childhood sweetheart. They immediately struck up a connection — and quickly fell in love.

Miranda told Dr. Nelson that, without his guidance, she never would have been open enough to let a new man into her life.

What’s unique about Dr. Nelson’s system is that those with emotional blockages can either work on their own or with a certified practitioner to clear them.

That’s because Dr. Nelson details the key practices of his system in two books, “The Emotion Code” and “The Body Code.” And he has also recently updated his mobile app for those who want to benefit from his methods on the go.

When Dr. Nelson started developing his program in 2004, he said he never thought it would have the impact it has had.

“Who would have imagined that all this goes on in our bodies? People can get well by doing things they were told they’d never get well from,” he said. “And those who’d searched their entire lives finally found their soul mates. All this from asking the subconscious questions and finding out what was really going on in their hearts.”

Emotional Blockages Can Cause Unevenness in Love

Dr. Nelson was a long-time chiropractor, but he discovered that he couldn’t always help his patients with all of their problems. Sometimes, they had diseases they were told they’d never recover from, including lupus and fibromyalgia. Later, when he became a computer programmer, he recognized that he might be able to tap into the subconscious mind in the same way he could tap into a computer system.

Eventually, Dr. Nelson found that imbalances in the body caused many diseases and behaviors. These could be emotional imbalances his patients had carried around after trauma in their lives or even physical imbalances caused by various impurities in the body.

“All of my experiences led me to find and bring this healing energy into the world. The heart is a second brain, the seat of the soul,” Dr. Nelson notes.

At first, Dr. Nelson shared his method by traveling around the world and performing healing services. He decided to write “The Emotion Code” because he saw how many people were suffering from trapped emotions that made them develop anxiety, depression, or other symptoms. Dr. Nelson’s other book, “The Body Code,” is a companion to his first book and helps people clear other imbalances.

“I believe my practices are really more a matter of remembering than learning. Somewhere, deep inside of you, there could be a holistic energy healer that is about to awaken,” Dr. Nelson said in a story about how his journey began.

After someone clears emotional blockages, Dr. Nelson believes that they can connect with others on a higher level and be open to unconditional love. On a larger scale, if more people feel connected on another plane, they can also overlook their differences and unite.

Dr. Nelson doesn’t take full credit for his practice, either; he describes himself as just a messenger.

“I believe the Earth is in a transformational process right now, trying to bring into reality this new existence where people are living from their hearts,” he said.

Couples May Subconsciously Hold On to Trauma

The emotional baggage that people carry can weigh them down and stop them from reaching their personal, romantic, and professional goals. If they’re feeling regular pain or discomfort in their body, Dr. Nelson suggests that baggage is often the culprit.

However, even if someone doesn’t have an adverse emotional history, they could be carrying the emotional energy of their ancestors.

“The grandchildren of Holocaust survivors have changes in their DNA that are markers for stress and blood pressures. We want to help find and remove these inherited trapped emotions,” Dr. Nelson said.

That’s why his books teach readers techniques that have helped many others overcome barriers and clear emotional baggage.

Readers can learn techniques that tap into their subconscious minds to reveal what’s really going on. From there, they can identify issues that are holding them back or are causing pain. Those issues include trapped emotions, misalignment, pathogens in the body, toxins, or other imbalances.

“People are finding out the Emotion Code is simple and easy to learn. And when they use it, they feel better,” Dr. Nelson told us.

Not only do these imbalances hurt people and hinder their ability to live their lives, but they may also harm a partner, he said. And clearing those blockages can help those who have never found the relationships they desired.

“There’s this invisible energy we put out. When we let down our heart walls, love shows up for us in many cases,” Dr. Nelson said.

Dr. Bradley Nelson: Updates to His Books and App Simplify the Healing Process

Since “The Emotion Code” was first published in 2007, the book has been released in a hardcover edition and has continued to grow in popularity. As of 2019, more than 5,000 Emotion Code-certified practitioners have helped clients around the world.

“We have seen amazing growth, and our work continues to spread throughout the world. The greatest reward comes from sharing this amazing healing knowledge and seeing people learn how to do this themselves,” Dr. Nelson said.

One unique feature of working with a practitioner is that partners don’t need to be in the same room. Instead, they can easily accomplish the blockage-clearing work remotely.

To add to that convenience, Dr. Nelson has updated his app, Discover Healing, for 2020. The app, which users can try for free for seven days, is now more streamlined and offers an intuitive interface and updated content. Further, he said he plans to add new Emotion Code charts and the Body Code mind mapping system.

For those interested in taking their commitment to healing to the next level, Dr. Nelson and his team will also be overhauling Body Code certification for practitioners this year.