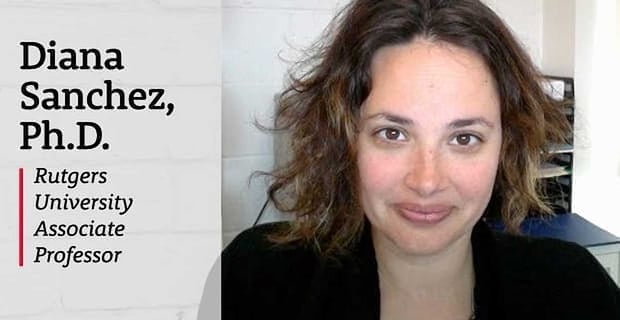 TL;DR: Going on her 10th year at Rutgers University, Dr. Diana Sanchez knows a thing or two about dedication, which comes through in her innovative work that strives to narrow the gender gap between men and women like no one has tried before.

Dr. Diana Sanchez is on a mission, and that mission is a pretty big one.

As an associate professor of psychology at Rutgers University, Sanchez commits her days to addressing the effects gender, appearance and investment have on our psychological well-being, sexual behavior, satisfaction and close relationships.

“A lot of my work shows traditional gender roles are restrictive for both men and women and can have negative repercussions for their intimate relationships, specifically their sexual satisfaction,” she said. “I thought this was another important area of research that needed to be done, so I look at what can explain the sexual differences between men and women.”

We talked more with this go-getter to discuss her most influential research, the impact she’s made and her important goals for the future.

The research that will change our beliefs

Sanchez has contributed to more than 50 publications, but perhaps her most significant research is a series of studies that look at how gender roles determine whether men and women are dominant or passive in a variety of areas, particularly the bedroom.

Her results are shocking.

For one of the studies, more than 300 participants (174 men and 136 women) completed a survey about their relationship status, their beliefs about sex and gender roles, their stance during sexual activities and their satisfaction levels.

This study shows men are more likely than women to initiate sexual activities because of these gender roles, which was related to men reporting more positive sexual experiences than women.

Dr. Diana Sanchez has been an associate professor at Rutgers University for 10 years.

But Sanchez couldn’t stop there. What she really wanted to know was if these attitudes and beliefs happen with or without the participants’ awareness.

For another study, 36 women completed an online word categorization test that instructed them to respond as quickly as possible to a set of letter strings and identify them as words or non-words.

Unbeknownst to the participants, prior to the appearance of those submissive or dominant words, words associated with sex (“naked,” “climax” and “oral”) appeared on the computer screen at a speed outside conscious awareness.

Sanchez found women were faster to respond to submissive words during the task when they had been preceded by these sex-related words, suggesting the activation o f sexual thoughts was cognitively linked to submissiveness.

She also discovered the more women associate sex with submission in their minds, the worse their sexual experiences are and the less likely they are to orgasm, become aroused and be satisfied with their sex lives.

“We found a lot of evidence to suggest there is this prescribed gender role that people have even if they’re unaware of having it,” she said.

Sanchez’s main objective with her work is to teach both men and women to have equitable sexual relationships and to put a stop to repressive acts like slut-shaming.

“I think one way to do that is to have men and women break the gender rules more, where women feel comfortable initiating activity and communicating about what their sexual needs are and providing an open and free space to do that,” she said. “My general goal is that both men and women have general autonomy in their lives and they can express it in their intimate relationships, their friendships, all different domains.”

She’s done so many amazing things already – what’s next?

Sanchez said she will take her research to the next level by looking at how sexual risk-taking behaviors and body image affect sexual autonomy for both men and women, as well as how traditional gender beliefs, in relation to the evolutionary  roles men and women are expected to fulfill, also pose a challenge to heterosexual relationships.

“We’re looking at a number of different belief systems that might make it more difficult for men and women to be authentic with each other,” she said.

So if you’re ready to take on gender norms, read Dr. Diana Sanchez’s research – you just might learn something!

5 Ways GoodTherapy.org Will Find the Right Therapist for Your Love Life