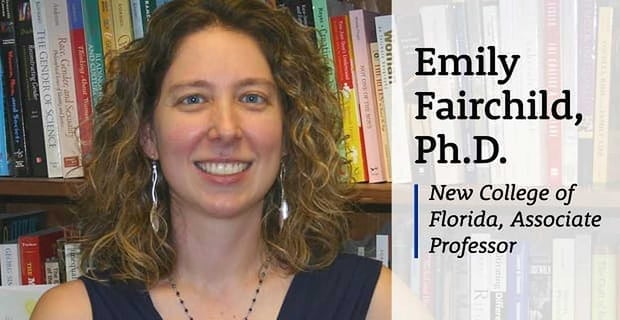 Dr. Emily Fairchild: Examining How Gender Shapes Who We Are

TL;DR: When it comes to understanding how our gender affects our everyday lives, there’s hardly a better person to turn to than Dr. Emily Fairchild, an associate professor of sociology at New College of Florida.

She may be going on her eighth year as a professor of sociology at New College of Florida, but Dr. Emily Fairchild has always been drawn to the subject, particularly the role gender plays.

“I’ve always been concerned with how the world functions, not just as a group of individuals but how we’re connected with one another, and recognizing the importance of social structure — that we don’t just create our lives from scratch but that we’re affected by the people, the organizations and the legal institutions that shape our lives,” she said.

While the topic of gender can be an overwhelmingly broad one, this article will focus on Fairchild’s most influential research to date:

What are “gendered rituals in weddings”?

In her most recent paper, “Examining Wedding Rituals Through a Multidimensional Gender Lens: The Analytic Importance of Attending to (In)consistency,” Fairchild takes a closer look at the behavior of couples as they plan and celebrate this particular occasion, the traditional gendered rituals that take place, such as a woman having her dad walk her down the aisle, and more.

To do so, Fairchild took part in eight different wedding ceremonies, interviewing the bride and groom before and after and several people who had been guests at the ceremony.

The big takeaway Fairchild found through this research is that while people talk about weddings as being individual and they work to personalize the experience, what they might not realize is how much influence their families, friends and guests have.

What is the “feminine/athlete paradox”?

Fairchild’s wedding research is breaking new ground, but what she’s got coming up next is just as exciting.

In her forthcoming paper called “Feminity on the Field,” she uses national survey data that shows how collegiate women athletes across seven different sports want to appear while competing.

While past research shows athletic women aren’t seen as feminine because sports are typically masculine activities, what Fairchild really wants to uncover is the consequences outside expectations have on the bodies of these athletes, including the women becoming apologetic of their physical nature and trying to overcompensate by looking more feminine during competition.

Fairchild has been a sociology professor at New College of Florida for seven years.

Whether it’s a woman wearing a bow in her hair or jewelry around her neck, Fairchild describes these acts as how people “do gender,” particularly in a physical presentation.

“It’s one of the clearest ways we communicate to people whether we’re a man or a woman,” she said. “Even while doing this thing that they are highly skilled at … they still think it’s important to look feminine.”

Fairchild is just scratching the surface on her sports research. The next step is to analyze the pressures these women face from teammates and coaches about how feminine their appearance should be.

And while her research is constantly changing, her goal always remains the same — to bring to light the ways in which gender shapes how people are treated and who has power during different interactions.

“I hope that it makes aware things that we’re not usually aware of,” she said. “Because gender is something that is so ingrained in our daily lives, we don’t often think about it.”

I, for one, know I can’t wait to see what she discovers next.

To learn more about Dr. Emily Fairchild and her impressive work, visit www.ncf.edu/emily-fairchild.