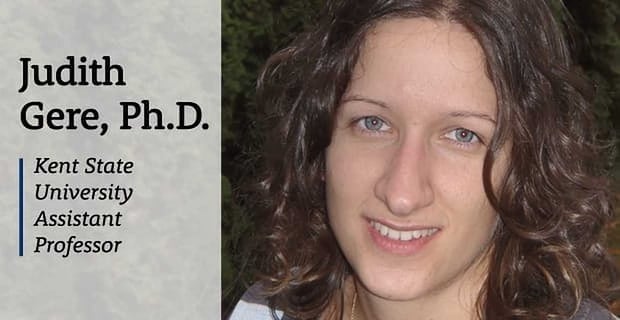 TL;DR: As a fresh face at Kent State University, Assistant Professor Judith Gere, Ph.D., is looking to shake things up with her trail-blazing research about how relationships affect our pursuit of life goals.

While Dr. Judith Gere may only be in her second year at Kent State University, she has spent the last decade of her life studying relationships, and her work has already made a significant impact on the field.

Her primary line of research focuses on how people go after goals within the context of a romantic relationship, whether together or separately, and how those pursuits affect the overall relationship and the well-being of both partners.

Gere is on a mission to find empirical evidence that shows what conflict-resolution strategies work best when couples disagree about their individual and joint goals.

“I was just always interested in how people resolve those kinds of conflicts and what the consequences are of solving those conflicts in different ways,” she said. “Is there a better way to go about it that has better results for the self and the relationship partner?”

Her work at hand

Some of Gere’s most compelling research is her longitudinal studies, which cover the gambit of goal pursuit within relationships, including health effects and the role of self-efficacy.

During one study over an 18-month period, Gere examined 152 arthritis patients and their spouses to determine if patient and spouse confidence in arthritis management goals influenced the well-being and health outcomes of the patient.

“We found that whether the partner believed the patient could effectively manage their arthritis actually had significant effect in the long term,” she said.

One of Gere’s studies focused on patient and spousal confidence in arthritis management goals.

Another longitudinal study she is currently conducting focuses on whether people adjust their personal goals in new relationships and how conflict may arise if those personal goals aren’t congruent. The participants consist of 78 couples who have been together less than four months.

Even just looking at the first two sessions with the participants, Gere saw some surprising results, including partners discontinuing their pursuit of a personal goal.

“The evidence suggests that when people reported that they experienced conflict with their partner when they tried to pursue a particular goal, they were more likely to devalue those goals,” she said.

The next phase in Gere’s work is to examine if initial compatibility and the types of goals make a difference and to what degree partners can accommodate each other that still results in a well-functioning relationship.

“If you’re giving up goals that are basically part of your identity, then that’s probably not going to be a good thing for your overall well-being because you’re sacrificing who you are to accommodate your partner,” she said. “I think it’s important for people to know to what extent they should or shouldn’t accommodate their partner.”

With her past, present and future research, Gere hopes to provide couples with solid evidence that shows them how to effectively manage their goals without having to make sacrifices that prohibit a successful relationship.

“The reason why I do this research is because I do think that it’s applicable to the average person, and I think it is important for people to know scientific evidence for what works and what doesn’t,” she said. “Sometimes people have their own intuitions and their own ideas about what they think works, and that’s not necessarily what the evidence shows.”