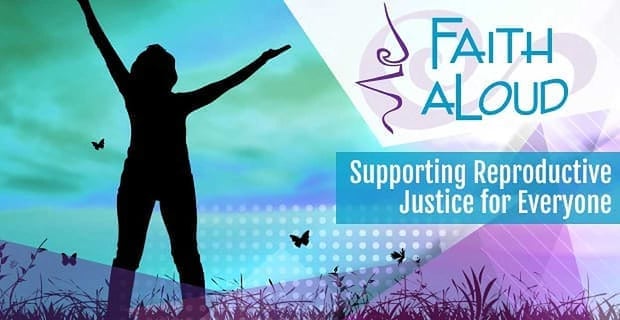 The 411: Faith Aloud strives to create a society where people of all religious beliefs, denominations and practices can make reproductive and parenting choices without fear of judgment.

Abortion can be a difficult subject to talk about, especially among religious communities, and sometimes people are left feeling alone during a time when they need the support of their faith the most.

Faith Aloud is there for those people.

Offering spiritual resources to women in 50 states and more than 14 countries, the organization’s mission is to eliminate religious stigma around abortion and other reproductive decisions.

Seeing that this stigma is often an attempt to control others in vulnerable positions, Faith Aloud works with economic, racial and LGBT justice institutions to have a wider impact on improving conditions for women.

Faith Aloud also provides printed and digital materials to abortion clinics around the world to aid them in their counseling of women.

“We founded Faith Aloud in 2008 because we wanted to be the religious authority that clinics could turn to and that women themselves could turn to for counseling, for spiritual guidance, for resources about religion and abortion,” said Rev. Rebecca Turner, the executive director of Faith Aloud.

Using faith to gain confidence in your decisions

Perhaps the most powerful resource Faith Aloud provides is a series of videos from clergy counselors of different faiths who speak directly to women who are considering abortion and are looking for guidance about how their faith plays a role in their decision.

Faith Aloud also has 36 trained on-call clergy counselors who women can call from any place in the U.S. and during any situation, whether it’s when they first learn that they’re pregnant, right after having an abortion or years after the fact.

Faith Aloud is a group of people of diverse religious beliefs, denominations and practices who strive to eliminate the religious stigma of abortion.

Turner said it makes a world of difference for spiritual women to have a clergy counselor give them words of comfort based around scriptures they know, and sometimes all it takes is someone listening to these women to help them go from feeling distraught to feeling supported in making the choice that is best for them.

“The feedback we’ve gotten over the years has been phenomenal,” she said. “The reason a short video is so powerful is that it’s the religious authority of a real clergy person being compassionate and not judgmental. A woman can listen to someone who speaks the language of her own faith, someone who is helping her to use that faith to gain strength and confidence in her own decisions instead of using religion to judge or harm her in anwy way.”

Faith Aloud is there in times of distress

The main goal of Faith Aloud has always been for women who are facing abortion to know there is a place they can turn to for support, as well as for clinic employees to be prepared with resources to have discussions with women who have religious and spiritual concerns.

“Too often, all women have ever heard are very judgmental religious voices, so they are afraid to reach out to talk to someone about their spirituality,” Turner said. “I really wish that every single abortion clinic in the U.S. was not only aware of our services, but was using our videos in a regular way and referring women to our clergy counselors.”

“We want women to know their faith is available to them in their time of distress.”

In the future, Faith Aloud hopes to have a hotline that women can access at any time and to grow the training program so more clergy counselors know how to respond to women of faith.

“More than anything we want the religious stigma that surrounds abortion in our country to be reduced,” she said. “There is so much hostility about abortion that specifically comes from religious sources and imposes stigma upon women. Everything we do is trying to reduce that stigma. We want women to know their faith is available to them in their time of distress and that God isn’t sitting as judge over them.”

To learn more about Faith Aloud and the positive impact they’re making around the world, visit www.faithaloud.org. Women looking for counseling can also call 888-717-5010.