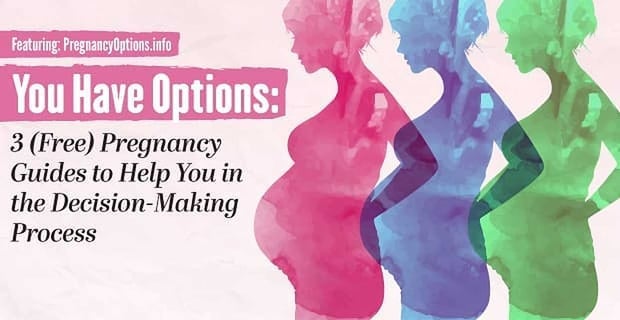 The 411: With three exclusive, comprehensive guides, an impressive resource list and more, PregnancyOptions.info provides accurate information and non-biased advice about everything from childbirth and abortion, to adoption, parenting and coping with the corresponding effects.

When a woman finds out she’s pregnant, normally she’s presented with three options: become a parent, put the baby up for adoption or terminate the pregnancy.

But the process is so much more difficult than just selecting A, B or C, and the folks at PregnancyOptions.info know that, which is why they created three informative and supportive workbooks to let women know they have more options than they think:

“People needed decision-making tools, and they needed perspectives that they weren’t likely to get anywhere else, or not without digging really pretty deep,” said Peg Johnston, founder of PregnancyOptions.info. “We tried to make it a comprehensive thing that answered a lot of questions about parenting, childbirth, abortion, adoption, and then we threw in some aftercare stuff that might come up.”

PregnancyOptions.info published its first guide in 1998, and the material is just as relevant and helpful as ever. Johnston was kind enough to tell us exactly how.

With a team of abortion and adoption care providers, counselors, parenting educators and more behind the wheel, PregnancyOptions.info provides simple yet detailed resources like no one else.

Each handbook, which are available in print and online versions and are at least 50 pages long, consists of a variety of questionnaires, definitions, statistics and personal stories from different perspectives, so no stone is left unturned.

“We wanted to give people as many resources, tools, perspectives as they could have,” Peg Johnston said.

“We tried to understand what people on the ground were asking or were worried about or stuff they may not know or dilemmas that came up, so it was really based on a lot of real-life counseling options with real women and real families,” Johnston said.

And it’s that touch of reality that truly makes a difference.

Another great aspect of PregnancyOptions.info is the work inspires conversations about difficult topics, including one that’s often swept under the rug: a woman who’s ambivalent about her pregnancy.

A Invaluable Resource That Will Never Go Out of Style

PregnancyOptions.info sees more than 10,000 visits each month, but the real impact can be seen in the people who receive assistance. Johnston said she regularly hears from women that the guides have saved their lives, and that means more to her than the amount of hits the site gets.

“I get a lot from around the world. In fact, we just got someone from Italy who wanted to translate the whole thing into Italian. I got a very lengthy letter from a woman in say Denmark about her situation and how much the workbook gave her a chance to make a considered decision in her life,” she said. “I think it has helped individual women for sure.”

PregnancyOptions.info is a project Johnston and her colleagues have dedicated their lives to for more than a decade, and it shows in the results. While most of the actual content will remain the same, Johnston hopes to add more interactive elements and translate the materials into other languages.

Overall PregnancyOptions.info is an incomparable service that will continue to support women in making the best decisions for themselves for years to come.

“I think it remains a really valuable resource for people,” Johnston said.