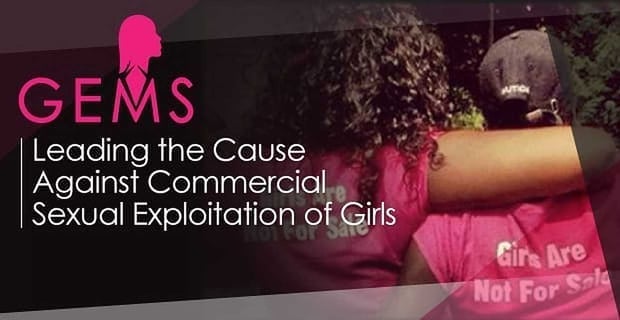 GEMS: Leading the Cause Against Commercial Sexual Exploitation of Girls

The 411: As the only organization in New York State that helps girls and young women who have experienced commercial sexual exploitation and domestic trafficking, GEMS is committed to improving lives, changing public perception and influencing policies that affect sexually exploited youth.

The definition of commercial sexual exploitation is “Sexual activity involving a child in exchange for something of value, or promise thereof, to the child or another person or persons,” but what happens to these children goes beyond what you get from a definition.

Often feeling hopeless, lonely and stuck, girls and young women who are being sexually exploited need somewhere to go when life is at its darkest, and that somewhere is Girls Educational & Mentoring Services (GEMS).

Founded in 1998 by Rachel Lloyd, GEMS offers specialized resources for girls and women aged 12 to 24 who are at risk for commercial sexual exploitation.

Through gender-responsive, trauma-informed, developmentally-grounded, strengths-based, social justice-oriented and culturally-competent programming, GEMS empowers these women to leave the commercial sex industry and live to their full potential.

And what started as a project in Lloyd’s kitchen has now become the largest provider of services specifically for sexually exploited and domestically trafficked youth in the U.S.

We spoke with Jasmine Sudarkasa, GEMS’ development coordinator, to learn more about the support GEMS offers, the impact the organization has made on a local, state and national level, and what you can start doing today to make a difference.

From developing educational initiatives to working with external agencies, the #1 goal of GEMS is to make sure its members receive the assistance they need to make a better life for themselves, whether that’s finding a job, going to college or pursuing a passion that once seemed unattainable.

But perhaps one of the most influential programs at GEMS is the Survivor Leadership Institute and Resource Center, a multimedia platform that creates leadership roles and sustainable economic opportunities for survivors.

This year the big focus of that platform is the the Survivor’s Guide to Leaving, a groundbreaking book for survivors written by survivors that shares stories, tips and ideas to help navigate the challenges during those early months of exiting the sex industry.

“That’s something that we’re particularly proud of,” Sudarkasa said. “It’s what we feel is the extensive book for women who are considering leaving the life or who have already left the life and are interested in connecting with language and materials, because there isn’t that much out there.”

How you can make a difference

Domestic trafficking does not discriminate based on class, race or sex — it can happen to women anywhere and at anytime.

Sudarkasa said the key to ending the cycle is getting people to think more deeply about commercial sexual exploitation and build up communities that are full of leaders who fight for a better world for girls and society in general.

And by taking part in campaigns like A World for Girls, we can all put an end to commercial sexual exploitation of children.

“We encourage people to invest in their communities,” she said. “We often direct people toward Big Brothers Big Sisters of America because there are often a lot of under-served youth who need various things to help them reach their full potential.”

Here’s to another 17 years

For almost two decades, GEMS has been the only organization to do such impressive work on such a massive scale, including working with the legislative process, the judicial system and the criminal justice system in New York State to make sure girls and young women aren’t criminalized for things they shouldn’t be criminalized for.

“We’re trying to engage survivors and allies in the conversation.”

Ultimately GEMS strives to put themselves out of business and end commercial sexual exploitation of children for good, and they hope to do that by expanding their survivor leadership tools, educational initiatives and job readiness programs.

“We have a lot of members who have very successfully transitioned out of the life, and we continue to provide them services. We also continue to see them as part of our family because it’s about a lot more than rescuing young women or helping women ‘escape’. It’s about offering different opportunities to women who were robbed of them from the start,” Sudarkasa said. “We’re trying to engage survivors and allies in the conversation that’s framed and led by survivors.”

To learn more about Girls Educational & Mentoring Services and to join the fight to stop commercial sexual exploitation of children, visit www.gems-girls.org.