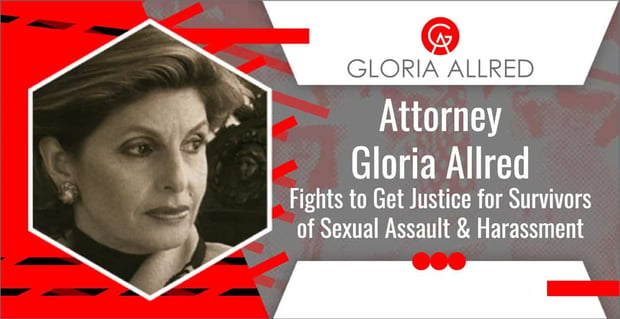 The Short Version: Over the last 40 years, Gloria Allred has made headlines and won awards as a passionate attorney pursuing civil rights and sexual harassment cases in Hollywood and beyond. In the wake of the #MeToo movement, this feminist icon has represented the alleged victims of many high-profile abusers, including Bill Cosby, R. Kelly, and Harvey Weinstein. She challenges the wealthy and powerful on behalf of her clients, and she has won millions of dollars in settlements and favorable court rulings. Anyone confronting an abuser can consult with Gloria’s private law firm to figure out a way forward.

Celebrity attorney Gloria Allred was stone-faced and determined when she appeared in a press conference alongside Latresa Scaff and Rochelle Washington, two women who have accused R. Kelly of sexually assaulting them as teenagers.

Gloria Allred’s clients are among the many women who are accusing R. Kelly of sexual misconduct.

Now these women want justice, and they have trusted Gloria Allred to represent their case against R. Kelly.

“While R. Kelly has rocketed to fame and fortune, he has used his celebrity status to victimize countless young women who were afraid to speak out until now,” Gloria said in a press statement. “To R. Kelly, I am sending this message: You have nowhere to run and nowhere to hide.”

Gloria spoke strongly on behalf of her clients, and she made it clear that she would do everything in her power to see R. Kelly held accountable to the furthest extent of the law.

Throughout her career, Gloria has earned the reputation as a tireless advocate for women and equal rights. She has represented victims of sexual assault and harassment in court and in the media, and she hasn’t hesitated to take on the rich, famous, and powerful in the process. The California attorney has taken aim at well-known actors, politicians, singers, doctors, and CEOs in her pursuit of justice.

“We are seeking justice,” Gloria told us in an interview. “We will do what it takes to win the justice we believe our clients deserve.”

Almost a Lifetime of Advocating for Women’s Rights

In 1976, Gloria partnered with two of her law school classmates to start a law firm called Allred, Maroko & Goldberg. As experts in civil rights, she and her colleagues have been part of many high-profile cases in California and across the country. Gloria specializes in dealing with gender discrimination, sexual assault, and rape, and her bold legal strategy has made headlines over the years.

Gloria’s track record is undeniably impressive and full of big-name cases. She represented Nicole Simpson’s family in the 1994 O.J. Simpson trial. She represented Scary Spice Mel B. in a paternity suit against Eddie Murphy in 2007. She represented Tiger Woods’ mistress in 2010. A Netflix documentary called “Seeing Allred” highlighted her most noteworthy wins in court. Gloria currently represents dozens of the alleged victims of R. Kelly, Bill Cosby, and Harvey Weinstein.

Gloria Allred has added her name to many high-profile cases against sexual abusers.

Allred, Maroko & Goldberg takes on these cases at no cost to the client. The lawyers only get paid if they’re successful in court. “We have always believed that the cost of the wrongdoing should not be borne by the victim,” Gloria said. “It should be borne by the wrongdoer.”

While Gloria’s law firm makes headlines by going after well-known public figures like Anthony Weiner, Allred, Maroko & Goldberg files cases against abusers at all levels of society. These tenacious attorneys have won numerous low-profile cases against employers, church leaders, and ex-husbands, and they encourage anyone with wrongful termination, harassment, or discrimination complaints to reach out and request a free consultation.

The law firm empowers individuals to seek fair compensation, criminal justice, and equality under the law. The team’s victories include confidential settlements and public rulings in civil and criminal courts. In the last five years alone, Allred, Maroko & Goldberg have secured over $100 million for their clients.

“It’s my job to be supportive of our clients. We’re vigorous advocates for them,” Gloria told us.

Gloria accepts clients of all ages, backgrounds, and gender identities. She listens respectfully to their stories and seeks to uphold their rights by any legal means available to her.

The Women’s Hall of Fame Recognizes Her Tremendous Impact

Gloria has earned the reputation as a feminist lawyer through years of tireless advocacy work. Her commitment to equal rights has driven her to take on the powerful on behalf of the powerless. Justice never rests, and neither does Gloria. In 2017, she told The Guardian that she hasn’t taken a vacation since the 1980s, and she has no plans to ever retire from her work.

“I want to help women to win the respect and dignity they so richly deserve,” she said. “I’m blessed and honored to represent them.”

Since 1969, the National Women’s Hall of Fame has recognized many distinguished change-makers.

Over the past 40 years, Gloria has been recognized with many honors and accolades, including the Lifetime Achievement Award from the National Organization for Women (NOW).

In 2019, Gloria will be inducted into the National Women’s Hall of Fame. This honor has been a long time coming, and it recognizes Gloria’s efforts to support women’s rights and move society forward.

Gloria’s impact often goes beyond the courtroom. Her advocacy work changes the way her clients see themselves and tell their stories. She gives victims a podium from which they can speak out and confront their abusers. Whatever the obstacles, Gloria ensures that her clients have a voice and can take the power back from individuals or institutions trying to weaken or threaten them.

“We know there are many battles ahead, but we also know we’re experienced and can fight them,” she told us. “Fighting injustice is very good for the health. I get up every day and look forward to the battles ahead.”

Taking Chauvinism to Court & Speaking Out

In the wake of the #MeToo movement, Gloria has become more vocal than ever in the fight against sexual assault and rape. She said she’s encouraged by all the women telling their stories and seeking justice, but she recognizes that the political climate and legal system can still be stacked against victims of sexual assault.

Even if the statute of limitations has run out on her clients, Gloria continues to find options for them to get satisfaction and confront their abusers in court. She has successfully tried civil cases that seek damages for mental distress and emotional harm. She uses every available avenue to help her clients get closure and receive compensation for their pain.

Despite the challenges before her, Gloria maintains a can-do attitude and firmly believes in the power of individuals to make things right.

“If you care about making change, there is always something you can do,” she said. “Don’t agonize — organize.”

With every court case, Gloria has proven herself a passionate advocate for equality and social justice. Whether she’s taking on a famous rapper or the President of the United States, Gloria argues for the rights and dignity of her clients.

“We want to do everything possible to win justice and accountability,” she said. “We do all this for our daughters, our mothers, our sisters, and our aunts — because that’s what they deserve.”

Gloria Allred Continues to Fight the Good Fight for Everyone

As teenagers, Latresa and Rochelle felt powerless to stand up to a star as big as R. Kelly. They didn’t know how to make themselves heard. Then Gloria Allred came along and helped them take control and put R. Kelly in the hot seat.

Gloria has represented many sexual assault and rape victims in cases against wealthy and influential figures. She doesn’t shy away from the big fights, and she encourages her clients to speak out when their rights or their dignity have been threatened.

For over 40 years, Gloria has made a name for herself as a high-profile feminist lawyer. She has made strong cases against Arnold Schwarzenegger, Tiger Woods, and the Boy Scouts of America, and she has won millions of dollars for victims of sexual assault, rape, harassment, and wrongful termination. Allred, Maroko & Goldberg currently handles more women’s rights cases than any other private firm in the U.S.

“We have to make change happen,” she told us. “No one is going to give it to us.”