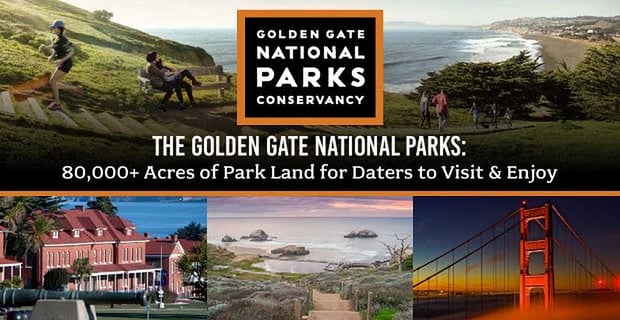 The Short Version: Each year, more than 18 million visitors come to the Bay Area’s national parks to share special moments at rocky beaches, wooded areas, and historical sites. Located in and around San Francisco, the Golden Gate National Parks are among the most visited national parks in the US. Since 1981, the Golden Gate National Parks Conservancy has worked hard to preserve over 80,000 acres of land, which house 19 separate ecosystems and 1,200 historical sites, for future generations. These exceptional destinations give daters a chance to unplug and connect with the environment outside the city. If you want to protect the legacy of beloved national parks, such as Muir Woods, you can volunteer with the Parks Conservancy and spend a day in nature alongside passionate environmentalists like yourself. Anyone can cultivate a romantic moment in the wild by visiting any of the 37 parks under the care of the Golden Gate National Parks Conservancy.

In 2008, my family took a trip to San Francisco over summer break, and the national parks in the Bay Area gave us plenty of things to do and see during our week-long stay. We stared up in awe at the redwoods in Muir Woods and listened with utter fascination to the story of the Alcatraz prison escape.

The parks provided an intimate setting to spend time together. Ensconced in the quiet of the wood, we could leave the bustling city behind and appreciate the outdoors with fresh eyes. From picnicking on a boulder by a river to skipping rocks on the beach (because it was way too cold to go in), I had a wonderful time exploring the rich landscapes of California while never straying too far away from civilization and a good seafood place.

Built in the 1870s, Battery East is now preserved by the Golden Gates National Park Conservancy with restored trails and a new overlook.

The national parks of the Bay Area are a treasure for leisure-seekers because there’s so much to experience on the beach, in the woods, and all along the coast of San Francisco. If you’re looking for a romantic retreat, it’s hard to top 800-year-old trees reaching heights in excess of 250 feet. The secluded spots in these parks offer moments of wonder to over 18 million visitors each year.

Established in 1981, the Golden Gate National Parks Conservancy makes sure San Francisco’s 37 national parks — from Alcatraz to Tomales Bay — remain accessible and beautiful for generations to come. Through public events and volunteerism, the organization invites the community to join its cause and protect the wildlife and plant life abundant in the marshes, beaches, woods, and lands of California.

“People love to get out here and be healthy,” David said. “Our national parks add to the quality of life of visitors and residents. The parks are great places to go on a date or even meet someone new.”

The national parks in the Bay Area are among the most visited parks in the U.S. In fact, according to the website, “more people come to Golden Gate than visit Yosemite, Yellowstone, Grand Canyon, and Glacier National Parks combined.”

Whether on a bus tour at Muir Woods or strolling along the beach at Rocky Point, many visitors find these popular destinations also serve as great spots to take a date. Outdoorsy couples can go hiking or biking along a nature trail (the Conservancy maintains more than 130 miles of trails in total) and soak in the natural landscape of California. There’s plenty to see and do here — taken as a whole, the parks feature over 1,000 types of plants, 250 bird species, and 19 separate ecosystems.

“When I look at San Francisco, I see a city within a national park,” David told us. “What’s unique about the city is you have this dense urban area surrounded by national park lands and other open, green spaces.”

From towering redwoods in the forest to expansive vistas of the bay, the Golden Gate National Parks have a variety of impressive sights to offer adventurous visitors.

The Parks Conservancy promotes the preservation of these beloved parks by inviting people to see the environment in new and engaging ways. Its public events focus on increasing awareness of the beauty and importance of San Francisco’s national parks. Art in the Parks highlights the creative talents of international artists and gives daters a unique space to find inspiration at the intersection of art and nature. The exhibitions range from Lego portraits by Chinest artist Ai Wei Wei on Alcatraz to a 90-foot sculpture in the Presidio, a former military post, by Andy Goldsworthy.

Members of the Conservancy can attend special member events hosted throughout the year. The calendar includes camping trips, trail mixers, and other educational programs in the outdoors.

“Our work has grown organically over the years,” David told us. “The lands we protect are so vast, stretching for about 80,000 acres, spreading 40 miles north and 40 miles south of the Golden Gate Bridge. It mostly hugs the rugged coast of the San Francisco Bay Area and includes all these iconic areas.”

Over 25,000 Volunteers Get Active in the Community

The Parks Conservancy continues a long history of environmental activism dating back to 1907 when Muir Woods National Monument was established. In 1981, the Golden Gate National Parks Association (now Conservancy) was created to watch over the national parks in the area. Its restoration and stewardship projects have been adding to and caring for the natural beauty of the environment ever since.

Today, half a century after the famed Summer of Love, environmentalism and activism in San Francisco is still going strong. Every year, the organization coordinates approximately 25,000 volunteers looking to give back and help the national parks flourish. Volunteering at the national parks is not only an excellent opportunity to do some good — it’s an easy way to meet neighbors with similar interests and passions.

“Our volunteer programs can be a great way to meet someone. It’s a really fun activity interacting with folks in nature,” David said, “and you never know who you’re going to meet.”

If you want to give more than your time to the Conservancy, you can make a tax-deductible donation to support its public programs and conservation projects. By becoming a member, you’ll be eligible for special discounts and gifts, including 15% off on all purchases made at park stores and a free cup of coffee in the Crissy Field Center, Beach Hut, or Warming Hut. The Parks Conservancy is currently supported by 14,000 members who care deeply about conservationism.

According to the Conservancy’s website, “Members help to preserve the Golden Gate National Parks’ ancient redwood forests, historic landmarks, and open spaces that belong to us all.”

The Optimistic Conservation Team Fosters a Love of Nature

A handful of environmentalists founded the Conservancy to raise funds for park projects and environmental education programs. As David said, “It just goes to show that a small group of people can come together to make a difference and change the world.”

The Golden Gate National Parks Conservancy started small, but it didn’t stay small. The organization currently employs more than 400 staff members who share a positive attitude and a passion for the outdoors. The organization rewards innovation and encourages collaboration on a day-to-day basis.

With a lively sense of humor and a shared mission, the team works to build a strong nature-loving community in San Francisco.

They’ve been pretty darn successful at it, too. In 2015, the Conservancy provided $36 million in the form of aid and support to the Golden Gate National Parks and completed 54 restoration projects, which involved growing over 171,000 native plants in their plant nurseries.

“We’re can-do people,” David told us. “People come to work with a smile and really love working on behalf of these national parks.”

Preserving the Iconic Beauty of the Golden Gate National Parks

On the boat to Alcatraz Island, cold sea spray sprinkled over us, and I imagined what it’d be like to swim those frigid waters in the dead of night in search of freedom. Historical sites, like San Francisco’s forlorn prison, offer a glimpse into the past and invite moments of introspection for visitors seeking to connect with America’s roots.

The Parks Conservancy restores historical and natural wonders for visitors to enjoy.

People from around the world come to see the unparalleled beauty of the redwood forests and the iconic engineering of the Golden Gate Bridge. These sites are unique to San Francisco and offer daters a truly memorable afternoon in the great outdoors.

The Golden Gate National Parks Conservancy stewards 37 national parks, including 130 miles of trails and 1,200 historical structures. Its team of staff members and volunteers carefully preserve the natural wonders of the Bay Area for the sake of posterity. Whether you’re pitching in to help this cause or just stopping by to visit a quiet wood, you’re sure to have a fun time in nature at the Golden Gate National Parks.

“It’s really important to keep the national parks in mind as a recreational resource and a community benefit that we should all support,” said David. “There’s always something new to learn or see in the parks.”