How to Introduce Your Children to Your New Boyfriend

Introducing your children to a new boyfriend can be tricky. Is it better to do it sooner or later?

You probably didn’t imagine dating again. After being thrust back into the dating arena, it’s important to remember it’s not like riding a bike.

Things have changed in the years that have passed.

Some people would say it’s become more impersonal, with texting and technology-driven dating. More and more people than ever are online to meet singles.

Not only do you have this new dating world to brave, you also have to do it with your children. As a single mom, one of the most controversial topics is figuring out the right time to introduce your children to your new partner.

Let’s explore this a little more.

It’s fair to say being a single parent sometimes gets you a bad rap when it comes to dating – more so single moms than dads.

There is a stereotypical image that single moms constantly have new guys entering their lives. This “image” is probably born more from the media. Let’s face it – all the neglect and abuse stories get more press.

I’d like to think it really is just a stereotype and move onto the fact most parents who are dating put their children’s needs first. When dating, it can be hard to find a balance between what you need and your kids.

For example, you might have a date and soccer practice scheduled at the same time. Work at the balance and don’t feel guilty. It will all become right in the end.

“It’s important to see how the

kids and your partner interact.”

When to introduce them.

We have parents who have very open and honest relationships with their children. (Maybe this is an age thing?) They don’t want to hide the fact they are dating or have met someone they like from their kids.

Normally parents with the more “open” model will introduce their kids sooner rather than later. More and more people don’t want to waste time dating the wrong person, so it’s important to see how the kids and your partner interact.

On the other hand, we have parents who don’t want any introductions until things get serious.

This is where it’s all about what is “serious” to you. Is it marriage, the words “I love you” or when you are spending more time together and are comfortable?

Everyone has their idea of what serious is and most know when they get there.

We don’t think either option is the wrong one. You know your children better than anyone. Just remember they probably can’t rationalize an adult relationship in the same way you can.

So tell us: When do you introduce your kids to a new date? What process do you use when bringing them together? 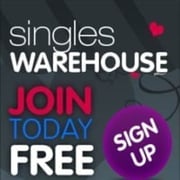 Singles Warehouse is a leading online dating site in the U.S. and U.K. With more than 150 contributing experts, we’re here to help your dating needs. Meet Singles today.