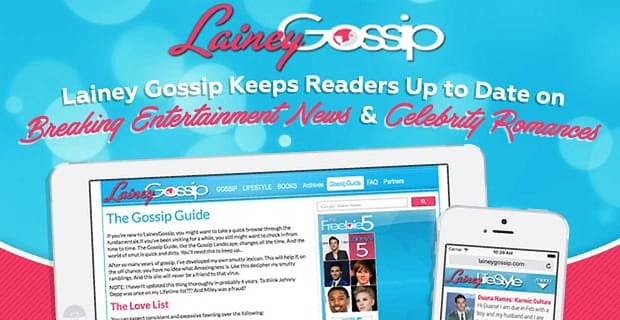 The Short Version: Started in 2003 by Elaine “Lainey” Lui and a small group of friends, Lainey Gossip quickly grew into a bustling web resource where people in the millions turn to find the latest celebrity news. Whether your interest is hookups, breakups, or the new, hot scandal, Lainey Gossip delivers the goods on the Hollywood elite in an entirely unique way. Lainey chooses the gossip and people she wants to talk about with no apologies. In fact, she even has a Smut Index so you can navigate directly to your favorite topics, such as Relationship Assumption and Gorgessity, and get the scoop. Monday through Friday, Lainey serves up the dish on the rich and famous with scintillating editorializing.

Sometimes you need an escape when the dating scene gets to be too much — like the times when you’ve been on 11 first dates in a month and just can’t stand another awkward conversation. Maybe you’re experiencing the push-pull of the relationship status confirmation. Or, maybe you and your significant other aren’t feeling the love right now.

No matter the condition of your affairs, a break from your love life and a dive into the lives of others can be therapeutic, especially when those lives belong to celebrities.

Celebrities give us a look into a life a little less ordinary, but they’re plagued with the same conflicting relationships and emotions as us. Romances are a bit bigger and take place over continents. Breakups are more dramatic and are splashed across newsstands and social media. Speculation is the name of the game when celebrities bob and weave into clubs and cars to evade prying eyes.

The millions of monthly readers who hook up with Lainey Gossip are able to get the scoop on all of it. The hilarious group of columnists at LaineyGossip hang out the dirty laundry of the beautiful people you both love and love to hate. The site’s conversational tenor makes you feel like you’re sipping tea (or something a little stronger) with Lainey and her team as they navigate you through the comings and goings of the big shots in show business.

A Quirky Group of Columnists Team Up to Relay Trending Gossip

The Lainey Gossip team isn’t your run-of-the-mill gossip crew. Rather than boring staff bios, this rambunctious group favors informational headings, like “Things that make me want to cut a bitch” and “Unlikely interests/hobbies,” which gives readers better insight into their brilliant, twisted minds. They are as unique as they are protective of one another.

Lainey, the leader, obviously adores Mariah (it’s her cover pic) and one day wants to play polo alongside “Hot Harry with a Horse.” Sasha prefers babies and toddlers not wearing sunglasses around her and takes a DIY approach to life. Joanna loves her B-list boy band music and counts Lizzy Caplan as one of her imaginary best friends. Readers can catch up on the site’s bios page to see if they have a gossip soulmate in the other columnists: Jacek, Sarah, Duana, Maria, Hayley, or Kathleen.

These skilled bloggers can turn a piece on a macaw-inspired dress into a treatise about the underlying fun factor of high fashion. Lainey’s lunar new year-inspired post about Gwyneth’s big jeans surely had readers cracking up with the command that “we are supposed to avoid conflict right now… so open your mind to these jeans.” No matter how you dice it, this team has no interest in the same old boring headlines.

Not only do they cover fashion pieces, but they also do a run-down of the all the important gossip you may have missed in a section called Smutty Tingles. From award show coverage to the latest breakups, makeups, and hookups, Lainey Gossip delivers celebrity news with a hint of snark and a lot of sass.

Stay on Top of the Latest Rumors, Couplings, Weddings & Breakups

With so much going on in the celebrity universe, it can be hard to keep coupling straight. Gossip hounds need to know if their favorite celebs are friends or on the downlow. When the rich and famous spend time together, they could just be enjoying their luxurious lives with each other, or there may be some love in the air. Confirming celebrity couples is easy for the gang at Lainey Gossip — they have the inside line on who is for real and who is for this weekend.

Always in the know, Lainey was there when Selena and The Weekend made it “Social Media Official.”

A-list celebrity weddings always create a media frenzy of entertainment journalists looking to scoop the dress, the digs, and the I dos. Lainey and crew are on the task of bringing these stories to you five days a week. Readers can get the matrimonial details on their favorite celebs, who may or may not be getting married, and live vicariously through their Italian weddings and Vera Wang originals.

However, celebrity relationships are (sadly) notoriously fickle things. Months apart, wandering eyes, and just old fashioned boredom break up even the most steadfast and committed couples. It was just yesterday Brangelina was the family to be, and now, well, that is a distant memory. But, hey, even celebrities have breakups.

Assumed Relationships Between Celebrities Spending Lots of Time Together

When it comes to getting the dirt on hot new couples, Lainey Gossip’s Relationship Assumption section quickly gets readers up to speed. The blog is always on the forefront of celebrity news like the time they broke the story on Selena’s hookup with The Weeknd.

No one can forget the drop-the-mic moment when J.Lo and Drake’s mutual admiration came oozing out over Instagram. Not only did Lainey Gossip scoop it, but they also made the RiRi connection.

Hookups are inevitable between the Hollywood elite, and Lainey Gossip keeps readers in the know about connecting celebrities. Lainey herself seems to be on top of every new couple out there from the “are they, aren’t they?” of Rooney and Joaquin to the confirmed love match between Nina and Glen.

A rabid Page Six and social media watchdog, Lainey has the edge when it comes to who is seeing who, when, and how long it will last — especially when she tries to figure out the romance between Diego Luna and Suki Waterhouse.

Lainey always seems to be in attendance when celebs prepare to walk down the aisle. The team broke the news that Jesse Plemons and Kirsten Dunst, who play a married couple on “Fargo,” are taking pretend and making it real. Dunst was spied with her ring on in the front row at Ralph & Russo in late January where wedding gowns floated down the catwalk.

Readers wondering if Irina and Bradley are engaged can get the inside scoop from Lainey.

In other engagement news, Bradley Cooper and Irina Shayk are expecting a bundle of joy and a wedding may be in the works as well. The world waits with baited breath for confirmation of an engagement as Irina struts around town in a massive emerald (engagement) ring. Whatever happens with these stories, Lainey is sure to be the first to get the story out.

Sometimes Even the Stars Separate

Nikki Minaj thrilled men around the world with the news that she and Meek Mill had separated. Lainey has a few recommendations of possible matches for the bad girl of rap, which include Jake Gyllenhaal and Michael B. Jordan. Whoever wins the race to ring her up for a date first, it’ll surely be highlighted on Lainey’s front page.

It also seems that Scarlett Johansson is newly liberated from her wedding vows. The separation is as amicable as a conscious uncoupling can be, especially when there is a daughter to co-parent and a newly-opened popcorn business. Lainey cites some lifestyle differences that turned out to irreconcilable to be the cause of the breakup. Don’t cry for Black Widow, though; she’s a tough cookie.

The Gossip Guide Provides a Roadmap to the Lainey Landscape

To make sure her readers get the site’s jargon, Lainey lays out a glossary of sorts in her Gossip Guide. She takes you through her smutty lexicon full of fun words, like gorgessity and Hollywood Ebola. She also lets you know upfront who you will be reading about with hearts in your eyes (Beyoncé and the goopy G. Paltrow) and who she has some serious darts for (Jennifer A. and The Family K).

Full of verve and colorful wordplay, this band of merry tale-tellers deliver celebrity dish a bit different than the rest. Unapologetic and full of spunk, Lainey Gossip doesn’t disappoint when you need a break away from your dating life and want to submerge yourself in some searing celebrity chin-wagging.