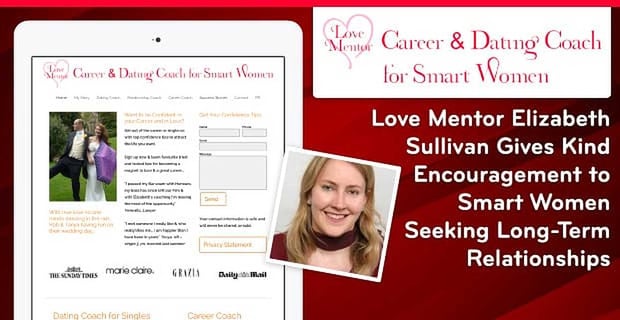 The Short Version: Elizabeth Sullivan, aka the Love Mentor, gets women in the right mindset to attract a serious partner, maintain loving relationships, and succeed in all aspects of life. She offers one-to-one coaching and instructive workshops for anyone seeking level-headed and compassionate mentorship. Her friendly encouragement guides singles and couples toward love and fulfillment. Trained as a clinical hypnotherapist, NLP master practitioner, and dating coach, Elizabeth can quickly ascertain what’s holding her clients back and what they can do to move forward and cultivate happier, healthier relationships.

Mary was 19 years old when she met the love of her life, John Sullivan. They met in 1961 and were married in 1963. Today, they’re still so in love that strangers come up to them to ask them about their relationship. Their daughter Elizabeth knows how rare it is for two people to be so crazy about one another after 50+ years of marriage and feels fortunate to have that example in her life.

“Not many people have seen such a successful relationship firsthand,” she said. “I was lucky enough to witness it in my parents.”

Growing up in Wellington, New Zealand, Elizabeth prioritized education and wanted to be an accountant. However, as an adult, she found it hard to strike a balance between her personal relationships and her career. Her ambitious work ethic took a toll on her love life.

While working in London, she met many similarly successful and driven women who had trouble getting close to men. Some were so strong and independent that men didn’t feel needed or wanted. Some were too shy to show interest in the men they liked, even though they were very confident in other areas of life. Elizabeth believed this disconnect could be corrected, if only smart women had someone to point out their missteps.

Elizabeth Sullivan said becoming the Love Mentor felt natural to her. She had learned the secrets to long-lasting love by watching her parents and wanted to pass those insights on to singles. She started small by giving bits of advice to people she knew. Then, helping a friend reclaim her love life inspired Elizabeth to become a professional dating coach.

Penelope had been with her boyfriend five years and thought the relationship was going nowhere. He’d never seriously committed to a woman before, and she worried that he never would. The 35-year-old single woman turned to Elizabeth for guidance and received words of encouragement and hope. Three weeks later, her boyfriend proposed. Elizabeth went to the wedding and saw Penelope at her highest high.

“It was like a light had turned on inside of her, and she became translucent with happiness,” Elizabeth said. “That really showed me what a difference love can make in people’s lives.”

How to be Lucky in Love by Having the Right Mindset

Elizabeth empowers women to become magnets for love by mentoring them through dating barriers. Because she uses Skype for her one-on-one coaching sessions, Elizabeth has impacted women in countries around the world, including the US, Spain, New Zealand, and the Czech Republic. She has worked with women as young as 24 and as old as 65, but many of her clients tend to be in their late 20s or early 30s — right around the time women start feeling the pressure to settle down and have kids. There are also a large number in their mid-30s and 40s who are very ready to settle down.

Her dating coaching packages offer one 60-minute session or three 20-minute sessions per month over the phone or Skype. In tailored sessions, Elizabeth gives her clients homework assignments and astute dating tips to help them make noticeable progress in a short span of time.

The women who come to Elizabeth tend to be career-driven professionals. They’ve achieved successful careers as lawyers, doctors, teachers, accountants, or other professions and now want to work on their relationships. She identifies common dating issues — getting in relationships that go nowhere, lacking confidence around men, and attracting the wrong type — and outlines simple solutions to get in happy, healthy relationships.

Based on her experiences working with singles, Elizabeth argues against the myth that some people are just lucky in love. She maintains that what singles perceive as “luck” really boils down to mindset and work ethic.

“The lucky people network. They know what they want and persevere,” she said. “They try a lot harder than most people and keep going until they get it right.”

Elizabeth encourages her clients to try new things and approach dating with a positive outlook. “The successful daters aren’t afraid to try something different,” she said. “They educate themselves and change their approach. That’s the difference.”

Even a small change in attitude can have a big impact in a person’s relationships. Elizabeth wants to help people figure out what changes will put them on the path to long-term love. Whether she’s choosing pictures for a dating profile or talking a tired single through online dating burnout, Elizabeth provides a warm and friendly support system for her clients.

“You’d be surprised how quickly it can turn around,” she told us. She pointed to the example of a 33-year-old accountant, whose horribly negative experiences in the dating scene drove her to seek help. Elizabeth worked on building up the woman’s confidence so she would appear more attractive to men. In one week, three guys then asked her out.

“Many women feel discouraged when it’s not working out and they’re feeling rejected,” Elizabeth said. “I help them cope with dating and enjoy it because, when you’re having fun, you click with people faster.”

Long-term, well-rounded happiness is Elizabeth’s dream for her clients. She covers all aspects of their lives in her coaching business. With a nonjudgmental and knowledgeable tone, she coaches clients on how to attract the right relationship as well as how to keep it going throughout the years, like her parents did.

Because Elizabeth made a career change in her life, she knows how impactful such a decision can be toward long-term happiness.

Elizabeth’s mission as a relationship coach is to help commitment-ready couples take the plunge, stuck-in-a-rut couples rekindle the romance, and at-a-crossroads couples decide if they should call it quits or stick it out.

“I was amazed,” wrote Mary, a relationship coaching client. “In one session, she could identify what the key ‘touch points’ were with her exceptional listening skills, perceptiveness, and astuteness.”

Career-oriented clients can seek Elizabeth’s words of wisdom as a career coach as well. She advises conflicted people who want to make a career change, and she supports ambitious employees who want to reach the top of their field without sacrificing their personal lives. Basically, Elizabeth helps people lead fulfilling lives and find happiness in everything they do.

Throughout her career, Elizabeth has collected many success stories from women who benefited from the insights of the workshops, the encouragement of the coaching sessions, and the overall support of the Love Mentor. “I had some amazing and very cathartic sessions with Elizabeth,” wrote Rachel, a client who works in public relations. “She took me on a guided meditation, and I let go of a lot of pain.”

One former client named Tanya was an HR Director skilled at finding the right people for her company, but she was having trouble doing the same for her love life. She went to Elizabeth’s coaching program hoping to get over past hurts and find future love.

“My history was defining my future. I couldn’t move forward,” she said. “But not any longer. Elizabeth helped me look at things that had been holding me back and figure out what I want and how to get it.” Tanya got married in the summer of 2016 and said she hadn’t felt so happy in years.

“I think that my decision to seek Elizabeth’s advice was invaluable,” said Irene, a business owner who completed the three-month program. “Her guidance helped me to find new ways of looking at and forming relationships with men — and also view myself from a different angle with kinder and more forgiving eyes.”

“I recently met a wonderful guy… I feel confident and positive about the journey, and I thank Beth for this new attitude.” — Irene, a Love Mentor client

Irene met her partner and fell in love during her three-month coaching program in May 2013. They moved in together in August 2014. Irene credited Elizabeth for helping her lower her defenses and stop taking a competitive attitude toward men. Her confidence soared, and her love life prospered.

From couples meeting on a train on Valentine’s Day to single mothers finding the right man, Elizabeth has witnessed so many touching stories that she was positively bursting to share them all with us. One woman named Jill said she always dreamed of having a man waltz her around their home, and her now-husband twirled her around the kitchen without her having to prompt him.

Elizabeth said she loves to hear back from clients who have found love and happiness in their lives. She keeps a private tally of the success stories and told us her track record so far is seven marriages, six proposals, and four babies (soon to be six once a client gives birth to her twins). These stories motivate Elizabeth to keep making a difference in the lives of people everywhere. “I have a long ways to go, but I really hope to get to 10,000 weddings one day,” she said.

The Love Mentor: A Compassionate Support System For Singles

Years of watching her happily married parents and learning from their relationship trained Elizabeth to become the Love Mentor for women around the world. In one-on-one coaching sessions and engaging dating workshops, Elizabeth passes on her deep knowledge of the heart to singles in need of guidance.

Today, her friend Penelope is happily married, has two sons, and credits Elizabeth with giving her the push she needed. Sometimes all it takes is someone helping you believe that love is possible for the right person to appear and transform your life. In Elizabeth’s experience, a positive dating attitude is the most valuable asset she can instill in singles looking for love.

“When you enjoy going on dates and feel comfortable, you’ll have success,” she said. “Making the experience fun really is my goal.”