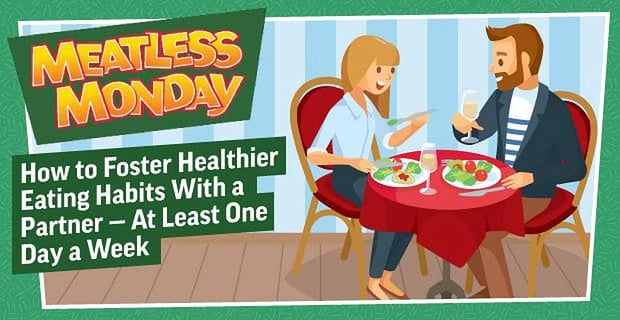 Meatless Monday: How to Foster Healthier Eating Habits With a Partner — At Least One Day a Week

The Short Version: Americans represent a diverse tapestry of ideologies, attitudes, cultures, and belief systems, but one commonality unites us — we are a meat-loving people. Today the average American consumes about 71 pounds of red meat per year, and that’s not a healthy statistic. The overconsumption of meat has serious negative consequences on an individual’s health as well as on the overall environment. To combat these issues, the Meatless Monday campaign encourages people to reduce their consumption of meat by becoming vegetarian one day a week. On Mondays, the people who participate in this worldwide movement cut meat out of all their meals. The campaign’s dietitian recommends a variety of recipes to make mealtimes meatless and delicious. Carnivorous couples can tackle this health project together and have fun cooking up vegetables for a change on Mondays. With ample resources and recipes, Meatless Monday inspires singles and couples to eat more fruits and veggies throughout the week.

The history of Meatless Mondays can be traced back to World War I, when the US Food Administration told families they could aid the war effort by eating less wheat, meat, sugar, and other key staples. The government instituted Meatless Mondays and Wheatless Wednesdays to encourage Americans to switch up their eating habits — and it resonated with over 13 million people nationwide.

In 2003, Sid Lerner, a former ad executive turned philanthropist, revived the idea of Meatless Mondays as a way to advocate for personal health. He suffered from heart disease, and a doctor told him to cut his meat intake by about 15%, which averaged out to a full day’s worth of meals each week. Sid realized cutting out meat for one day a week could be a positive change for many Americans, not just him.

Sid applied his background in advertising to raise awareness about the issues associated with meat consumption. He partnered with Johns Hopkins Bloomberg School of Public Health to establish the Meatless Monday campaign and encourage people all over the world to make small but meaningful changes to their diets — starting one day a week.

Today the Meatless Monday health initiative is active in 44 countries and boasts 150,000 Facebook followers. Many people are drawn to the idea of starting small — not giving up meat entirely — to foster healthier eating habits.

The campaign’s focus on Monday is no accident either; research suggests that a majority of adults see Monday as a day to make a fresh start. On Mondays, people are more receptive to health messages. According to the Meatless Monday site, “Monday can thus be a powerful leverage point in public health promotions to help people stay on track with their health goals.”

Over the years, Meatless Monday has launched other Monday-based campaigns, like Move It Monday and DeStress Monday, to help singles, couples, and families reach various health goals. From physical fitness to sexual health, these initiatives offer resources and community support to hundreds of thousands of people.

Diana Rice, a registered dietitian working for the Meatless Monday campaign, noted the many physical and social benefits of maintaining a balanced diet and eating less meat. You can reduce your risk for heart disease or stroke, curb obesity, cut your weekly budget, lower greenhouse gas emissions, and minimize global water usage simply by partaking in Meatless Mondays.

“We see it as a win-win situation,” she said. “Meatless Monday is a two-pronged campaign to improve the health of individuals as well as the health of the planet.”

Diana believes in the effectiveness of Meatless Mondays but has her work cut out for her when convincing her husband. He was raised in the South and viewed meat as the centerpiece of all meals. Before meeting Diana, he was more likely to scarf down a fast-food hamburger than a fresh kale salad.

When cooking for her husband, Diana endeavors to make traditional meals that are tasty and, secretly, meatless. “I don’t exactly think of it as lying,” she said with a sly smile. “I just put it down on the table and don’t mention I took out the meat.” In this way, she’s gotten her husband to eat and enjoy many vegetable-based foods, including vegetarian lasagna and eggplant parmesan.

You can get healthy and show support for a loved one by participating in Meatless Mondays together.

Many health-conscious couples motivate each other to take up healthier eating habits and hold one another accountable for any cheats. Change starts at home. According to Meatless Monday’s research numbers, 40% of people said it’s easier to achieve their health goals if they join with family, friends, or coworkers.

If you want to join the Meatless Monday campaign with a partner, but don’t know what to make, you can look up vegetarian recipes online. We recommend the following five recipes for daters making veggie-based dinners:

Crunchy Lentil Tacos is a meatless classic. Pre-cooked lentils replace ground beef in the crunchy shell, and the avocado-feta guacamole adds a nice flavorful punch to this dish. You can lay out the ingredients like a taco bar so you and your date can custom make your own tacos with your favorite fixings.

Diana told us this recipe makes it easy to hide meat substitutes — or remove the meat altogether — without sacrificing the taco goodness so many of us know and love. “Tacos are great vegetarian options,” she said. “Generally, if you pile on the cilantro or hot sauce, people are more than happy to dig in.”

Take-out meals may satisfy the taste buds, but they aren’t the healthiest dinner options. However, cooking up some Asian stir fry of your own makes for a fun DIY date night — and you can pack it with vegetables and nutrients. Easy Veggie Lo Mein fills your plate with cabbage, mushrooms, carrots, celery, snow peas, and egg noodles so you won’t even miss the meat. Put it all in a pan and make enough for leftovers. Yum!

“The cooking part should be as fun as the eating part,” Diana told us. “You can open a bottle of wine and make it a fun experience.”

If you and your partner are serious about dieting, you can pulse raw cauliflower in a food processor to turn it into an healthy rice substitute. This will cut out some carbs, but you still end up with a hearty, tasty meal that’s easy to make and easy to enjoy.

I’m obsessed with making my own pizza. It’s so easy and fun to put it all together. Whether rolling out the dough yourself or simply throwing some cheese and toppings on naan bread, you can customize your pizza to your tastes. The best part: pizza is naturally vegetarian. Put some tomatoes, spinach, and squash on there, and you practically have a salad.

You can take these pizza recipes and easily make them your own. Improvisation is encouraged when making pizza! Throw on all the veggies and sauces you like — but maybe go easy on the garlic if you’re making the pizza for a date!

“I make pizza once a week,” Diana told us. “It’s easy to mix it up with different veggies and learn what you like as you go.”

Japanese Onigiri are filled rice balls stuffed with all sorts of tasty veggies. This recipe calls for sweet potatoes and kabocha squash to complement the rice. While the rice is hot, you can shape it into a ball, a triangle, a heart — or whatever you like. When it cools, the rice will hold that form and stay fresh for up to three days in the refrigerator.

The hands-on process to make this dish makes it great for daters who enjoy tackling cooking projects together.

It’s hard to go wrong with pasta. Even without meat, dishes like lasagna provide plenty of food to fill you up. Spring Pea Pesto Penne is delightfully appetizing with tons of nutrient-rich greens and crunchy pine nuts sprinkled throughout. The preparation is quick so it’s ideal for couples who prefer to spend more time eating and less time cooking.

According to the description, “an irresistible pesto made with traditional basil, pine nuts, and grated cheese rounds out the meal.”

Maybe you and your spouse are on the same page about your diet, but it’s a tougher sell getting the kids on board. For families who want to eat healthy together, the Kids Cook Monday campaign serves as a helpful resource. This collection of recipes, toolkits, and advice empowers parents to involve their kids in the meal planning and cooking process at least once a week.

Kids can learn about portion sizes, important nutrients, and taste combinations while cooking with their parents.

By inviting your kids into the kitchen, you can teach them valuable skills. According to Kids Cook Monday, kids who learn to cook often develop a sophisticated palate and feel proud of their culinary accomplishments.

On the website, parents will find guidance on what to cook and how to engage kids of all ages. The Kids Cook Monday campaign even advises what kitchen tasks certain age groups can handle. For instance, children ages 2 to 3 are best equipped to perform simple chores like washing vegetables, kneading dough, and stirring batter.

According to the site, “Most toddlers enjoy helping in the kitchen. They are very tactile and love the concept of eating their art project.”

Getting your kids involved with cooking healthy meals has a positive impact on their eating habits. As Diana noted, “Kids are more likely to eat things they’ve cooked themselves.”

At its core, Meatless Mondays is about individuals making a small sacrifice in service of a good cause. Whether it’s the collective welfare of the country or the personal longevity of a loved one, such long-term goals are achievable if enough people work toward them one day at a time.

The resources provided by Meatless Mondays promote healthier eating habits in people worldwide. A community of health-conscious folks support and motivate one another to stop eating meat, at least once a week. The Meatless Monday campaign gives everyday home cooks realistic plans to getting healthier without making drastic changes to their diets.

You can join this movement by frying up a pan of veggies or throwing together a meat-free pizza every Monday. Plus, going vegetarian with a partner on your Monday date nights is a great way to bond by trying new healthful recipes together.

“Meatless Monday is a way to make a positive contribution to society by choosing to eat less meat,” Diana said. “You can feel confident that your partner is doing it with you and, actually, millions of people around the world.”