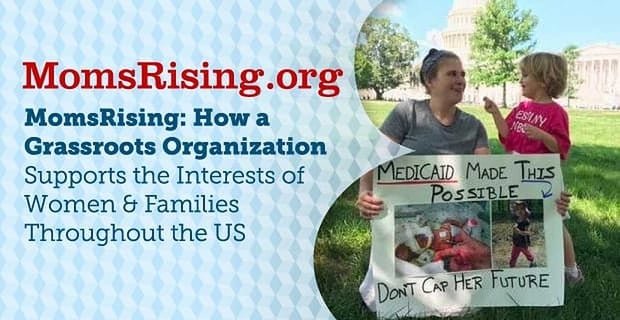 MomsRising: How a Grassroots Organization Supports the Interests of Women & Families Throughout the US

The Short Version: A healthy democracy doesn’t just happen. It requires citizens to stay informed, get involved, and vote to ensure a democratic society can thrive. We, the people, have the power to make change in the US — if only we can come together and make our voices heard. Since 2006, MomsRising has been leading a nationwide movement by engaging everyday families, particularly moms, on the issues that matter most to them. This grassroots organization and media outlet advocates on behalf of parents who face challenges in the workplace, healthcare system, educational system, and other areas of life. As a unifying force for change, MomsRising has mobilized over 1 million members, informed over 5 million readers, and built momentum toward a female-driven future. You can learn how to take action and make a difference on a local, statewide, or national level by working with MomsRising.

We live in turbulent times. The US is facing challenges on a number of fronts, and how we meet these challenges will determine who we are as a people and a country.

Instead of feeling jaded by political rhetoric or overwhelmed by negative headlines, some everyday citizens have rolled up their sleeves and resolved to do whatever they can to create meaningful changes in the country and the world.

MomsRising works to protect women and their loved ones across the United States.

MomsRising is a grassroots organization committed to turning today’s mothers into tomorrow’s leaders. What started with a handful of moms in 2006 has grown by word of mouth into a national movement that has galvanized over 1 million women and men in the US.

Over 10 years ago, MomsRising began as a mission to promote the interests of moms through tireless advocacy work. Today, a team of 40 people collaborate on issue campaigns in all 50 states.

Through its advocacy work, town hall meetings, and calls-to-action, MomsRising empowers women and families to speak out for their rights and pursue equality and justice in all aspects of their lives.

“The fact that our team is strong makes our work so strong. The team is really what makes MomsRising tick,” said Kristin Rowe-Finkbeiner, CEO and Co-Founder of MomsRising. “Our goal is to pass along the baton to other women and to grow an even stronger movement for change.”

You can stand with MomsRising to help make the world a better place for mothers and families. Whether you’re pregnant with your first child or worried for your grandchildren’s future, MomsRising supports your interests across a broad spectrum of policy issues.

“MomsRising is doing incredible work on the ground,” said Calix Vu-Bui in a Facebook review, “to shift policy in a direction that promotes the values and protects the rights of everyday citizens.”

The leaders of MomsRising know that mothers are pretty much superheroes, and they want to channel that strength, passion, and can-do spirit into important political causes. MomsRising is a multifaceted organization tackling complex issues such as paid family leave, health care, child care, gun safety, and maternal justice. You can stay informed and find opportunities to get involved by following the MomsRising blog.

MomsRising spreads the word about important issues of the day through its blog and social media channels, which reach over 5 million people.

“We have moms of all ages. We have grandmoms. We have a significant portion of men as well,” Kristin said. “We like to say anyone with a belly button can be involved.”

In January 2017, the Women’s March on Washington offered an inspirational message of unity and hope to anyone fearing for the welfare of their families and the future of their country. MomsRising has been working hard ever since to keep that momentum going and turn that passion into real, lasting change in policy and government.

Kristin recently released an uplifting book called “Keep Marching: How Every Woman Can Take Action and Change Our World” to outline what everyday women and families can do to make a difference. “This book looks to the future,” said one review, “and is a practical guide on how we can all create a better future together.”

You can pick up a copy of “Keep Marching” for yourself or for a special woman in your life to learn effective mobilizing strategies and tactics from a former political director. All the proceeds from the book will go to MomsRising.

“I’m inspired by all the moms and women out there. I think of MomsRising as a vehicle for change,” Kristin said. “And I’m so happy there are so many people in the vehicle.”

Coming Together as an Influential Force for Change

With the 2018 midterm elections coming up, MomsRising has put significant focus on get-out-the-vote efforts throughout the nation. The organization aims to storm the ballot box November 2018 and make sure parents have a say in the direction of government. The team has organized local meetings and hosted telephone town halls to energize and inform folks. These meetings emphasize the importance of registering to vote — as well as making sure your friends and family are registered — and showing up at the polls.

“I think there are wonderful suggestions about ways to encourage voting and civic engagement,” said one listener.

MomsRising has an impressive track record of accomplishing their goals and making progress toward a mom-driven world. “We’ve had victories across the spectrum,” Kristin said, “from helping to protect the ACA from being overturned to helping people win access to more affordable childcare.”

MomsRising deals with many hot-button issues, including ending mass incarceration, advocating for paid family leave, and supporting fair treatment in immigration policies. The team doesn’t just talk about the issues — they provide avenues for women to take action and make a difference. When the Affordable Care Act was under threat of repeal in 2017, for instance, MomsRising got to work lobbying Congress and encouraging members to call and write to their representatives.

From registering people to vote to promoting gun safety, MomsRising makes an impact on a variety of important issues.

“We don’t live single-issue lives,” Kristin pointed out. “So we cover a lot of policy issues on behalf of all parents.”

When moms get together, they are a force to be reckoned with. These women already know how to get things done, juggle multiple responsibilities, and be phenomenal leaders and role models — now MomsRising is calling on them to bring those strengths into the political sphere.  Since 2006, this grassroots organization has provided a platform where women and families across the country have a chance to be heard and make an impact.

“Thank you, MomsRising, for your tremendous, tremendous leadership.” — Congresswoman Nancy Pelosi, Minority Leader of the US House of Representatives

MomsRising organizes marches and protests, lobbies politicians, publishes information, and empowers moms to push for far-reaching social change. These activists and advocates aren’t daunted by the serious challenges facing this nation because they know they can overcome them by working together and speaking out as one.

“The voices of women are so powerful,” Kristin said. “When we raise our voices — when we vote, call, and come together as a movement — we can move mountains, and I’ve had the privilege of seeing it every day.”