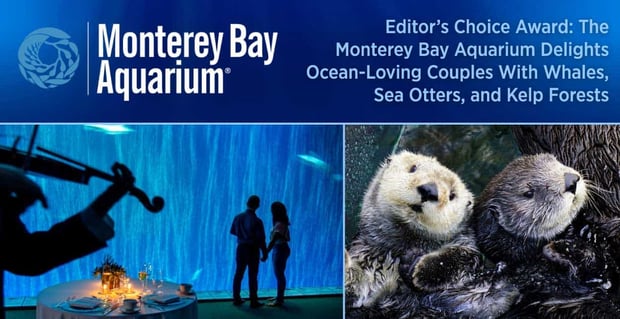 The Short Version: The Monterey Bay Aquarium is a unique place for ocean- and animal-loving couples to experience the marine life native to the Pacific Ocean. The aquarium’s team is committed to making guests’ trips memorable and educational — and often romantic. The facility also hosts exclusive events, including sleepovers at the aquarium and private breakfasts on its ocean-facing patio. For fostering those connections between ocean and animal enthusiasts, the Monterey Bay Aquarium has earned our Editor’s Choice Award.

The Monterey Bay Aquarium in California brings guests up close and personal with marine life, in part, because the ocean crashes up on its doorstep. People who visit the aquarium are often inspired by its faithful representation of undersea life in the Pacific Ocean.

For many couples, a visit here can be a significant experience that cements their bond. And, if both partners are passionate about the aquarium’s conservation mission, they may also find true compatibility in the long run.

“We’ll get letters years later from couples talking about the role the aquarium played in their beginnings. Many people come here because they care deeply about the mission,” said April Browning, Manager of Tour Programs for Guest Experience.

Couples can also take another kind of plunge by organizing a proposal at Monterey Bay Aquarium.

Those who plan to pop the question can collaborate with the team to have a diver swim over and display a personalized sign in one of its exhibits. The team works closely with those visitors on what the sign says, where it’s placed, and how they want the experience to play out.

Monterey Bay Aquarium offers romantic views of the open ocean at its doorstep.

“We love being in on the secret. Over the summer, we had a songwriter from Nashville who proposed to her fiancé, so her sign had a Randy Travis quote on it,” April told us.

So far, each one of those stories has had a happy ending.

“Every proposal has ended in a ‘Yes,’” April said.

Part of the reason those proposals are memorable is that couples find the aquarium so enjoyable.

“People don’t just like the aquarium. They are head over heels in love with it,” said Ken Peterson, Monterey Bay Aquarium’s Senior Communications Strategist.

Bringing the Ocean to the Aquarium

In 1978, a group of marine scientists set out to create an aquarium that represented the sea life of the dynamic Monterey Bay ecosystem. When Monterey Bay Aquarium opened in 1984, it was the first major aquarium to focus on the marine life of its region.

“The founders thought the coolest things would be things people knew less about, like rockfish and invertebrates and kelp forests. And people responded overwhelmingly to these amazing creatures they’d never seen before,” said Ken.

Specifically, guests have always appreciated the location of the aquarium, which is directly off the Pacific Coast. When they visit, many enjoy stepping out onto the aquarium’s back deck, which is in the ocean. There, they can view whales breaching the surface, dolphins swimming by, and otters diving for food.

“It’s spectacular when you step out onto our back deck. That’s our biggest and best exhibit,” Ken told us.

Another popular attraction is the kelp forest. The exhibit is three-stories high and houses a golden kelp forest complete with fish, spotted leopard sharks, and giant sea bass. And the water in the exhibit comes from Monterey Bay. In fact, unlike many other aquariums, it doesn’t use any artificial seawater for any of its exhibits.

The aquarium is also home to a wide variety of rescued animals. The popular sea otter exhibit is home to rescued female sea otters that can’t return to the wild. These otters serve as surrogate mothers to rescued pups and teach them how to live on their own in the wild.

“They enchant visitors. We can also get those pups back in the wild, and we have a measurable outcome on ecosystems that rely on sea otters to stay balanced,” said Ken.

A date at the Monterey Bay Aquarium can be memorable on its own, but it also offers some out-of-the-ordinary experiences.

The aquarium recently hosted its first sleepover for guests 21 and older. More than 300 people brought their sleeping bags and pajamas to the aquarium and woke up with the sea otters.

“People had a blast, and it was wildly successful,” Ken said.

Couples can get engaged at the aquarium with the help of the Monterey Bay team.

The aquarium also offers a popular private breakfast option that allows couples to enjoy breakfast by the open sea or next to the aquarium’s kelp forest. Guests have booked these private breakfasts — paired with hour-long tours — for birthdays, anniversaries, and as part of wedding proposals.

“You’re allowed to be at the aquarium before anyone else, and you and your loved one are alone at the aquarium. We’ve had decades-long members celebrate milestones in front of the open sea,” said April.

Daters can also take in one of the aquarium’s daily programs. Recent programs include “Luna: A Sea Otter’s Story” and “Mysteries of the Deep.” Or they could watch one of the many animal feedings throughout the day.

Couples often decide to make a day — or a weekend — of a trip, and can even book a hotel room with one of the aquarium’s partners to rest after a long day exploring. If they book an aquarium ticket with a participating hotel, too, they receive a two-day admission for the price of a one-day ticket.

The Monterey Bay Aquarium Makes It All Happen Thanks to a Devoted Following of Staff, Volunteers, and Members

Couples have been coming to Monterey Bay Aquarium for decades to connect over their shared love of marine life. Some of those relationships have been taken to the next level with a one-of-a-kind proposal.

The aquarium has recently expanded its presence on social media platforms, including Instagram and YouTube, and it has found a devoted audience of followers from around the world — especially viewers who enjoy watching playful animals as a form of stress relief.

“When they connect with the aquarium online, they feel like they’re already in a relationship with us before they walk through the door,” Ken said.

“We’ve got a huge number of volunteer guides and a staff that understands guests want to have a meaningful time. We want to make people feel welcomed when they come here,” Ken said.

In fact, the aquarium is so beloved that it counts nearly 1,000 volunteers who donate their time to its mission. It also has hundreds of employees who help guests to gain a more significant appreciation for the ocean.

That’s why the aquarium created its well-known Seafood Watch program, which recommends sustainable seafood to businesses and consumers.

“The ocean is a very special place, and we need help from our visitors to ensure it stays safe for future generations,” Ken said.