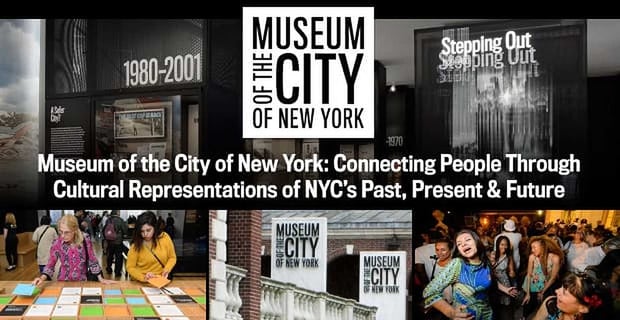 Museum of the City of New York — Connecting People Through Cultural Representations of NYC’s Past, Present & Future

The Short Version: Built with the goal to inspire cultural appreciation, the Museum of the City of New York (MCNY) connects the city’s past, present, and future to educate visitors on New York’s distinctive character. Since 1923, MCNY has been celebrating the city’s diversity and evolution through exhibitions, programs, collections, and publications. Whether you’re looking for a venue for a date or a place to meet other lovers of art and culture, MCNY’s offerings are sure to spark stimulating conversations on history, social awareness, and activism.

There’s no place in the world quite like New York City. The energy, diversity, and mad pace all make it hum with a unique tune. In just a few short centuries, the city transformed from a small Dutch colony into one of the world’s great epicenters of art and culture. New York City has absorbed the passion and heritage from each of its inhabitants. And the history of some of those people is featured in the Museum of the City of New York (MCNY).

NY at its Core, one of MCNY’s many exhibits, is the museum’s way of celebrating New Yorkers who helped shape the city. The exhibit is a series of interactive portraits of 72 New Yorkers whose lives have helped define the city. Social activist and women’s rights pioneer Gloria Steinem said she left the Midwest for New York’s welcoming culture.

“If I stayed home, I had to live like everyone else,” she said. “If I came to New York, I could be myself.”

Like Gloria, many have found New York a place to cultivate individuality and self-assurance. And visitors can hear the stories of Gloria and other luminaries of the city by heading to MCNY.

The museum’s exhibitions and programs show visitors how the city’s heritage has evolved, and helps them connect with other patrons. MCNY presents history in an interactive way and offers a wealth of opportunities to learn about what makes New York City tick.

New York has an undeniable cultural flavor more potent than its often craved-for pizza. The city’s diversity, social conscience, and unbreakable spirit make it a place like nowhere else.

MCNY captures the factors that make New York so unique and allows visitors to track the progress of the city, learn about movements and people, and get inspired to be a part of future history. Offering an ideal starting point, the museum’s exhibitions provide a pointed learning experience and present fellow art, culture, and history lovers a way to share experiences with New York City’s heritage.

The exhibits at MCNY give patrons a glimpse into New York’s rich and diverse heritage.

From Alexander Hamilton to Jay-Z and the everyday New Yorker, MCNY tells the stories of the people who formed the zeitgeist of the city that never sleeps. Through multimedia exhibits that include historic objects, images, video, and photography, visitors enjoy interactive experiences that take them back in time and get them to contemplate New York’s future.

If your date loves historical artifacts and appreciates modern craftsmanship, the New York Silver Then and Now exhibit celebrates silversmithing from the mid-17th through the 20th century. With more than 1,400 works, the exhibit presents a dialogue between the silver designers of the past and present. Visitors will be impressed to see how these craftsmen drew inspiration from widely varied backgrounds to create works of art with an unmistakable New York style.

For something a bit more current and serious, the Activist in New York exhibition explores social activism in New York City from the 17th century through today. The exhibit can spark conversations over the persuasive passion that inspired people to protest throughout the city’s history. Patrons can discuss the museum’s photography collection from the suffrage era and watch audio and visual presentations exploring firsthand accounts of protests. The exhibit is interactive and promotes interplay among visitors.

In addition to curating thought-provoking exhibitions, MCNY also offers a bevy of events that connect the community through topics relating to social activism and cultural awareness. Grab a friend or other socially conscious people and head over to MCNY for its next event.

You can learn about dance cultures and shake your hips at the SABOR & RITMO: International Family Day of Dance. Here, you can boost your skills in salsa, the Puerto Rican bomba, and the Angolan kizomba. This is an event for all ages with several children’s workshops, so it’s a perfect place to share with anyone looking for a little more culture and rhythm in their life. It’s also a preview for the exhibition Rhythm & Power: Salsa in New York.

MCNY is an ideal venue to meet people, and learn about and share the city’s culture.

A leisurely walk in Central Park makes for an ideal precursor to attend the Create a New Central Park event at MCNY. Visitors can take in Frederick Law Olmsted and Calvert Vaux’s plan to preserve New York’s most famous green space. Conversations can then be brought to life by pulling out your drafting pencils to design your own version of Central Park.

New York’s biggest block party, the Museum Mile Festival draws big crowds of museum-friendly New Yorkers. MCNY will be there offering previews of exhibitions and upcoming programs. The festival includes live bands, activities for children, and art in the streets.

Dedicated to Providing Learning Opportunities for the Community

MCNY offers several educational opportunities for educators, students, families, and the community at large. Stop by one or more of these workshops, classes, and events to have a memorable experience with people who also care about the arts and New York City.

Invoke your inner poet at the Ponder a Poem for the City program. Learn about American Master Poet, Walt Whitman, in the interactive Port City, 1609-1898, and read Whitman’s poems about the city itself. After a spell with Whitman’s wistful words, you can compose your own poem and bring it to life with illustrations. Poetry readings offer opportunities to join a few bards and enjoy each other’s work.

In honor of Father’s Day, the museum offers a Father’s Day Card workshop where visitors can learn about a few of New York’s founders. Patrons can experience history with the Father of New York Finance, Alexander Hamilton, and the Father of Greater New York, Andrew Haswell Green. After getting all of this wisdom, you can sit down and make the perfect card for your Pops to let him know, while he may not have fathered a city, he did raise a socially conscious, historically brilliant person in you.

Gloria Steinem came to NYC so she could be herself. And we’re lucky she did. She helped inspire a generation of women to stand up for their rights and became an integral part of New York cultural heritage. Her story, like so many others, is enshrined in MCNY’s halls.

When it comes to New York City, its most valuable treasures are the stories of its people — all its people. And only at MCNY can Alexander Hamilton get the same stage time as Jay-Z. MCNY is proud to promote the type of cultural diversity that makes New York so unique.

MCNY offers New Yorkers and its millions of visitors an opportunity to engage with the past, celebrate the present, and dream about the future with its exhibitions, workshops, and events. Bring a friend or find a new one at your favorite exhibit and add a few new stories to New York’s narrative.