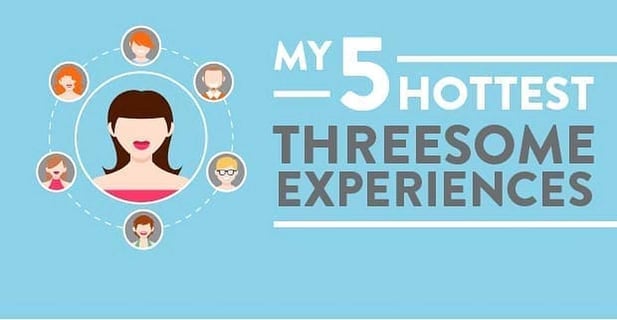 J. and I have had a number of threesomes, both with other men and other women.

I had exceptionally good chemistry with Josh, and J. really liked watching me have sex with him.

Because my chemistry with Josh was so great, and because J. was so turned on by the experience as well, this encounter was pretty explosive.

It made both J. and I realize that when I have sex with another guy I am attracted to, it is a huge turn-on for both of us.

We met Laurel and Jordan on OkCupid, and J. ended up seeing Laurel on his own for a little while in a more casual sexual space. I saw her on my own as well a few times.

Our individual sexual relationships with her meant that when we had threesomes together, we had established ways of communicating and interacting and we were all really comfortable together.

We had a number of threesomes with Laurel, which meant we were able to build up a relationship and the threesomes became more satisfying and fun as we got to know each other’s bodies, needs and desires.

We had a couple of really amazing threesomes in a hot tub and king bed.

Because J. is amazingly open minded and comfortable with himself, and because he knew how hot I thought the idea was, he decided to experiment once with another guy.

We ended up meeting John online. He had explored his bisexuality before and was very comfortable taking things super slow and relaxed with us.

Let me just say this: It was super hot for me to watch J. touch another cock, and it was smokin’ hot to go down on John with J.

While J. identifies as straight and isn’t interested in playing with another guy again, I feel like the luckiest girl on the planet for having such a willing and adventurous partner.

And J. was also able to watch me have sex with another guy, which we both loved a ton.

Recently, I have been dating a woman I am pretty twitterpated with.

I had never had a V-threesome with another woman (all of our previous threesomes with other women have been full threesomes).

In this experience, I found I was able to feel like the center of attention while also getting off on my mental fantasies of J. and Melissa together, as they went down on me together and laid next to each other on the bed naked.

It was really, really hot to be with my long-term partner who I love and a girl I am attracted to, feel close to and who I trust and respect.

Katie B. has a MPH in health promotion and has plans to complete a master's degree in marriage and family therapy. You can read more about Katie B's journey in an open relationship at sexualityreclaimed.com.

Inside the Life of a Swingers Club

If He Turns Down Sex, Is He Still Interested?