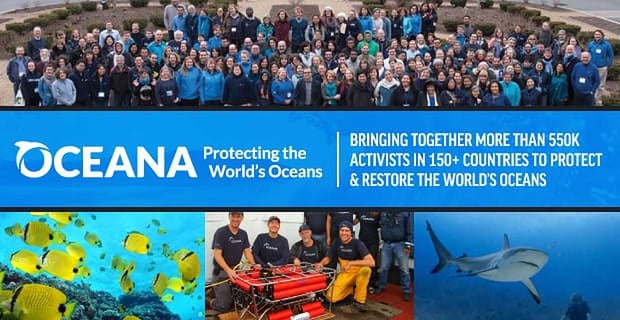 The Short Version: Founded in 2001 to fill the resource gap in ocean conservation and protection, Oceana operates with the virtuous goal to change and enact policy to rehabilitate and preserve the biodiversity of the world’s waters. Oceana’s solutions are pragmatic and campaign-driven, resulting in fact-based, measurable outcomes aimed at saving marine life and habitats. For those passionate about ocean conservation, the nonprofit supports numerous events every year, including Hands Across the Sand and beach cleanups, which are great venues to meet other like-minded coastal activists. With concerned citizens coming together to spread the word about humanity’s impact on the seas and a commitment to influence new environmental-friendly legislation, Oceana is well positioned to continue its mission to help the planet’s oceans thrive.

Roughly 10 years ago, scientists mapped for the first time the total impact humans have had on the world’s oceans, and the results were alarming to say the least. More than 40% of the Earth’s waters have been dramatically affected by overfishing, climate change, and pollution.

Today, researchers have found that nearly two-thirds of the ocean is experiencing increased stress due to temperature anomalies and acidification with man-made origins. These massive ecological changes carry huge negative repercussions for marine life and are even threatening human food security. Thankfully, the nonprofit organization Oceana has been fighting to restore the planet’s oceans to their former glory for well over a decade.

Oceana helps people join forces and fight for policy change that will benefit the world’s oceans.

Through practical, campaign-driven solutions, Oceana is making incremental victories in ocean conservation every day, which are adding up to larger gains for water-based ecosystems worldwide. With an impressive team of scientists, economists, litigators, and advocates, Oceana wades in at ground zero to bring its message of conservation directly to the legislature to enact policy change that will benefit the ocean.

The nonprofit also supports a number of community events that further its mission to spread the word that the oceans are in trouble and how it’s our duty to fix the problem. These events provide coastal activists the ability to get involved and connect with other conservationists who share a passion for protecting marine life and ocean habitats.

After commissioning a study that found less than 0.5% of all spending by nonprofit environmental groups in the US went to ocean advocacy, four foundations came together to create Oceana. In 2001, The Pew Charitable Trusts, Oak Foundation, Marisla Foundation, and the Rockefeller Brothers Fund locked arms to build the organization and centered its goal on protecting and restoring the oceans on an international scale.

Oceana’s mission is all about producing results through pragmatic campaigns, and encouraging environmentally friendly legislation is a big part of this.

“We make policy change in countries that control really important parts of the ocean,” said Alex Armstrong, Oceana’s Senior Communications Manager. “We want to enact change on a national level to help the ocean recover.”

The nonprofit works internationally and domestically to make this goal a reality by focusing its energies on strategic, directed campaigns that produce measurable outcomes. Oceana does this through grassroots organizing and with the help of its in-house team of scientific experts and litigators who work to encourage responsible fishery practices, prevent seafood fraud, reduce illegal and unregulated fishing, and curb the effects of climate change and pollution.

“We’ve won nearly 200 significant victories around the world since 2001,” Alex said, “and we’re continuing to fight for the policies that will help save the oceans.”

Oceana’s campaigns are strategically focused on achieving victories to restore ocean abundance and biodiversity. All campaigns have directed initiatives that are time-bound and aimed at making significant strides in protecting water-based habitats.

While seafood is immensely popular and healthy, Oceana has found some of the fish and shellfish that hit American dinner plates may have origins in ethically questionable business practices. Oceana’s Seafood Fraud: Stopping the Bait and Switch campaign calls for seafood traceability, which helps prevent seafood mislabeling and keeps illegal seafood out of the market. This campaign looks to end the mysterious background of the seafood we eat, aims to keep us healthy, and helps stop illegal fishing.

Another successful campaign, Stop Shipping Pollution, took aim at the cruise industry and wanted it to do something about the up to 25,000 gallons of sewage from toilets and 143,000 gallons of other ship-related sewage cruise ships generate daily. While they dump this sewage three or more miles from the coast, the sewage treatment used by ships was often inadequate and contains tons of bacteria, pathogens, and heavy metals. A year after the campaign was enacted, Royal Caribbean Cruise Lines agreed to install wastewater technology on its entire fleet. This was a huge win for the nonprofit and, more importantly, for the ocean.

Save the Oceans, Feed the World is a campaign that is generating a lot of interest because of its real-world applications. Restoring the ocean could feed one billion people a healthy seafood meal each day. Alex told us about the ways this campaign positively impacts ocean conservation.

“Many of the policies that help restore wild fish populations also help in our fight to protect habitat and biodiversity in our oceans,” Alex said. “This campaign is also a way to address global hunger and climate change because eating wild fish helps move us away from destructive, land-based agriculture. It’s a step in the right direction.”

For those looking to get involved in Oceana’s cause and meet other people who are equally passionate about ocean conservation, the organization supports an array of community-oriented events each year.

Hands Across the Sand is a locally organized program supported by Oceana that offers people a great way to connect with other conservationists. In the last year, 110 groups organized worldwide to protest offshore oil and gas exploration and drilling.

Set up by local communities in association with Oceana, activists also regularly join forces to rid beaches of trash. At just one of these cleanups, a Jacksonville, Florida, group collected 700 pounds of trash and 23,000 cigarette butts. Events, like Hands Across the Sand and beach cleanups, are perfect platforms for like-minded coastal activists to connect with one another and participate in helping save what they care about most.

Another event that both brings people together and is working wonders to help protect the seas is Oceana’s annual SeaChange Summer Party. Tickets are usually tough to come by, but the Orange County event usually brings out California’s stars, so it’s worth a shot to try to attend.

“Our SeaChange Summer Party is one of our biggest events every year,” Alex said. “We celebrated its 10th anniversary this year with special guest Lily Tomlin and Sam Waterston, and it’s raised more than $12 million for ocean conservation to date.”

Oceana’s Next Steps: PSAs & New Legislation to Protect Our Planet

All told, Oceana’s work has protected more than 3.5 million square miles of ocean and all the sea life in it. But, as the stats on climate change, ocean acidification, overfishing, and pollution reveal, there is still much more to do.

Oceana is running PSAs featuring luminaries and ocean conservationists, such as Kate Mara, Lauren Conrad, Joshua Jackson, and others, who urge people to get involved and save the oceans and their sea life. Alex told us the nonprofit is also looking forward to the passage of new legislation that furthers its mission.

“Right now we’re in the midst of a new campaign to ban the shark fin trade in the US,” Alex said. “The demand for shark fins is one of the greatest threats to shark populations worldwide, and it’s estimated that the fins from up to 73 million sharks end up in the global trade every year. Earlier this year, both Houses of Congress introduced the Shark Fin Trade Elimination Act, which would make it illegal to buy and sell shark fin products. It has bipartisan support, so it’ll be very exciting to watch its progress.”

If you are interested in helping Oceana’s cause, it’s possible to make your voice heard and contribute to the organization’s campaigns. And, by attending a nearby event, you might just meet a fellow sea crusader with whom to save the ocean.