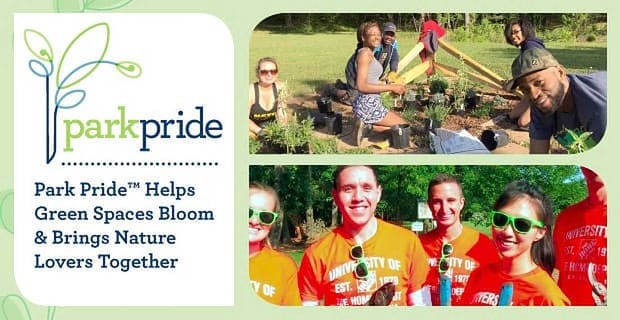 The Short Version: Park Pride was founded in the late 1980s during a nationwide recession to help the city of Atlanta maintain and build green spaces. Through a variety of programs, the organization engages local citizens and businesses to help maintain and improve Atlanta’s parks. The passionate team at Park Pride also hosts events, such as Pints for Parks and volunteering days, to build community and get even more people involved. Moving forward, the nonprofit is focusing efforts on building green spaces that are not only beautiful but that will alleviate flooding in certain areas of Atlanta.

In 1989, the United States was in the midst of a recession, and governments were struggling financially. In Atlanta, city officials weren’t able to devote the necessary resources to keep parks and green spaces in shape. That same year, Park Pride launched to intervene and help address this problem.

“This volunteer group formed and stepped it up to help green spaces flourish during the economic downturn, and they continue to help maintain and create smaller parks throughout the Atlanta metro area,” said Rachel Maher, Park Pride’s Marketing and Communications Manager.

Park Pride started out as a volunteer program that got people out of their houses and into their neighborhoods and parks, providing that extra bit of support to the city, Rachel said. That blossomed into several other programs and services that now help Atlanta’s green spaces continue to flourish. The organization also focuses heavily on advocacy, viewing itself as the voice for parks in Atlanta.

“There are a number of parks conservancies focused on the large parks,” Rachel said. “We’re sort of the conservancy for the smaller parks that don’t have their own conservancy, and we really advocate on behalf of the entire parks system.”

A Variety of Programs to Maintain and Improve Atlanta’s Parks

The early volunteer efforts of Park Pride grew into two of the organization’s flagship programs: Friends of the Park and Volunteer Program.

The former is for neighbors who are interested in making a difference in their local parks. They form a friends group and serve as stewards of the space. The later is for companies and individuals (see Greener Good Volunteer Days below) who are willing to step up and say, “We want to maintain this space and make a difference in our city,” Rachel said.

“Over the years, our programming has continued to evolve,” she continued. Park Pride now also offers a unique Park Visioning Program. The organization has two landscape architects on staff who are devoted to working with communities across Atlanta to help them reimagine and redesign their parks.

In addition to tours, Park Pride offers a ton of ways for citizens to get involved in the community.

The process takes about six to eight months, Rachel said. There’s a steering committee of 10 to 15 dedicated community members and stakeholders who meet with the park visioning team to evaluate the community’s needs, discuss the amenities they’d like to see in the park, and talk about the ways the community would be able to use the park.

“Our landscape architects will create a number of different versions of a park plan that goes to the steering committee and to public meetings to be refined until, finally, there’s one conceptual master plan of a park that the community will adopt,” Rachel said. “Once that plan is adopted, that’s the community and Friends of the Park’s group’s blueprint for future park development. That document is super helpful in fundraising and also in working with the parks departments to show where the community support lies.”

Park Pride offers a grants program as well, which gives matching grants to Friends of the Parks groups throughout the City of Atlanta and DeKalb County. These funds allow the groups to complete park improvement projects — such as obtaining new park benches, building a new playground, adding running or nature trails, building new flowerbeds, or acquiring new land.

Volunteers, like Susanna play a vital role in the work Park Pride is able to accomplish.

Pints for Parks: The Perfect Date for Outdoorsy People

If you’re passionate about the outdoors and beer, Pints for Parks is the perfect place for you to take a date or meet like-minded environmentalists in Atlanta. It’s Park Pride’s biggest and most fun fundraiser and “friendraiser” of the year, Rachel said.

Typically, about 300 park enthusiasts of all ages come out to have fun, enjoy beautiful views of Piedmont Park, play games, eat great food, and drink awesome beer — all while raising money for Atlanta’s parks.

This year’s event is on May 1 at Orpheus Brewing, and the funds will benefit the Park Visioning Department. Rachel told us the department expanded into DeKalb County in 2017, doubling the output of the program.

Park Pride volunteers get to do something good for Atlanta, meet all kinds of different people, and have fun all at the same time.

“This year, we’re shining a light on that program at Pints for Parks to raise money and raise awareness and let people know that program is out there and can and should be utilized by anyone who wants to make a difference in their neighborhood park,” she said.

“Parks provide something for everybody, and there’s a park for as many different kinds of people there are,” she continued. “So anybody and everybody who loves parks or uses parks or has ever been to a park would definitely get something out of these events.”

Pints for Parks is a great way to get involved with Park Pride, but if you want to take it a step further, join the Greener Good Volunteer Days. These volunteer opportunities give you a chance to get your hands dirty while helping Atlanta’s parks.

There’s one Greener Good Volunteer Day on Earth Day, April 21, from 9 a.m. to noon at Hairston Park in DeKalb County. “It’s a great opportunity to come out and join other volunteers and neighbors for a massive effort at a single park,” Rachel said. “There’s a really beautiful trail system throughout the park, so volunteer support is needed to help clear and open some of the trails that have come overgrown.”

Volunteers are also needed to clean up and clear out a forested area next to the playground to help make it a safer and more natural place for kids to play. “It’ll be a really good time for people who want to give back on Earth Day and make a difference and do something good for their city’s green spaces,” Rachel said.

Mary Liz H., a Park Pride volunteer, has this to say about her experience working with the group: “Park Pride has shown me that when you set a goal and gather together a strong team of motivated Atlantans, big change can happen.”

Park Pride: A Passionate Team Dedicated to the Community

Park Pride’s mission is to engage the community to activate the power of parks, and Rachel said a big part of that is the dedicated team behind the organization.

“I don’t think I’ve ever worked with a more passionate staff than the staff here at Park Pride,” she said. “Everyone is 100% all in on what we refer to as the power of parks.”

“We’re really proud of the difference we’ve been making in Atlanta in the last 29 years, and we absolutely love working with and supporting community members.” — Rachel Maher, Park Pride’s Marketing and Communications Manager

“I think we’re really proud of the difference we’ve been making in Atlanta in the last 29 years, and we absolutely love working with and supporting community members in just helping them build their capacity to make their neighborhoods and city a better place to live,” she continued.

Moving forward, one of Park Pride’s key priorities is creating new green spaces to help alleviate flooding in neighborhoods in the watershed of Proctor Creek. Using findings from a study, the organization is developing several of the parks identified in the study that would help with flooding. They’re utilizing green infrastructure, which mimics natural systems to help curb rainwater runoff.

Examples include rain gardens and detention ponds. Park Pride helped open one such park already, and the team is now working on Boone Park West, another park that’s being built to help reduce chronic flooding in Atlanta neighborhoods.

Parks are more than just a pretty space, and that’s something this nonprofit takes a lot of pride in.