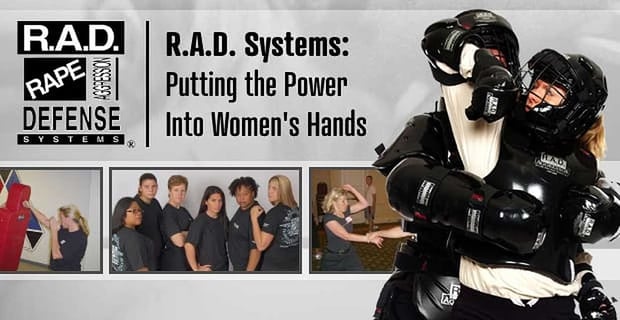 The Short Version: One in five women will be sexually assaulted at some point in their lives, according to the National Sexual Violence Resource Center. While knowing the facts and talking about the issue is an important step in prevention, it’s also vital that women are prepared and know how to defend themselves during an attack. Since 1989, the Rape Aggression Defense System (R.A.D.) has committed itself to doing just that — certifying over 11,000 self-defense instructors and training more than 900,000 women around the world through its educational, comprehensive, and one-of-a-kind classes.

When Casey Wood got accepted into the University of Central Florida, she was excited about the idea of going on a new adventure, being on her own for the first time, and getting to meet all kinds of new people. But her mom and grandma were worried. Not only was she a young woman moving over 215 miles away from her home in Hollywood, Florida, but she had never taken a self-defense course — let alone even had a discussion with anyone about how to protect herself.

After doing some research online, her mother and grandmother found R.A.D., a popular self-defense program that teaches women realistic safety techniques they can easily use during an attack. All three women took the 4-week course together, and it changed their lives, especially Casey’s.

“This class was eye opening for me and helped me be able to go away to college and feel like I’m prepared if something were to happen,” she said. “Not only that, but a large portion of the class is about education and how to stay aware, so that was one of the biggest things I was able to understand that I didn’t understand before.”

Over the next several years, Casey took the R.A.D. class over and over again to improve her skills, so much so that she was asked to be an instructor and then an “instructor trainer.” As a trainer, she even started two R.A.D. programs in the Orlando and Hollywood areas. Casey’s initiative and dedication soon led her to be offered a position at the R.A.D. international headquarters in Louisiana, where she now travels around the country certifying new instructors.

“It’s been a life-changing program for me all around,” she said.

Casey is just one of hundreds of thousands of women who’ve been affected by R.A.D., and she shared with us how the organization got started and the ways it’s become the national standard in self-defense instructor certification.

From the Founder to the Instructors — The R.A.D. Team Strives to Eliminate Violence Everywhere

R.A.D. was created in 1989 by Lawrence N. Nadeau. A former Marine and police officer at Old Dominion University, Lawrence’s mission was to create an easy, educational, and ever-evolving self-defense program run by a group of experienced, dedicated people who could show women how to keep themselves and their families safe — as well as help build a society where violence isn’t tolerated.

R.A.D.’s mission is to create world where women don’t have to fear violence.

And we’re getting closer and closer to that society — in part thanks to the hard work of the R.A.D. team, from the executive board members to the newest instructors. Today, the organization has certified over 11,000 instructors who have trained more than 900,000 women at colleges, law enforcement agencies, and community organizations around the world.

“We want the women to get this information and know how to protect themselves and be more aware, and that starts at the top. The people running R.A.D. have the right mindset and the right goals, and they just want to help our instructors get this program out to the women so it trickles down,” Casey said.

While R.A.D. does have classes specifically for seniors, men, teens, and children that address the issues those groups face in terms of violence, the Basic Physical Defense Program for women is where it all started. Casey said since women are often more likely to be targets for violent crimes, that’s the organization’s main area of focus.

“Even though we’re a large organization and we have so many people out there teaching, the statistics still don’t look very good. The more women we can get this program to, the better,” she said.

This basic one only costs $25, and several courses are even free through a community service organization or law enforcement agency. There are also numerous colleges and universities that offer courses for college credit.

Another perk is that every participant is even given a Lifetime Return and Practice Policy, which means they can take these courses for free as many times as they want for the rest of their lives no matter where they live — as R.A.D. is available in all 50 states and several countries across the world (including Canada, England, and Japan). Check out R.A.D.’s helpful locator to find one near you.

Some R.A.D. courses even include exercises with their exclusive self-defense training suit.

There’s no experience needed to take a R.A.D. class, because a progressive building block format gives everyone the opportunity to learn the skills they want and need to learn — from how to be aware of where they they are and who’s around them to what to do if they’re attacked from behind to using proper form. Numerous classes also include exercises with R.A.D.’s exclusive Aggressor Simulation Training Suit®, the world’s first manufacturer-produced self-defense training suit.

The organization also holds an annual conference offering training and certification in many of their courses — along with general sessions on violence prevention-related topics.

R.A.D. has taken so many details into consideration, which is why it’s the only self-defense program endorsed by the International Association of Campus Law Enforcement Administrators, National Academy of Defense Education, the National Self- Defense Institute, and Redman Training Gear. They’re bringing together a variety of people from different corners of the community and different walks of life for a truly important cause.

Whether it’s teaching baby steps or lifestyle changes, R.A.D. covers the spectrum and puts as much power into women’s hands as possible — with the ultimate purpose to have every single woman take a program (or multiple) and never have to fear violence again.

“That’s a high goal, but getting the program out to as many people as possible is what we’re trying to do here,” Casey said. “You can’t control the people who are committing these crimes, but if you can control how in tune you are to your surroundings, it may decrease the chance of becoming a target in the first place. If we can get the women educated, even just being more aware, then they’re going to be that much better off in the future.”