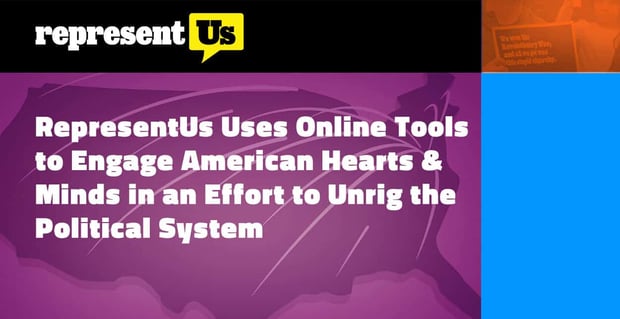 The Short Version: At a crucial time in American history, RepresentUs has fostered hope, unity, and progress by pioneering digital advocacy campaigns in support of voter rights. The RepresentUs team rallies support behind anti-corruption laws that make elections fairer and voting easier for the American people, particularly women and other marginalized groups. The U.S. faces significant challenges in the 2020 elections, and RepresentUs is committed to helping institute vote-by-mail policies so that singles, couples, and families don’t have to choose between their vote and their health.

The 2020 COVID-19 pandemic has disrupted the American way of life in a lot of ways. From the wedding industry to the restaurant business, people have had to adapt to the new normal of social distancing, and some political advocacy groups have been quick to seize the moment and fight for the rights of everyday Americans in this presidential election year.

In 2020, RepresentUs shifted its focus from in-person rallies and became a leader in digital campaigning.

RepresentUs is a nonprofit organization that focuses on the issues that unite, empower, and inspire the American people. This group pushes for policy reforms that will eradicate corruption and uphold the will of the people in the ballot box.

Not even a pandemic can slow down the RepresentUs team, which has ramped up its online efforts to advocate for reforms on a local and national level. Within the last few months, RepresentUs has expanded its online presence, digital events, and interactive tools to continually engage people on the issues impacting politics and government today, including women’s rights and LGBTQ equality.

Ellen Moorhouse, the Deputy Communications Director for RepresentUs, recognized that 2020 offers some challenges when it comes to grassroots organizing, but she said that RepresentUs is already exploring more creative, technological, and forward-thinking avenues to raise awareness about corruption in politics and represent the interests of the American public in the ongoing fight against corruption.

“RepresentUs is laser-focused on the nonpartisan policy issues that impact everyday Americans,” Ellen told us. “Our focus is on a state-by-state strategy that unrigs the system and puts the power back in the hands of the people, not just special interests.”

Grassroots Organizers Push for Vote by Mail Across the Country

U.S. health officials have confirmed that the coronavirus will still be around in the fall, and that has naturally raised concerns regarding the presidential race. Campaigns must figure out how to reach voters without endangering the public, and election officials have to prepare for a new way of voting with social distancing measures in place.

States with a robust vote-by-mail system are in good shape to have safe and fair elections in November. However, seven states in the U.S. do not have a universal vote-by-mail policy in place (voters need to provide an excuse to get an absentee ballot) and have not taken action to correct, amend, or expand their vote-by-mail capabilities in light of the pandemic.

RepresentUs has raised awareness about how vote-by-mail policies differ from state to state.

RepresentUs has called out the Stalling Seven and demanded that Congress provide the funding necessary to expand vote-by-mail measures in all 50 states.

“Five states in this country have already figured out how to vote by mail, and they have some of the highest turnout numbers in the country,” Ellen told us. “We argue that American officials need to look at those successful models to understand how to safely expand vote by mail.”

RepresentUs has created an interactive map to give Americans a state-by-state look at the vote-by-mail policies in place. Voters can also use this tool to request an absentee ballot in their state and learn more about the specific laws impacting them.

The issue of voting by mail has become central to RepresentUs advocacy work. Its volunteers have made more than 7,500 calls to state and federal officials to ask for safe vote-by-mail options for the 2020 presidential election, and they have also texted more than 44,000 voters to make them aware of this pressing issue.

A RepresentUS petition calls on U.S. senators to implement nationwide vote-by-mail legislation and has gotten over 27,000 signatures so far. The website even has an online tool to help voters reach their senators via Twitter and urge them to support voting by mail.

“Our big focus going forward has to be on vote by mail,” Ellen told us. “We see the need for it. The only question is: Do we have enough money and political will to make this happen before the presidential election in November?”

The spring and summer of an election year typically sees the RepresentUs team taking to the streets and knocking on doors to raise awareness about the issues and get out the vote. However, 2020 has necessitated a change in the nonprofit group’s campaigning tactics.

A dedicated and passionate team fights corruption in politics through many different campaigns.

RepresentUs is a grassroots organization fighting against corruption, so its focus is on inspiring American citizens to contact local officials, petition the national government, and take action to see that lawmakers do the right thing.

Although door-to-door canvassing is off the table, RepresentUs volunteers can still have meaningful conversations about policy by phonebanking and textbanking. Anyone can join the Action Brigade and start making a difference.

RepresentUs opposes corrupt government practices, including gerrymandering and voter disenfranchisement, and provides avenues for everyday people to come together and speak out for what’s right. Volunteers unite for a weekly Calling Out Corruption phone bank to lawmakers, and they also circulate petitions about the most pressing issues of the day.

Although RepresentUs had to postpone its Unrig Summit until May 2021, the team has begun promoting an Unrig Roundtable webcast in its place. The first episode fostered a bipartisan discussion about how to make a vote-by-mail system safe and efficient.

“Advocating for vote-by-mail policies has consumed our work,” Ellen said. “We want to hold local officials to account while also supporting those in government who fundamentally care about the people’s right to vote but may not have the resources to expand voting by mail.”

Educating Americans on the Benefits of Ranked Choice Voting

Over the years, the RepresentUs team has won a lot of victories against corruption. The team has run more than 110 successful campaigns, including helping to get Ranked Choice Voting adopted in New York City as of 2019.

RepresentUs is pushing for voting reforms to make the 2020 elections more fair and representative.

Ranked Choice Voting allows citizens to rank political candidates in order of their preference. This can be useful when voters face a choice between three or more candidates because it allows a person to vote for the candidate that best represents his or her views without worrying about a third-party candidate pulling support away from a similar ideological candidate.

The two-party system in place can restrict a voter’s choice and cause them to choose between “the lesser of two evils” rather than throwing their support behind a cause they truly believe in. By giving voters the option to pick a second, third, or fourth choice, Ranked Choice Voting can provide a more accurate picture of the people’s will.

RepresentUs educates people on the benefits of Ranked Choice Voting and encourages local government to level the playing field for independents and bring new voices into the system.

“Research shows that Ranked Choice Voting improves civility,” Ellen said. “It also mitigates the need for recounts and runoffs, which lowers election costs. And it actually allows independent candidates to compete more viably, so we can put an end to the broken two-party system.”

The RepresentUs team works hard to level the political playing field and make sure that elections represent the American people. Ranked Choice Voting is just one of many reform campaigns promoted by the grassroots organization.

RepresentUs has also been a staunch advocate for automatic voter enrollment, greater transparency in campaign finance, and civic education on voting rights and laws.

“We really want to give Americans a vote and a choice,” Ellen said. “So they can cast their ballot for the candidate they would want to see in office. If we could implement these reforms in tandem across the country, it could change the game and unrig the system.”

RepresentUs is a Nonpartisan Advocate for Fair Representation

Whether it’s tackling campaign finance reform or fighting against voter disenfranchisement, RepresentUs focuses on what matters in politics — the people’s will — and lays the groundwork to make sure that every American voice is heard loud and clear on Election Day.

The coronavirus pandemic has sent shock waves through every aspect of life from the dating scene to the political sphere, but people are still finding ways to connect, come together, and forge a new path forward. Even as social distancing separates friends and families, RepresentUs has blogged, podcasted, petitioned, and reached out online to remind Americans of everything that unites us as a people.

“It’s going to be a very different and interesting year, but I really do see folks rising to the challenge,” Ellen said. “There is so much unknown, but everywhere I look I see people writing and talking and pushing the boundaries. People have pivoted and continued to fight the good fight, and that’s what we’re all about.”