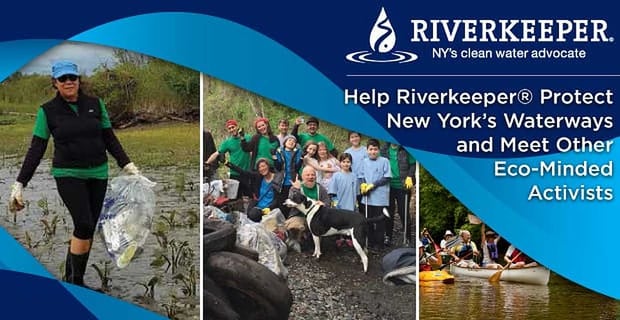 The Short Version: Touted as “New York’s clean water advocate,” Riverkeeper has been defending the Hudson River and its tributaries for more than five decades. Founded in 1966, the nonprofit organization protects the drinking water supply of 9 million Manhattan and Hudson Valley residents through active memberships, grassroots campaigns, public policy initiatives, and a variety of community activities such as the Riverkeeper Sweep. From educational workshops to large-scale projects, Riverkeeper events offer opportunities to not only protect the beautiful waterways of New York, but they also give individuals a chance to meet like-minded environmentalists and philanthropists. “Up and down the river, local communities come out and take ownership of the different events that we help host,” explained Jennifer Benson, Outreach Coordinator for Riverkeeper. “Neighbors help neighbors address the local environmental concerns for our waterways while getting to know each other in a real, organic way.”

In 1966, pollution and neglect were slowly destroying the Hudson River. Run-down factories peppered the coastline and choked the waterway with hazardous waste, poisoning the fish, threatening the drinking water supply, and ravaging what was once a freshwater haven for boating and swimming. The Hudson, once known as America’s First River, had become little more than an industrial sewer.

“It’s the human connection and the passion for the water that brought us together to fight for our river,” said Jennifer Benson, Outreach Coordinator for Riverkeeper. “We were founded by fishermen, and the river was their life blood. More than 50 years later, our small staff of 30 is still working alongside community members and relying on the capacity of volunteers and individuals to amplify the work we do.”

Originally founded as the Hudson River Fishermen’s Association, Riverkeeper continues to protect the river, seek out polluters, and team up with citizen scientists and activists to reclaim the Hudson River. Working together is still very much the foundation of the passionate advocacy group.

“There’s power in numbers,” Jennifer said. “Over the last few years, we really built up the engagement of communities up and down the river, including New York City, and we’re still finding new ways of bringing people together to talk about the mission and educate people.”

According to the organization’s website, Riverkeeper’s mission is to protect the environmental, recreational and commercial integrity of the Hudson River and its tributaries, and safeguard the drinking water of 9 million New York City and Hudson Valley residents. The team hopes to achieve this by focusing on local community issues, including ecosystem restoration, protecting the drinking water supply, and improving public access to the river.

Sweep: An Annual Day of Service to Establish Clean Waterways

One of Riverkeeper’s most successful events is Riverkeeper Sweep, an annual day of service for the Hudson River and its tributaries. Over the past six years, the daylong event has brought about 495 projects across hundreds of miles of shoreline from Brooklyn to the Adirondacks. Since the Sweep’s inception in 2011, more than 10,000 volunteers have removed 191 tons of debris, planted 2,228 trees and native grasses, and removed numerous invasive species from the coastal areas.

By volunteering at a Riverkeeper event, you can meet and bond with like-minded people.

“Thousands of people come together and lead their own local projects,” explained Dan Shapley, Water Quality Program Director for Riverkeeper. “One of my favorite stories of a connection that was made during Sweep features a wonderful couple named Arthur and Brenda.”

Volunteering together at a local Sweep brought the couple closer and gave them a common goal to work toward. They’ve since gotten married and have remained active in a local citizen water group near Wallkill River Valley.

Now in its seventh year, the next Riverkeeper Sweep is scheduled for Saturday, May 5, 2018 (rain or shine). Riverkeeper is always looking for new volunteers to help out with established projects or to create new ones, and this is a great opportunity to get involved and meet people.

“Arthur and Brenda’s story typifies the style of events that we do,” said Leah Rae, Staff Writer and Media Specialist for Riverkeeper. “We set the framework for gatherings up and down the river, but it’s all about the local communities coming out and taking ownership of the event. It’s about bringing neighbors out and finding people in their communities that are equally concerned about local environmental issues.”

Get Involved in Shore Cleanups, Restoration Plantings, and More

Aside from Riverkeeper Sweep, the organization hosts dozens of annual events where volunteers can get involved in shore cleanups, educational workshops, native restoration plantings, public hearings, rallies and so much more.

“Our full-service opportunities bring people together,” Jennifer told us. “These are opportunities for people to meet each other in the community because we work really hard to bring in new people.”

Dan told us the 2017 Riverkeeper Sweep exemplified Riverkeeper’s ability to unite individuals under a common purpose. During the event, folks worked together to remove 858 tires from the Hudson River.

“If you’ve ever been in knee-deep mud hauling a tire out of the creek, you understand the kind of intimate connection that can build,” he said. “It binds people together in their love of the water, which is really important to us as an organization. It also creates a deep meaningful connection between people and the environment.”

“A lot of people end up working together next to someone who they never ever even knew existed,” Jennifer said about the volunteer events. “Whether for trash pickup or tree planting, it’s a really great opportunity to get out and meet new people.”

Turn Water Into Beer: Presenting Tasty Beverages for a Good Cause

A hard day’s work — whether it’s working at an office or volunteering along a muddy creek — can often lead to a celebratory beverage once the job’s done. That’s part of the reason why Riverkeeper teamed up with local brewers to showcase the importance of clean, healthy drinking water for the communities surrounding the Hudson River and its tributaries.

“One thing we did to highlight this is to work with a brewery in Poughkeepsie that makes its beer with its public drinking water supply,” explained Dan. “We work with them to brew an IPA-style beer with so many hops that it could essentially survive an ocean voyage and not spoil.”

According to Riverkeeper’s website: “Brewmaster Jamie Bishop, of Mill House Brewing Company, has crafted a brand new IPA brewed on Trinity Cruise Company’s Evening Star tour boat on the Hudson River with water from the river. This Hudson River IPA pays homage to the origins of the brew, while the project serves to raise awareness about the importance of protecting our river as a source of clean drinking water.”

In keeping with the theme of pints for a good cause, Riverkeeper has recently participated in the annual Farmhouse Ale Competition. Every year, more than a dozen local home brewers compete for a chance to brew professionally with District 96 Beer Factory. Attendees vote on their favorite beer, and a percentage of all ticket sales go to Riverkeeper.

Do Your Part: Riverkeeper Offers an Array of Ways to Make an Impact

From beer competitions to coastal cleanups, Riverkeeper offers many ways for individuals living near the Hudson River Valley and New York City to make a difference and help protect the beautiful waterways of New York. You can become a member of the organization, make a donation, minimize your environmental footprint, stay informed, volunteer, attend events, and report pollution violations to make a positive impact in this important effort.

“We have a Young Advocates Council, which is a few dozen 20- and 30-somethings who are really dedicated to Riverkeeper and to raising friends and funds for us,” Dan explained. “We also have some folks in New York City aiming to put on a series of fun and educational events — from a Water Trivia Night to guided kayak tours to a hike in the watershed with one of our staff scientists.”

“It binds people together in their love of the water, which is really important to us as an organization.” — Dan Shapley, Water Quality Program Director for Riverkeeper

For those who can’t find the time or don’t have the money to directly help Riverkeeper, the organization urges individuals to reduce their environmental impact by conserving water, reducing car travel or gas usage, planting with organic gardening materials, avoiding fertilizers, properly disposing of pharmaceuticals, and finding alternatives to harsh soaps and detergents.

“Just picking up trash or planting a tree is a really tangible connection,” Dan said. “In this moment in history, because we have all these ways of being connected electronically, to have that kind of real experience is something people really value. I think it has a greater meaning in people’s lives because we live so much of our lives in a virtual space these days.”