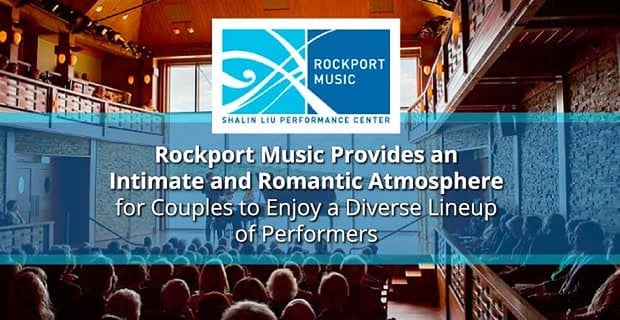 The Short Version: Located in scenic Rockport, Massachusetts, Rockport Music puts on a slate of exceptional performances and events all year long. A charming seaport village provides the perfect romantic backdrop for couples looking to enjoy a night of music spanning many genres. Each year, Rockport Music hosts a series of concerts ranging from contemporary to jazz to folk/Americana. Its quaint venue, the Shalin Liu Performance Center, has 330 seats, meaning all spectators not only have a wonderful view but are treated to a more intimate atmosphere. Because of its size, Rockport Music also attracts world-class performers looking to make a true connection with audiences. Visitors and locals looking for a special location to take a date seek out Rockport Music for its stunning ocean views, incomparable performances, and one-of-a-kind atmosphere.

Music has always played a vital role in society. It’s a medium that engages the entire range of human emotion, offers listeners a window into other cultures, and has a powerful restorative effect on the human brain and body.

The benefits music adds to people’s lives is why it can be important to find a partner with a similar appreciation — if not the same taste. Questions about music are common on a first date because the answers can tell you a lot about a potential partner.

Musical tastes often correlate with traits like political orientation, verbal ability, and athleticism, according to a study by the University of Texas at Austin, and it’s often used as an indicator of compatibility.

Couples who enjoy music frequently do so together, seeking out new and exciting ways to interact with the sounds they love. Rockport Music has been providing exciting musical experiences by the Massachusetts coast for more than three decades.

Rockport Music’s location is not only great for performances, but it also provides an atmosphere that encourages lively conversation. Chris Blagg, Rockport Music’s Marketing Manager, told us he frequently takes his wife there on dates.

“Rockport Music is our go-to date. It doesn’t matter who’s playing — we know it’s going to be a nice show,” he said. “In the summer, you’ll be watching the show and often see the sunset behind the artists, which is an amazing experience.”

A Picturesque Place Created by an Art-Centric Community

Rockport Music has grown from its humble roots as a small chamber music festival founded in 1981 into one of New England’s premier performing arts venues, and the seeds of its evolution were sown by the volunteers who created Rockport Music.

“It began as a small, volunteer-driven chamber music festival, and slowly it grew into an arts presenting organization offering more types of music,” Chris said. “After it became so popular, the board decided to build a venue that showed off the Atlantic Ocean and the location of Rockport.”

The harmonious combination of music and the stunning architecture at the Shalin Liu Performance Center are what make Rockport Music such a romantic date night setting. The entire back wall of the stage is a floor-to-ceiling window that overlooks the ocean.

The Shalin Liu Performance Center has breathtaking views of the ocean behind the stage.

Seeing the sun set behind a performance can be a breathtaking experience for concertgoers. “It is the most beautiful hall in which I’ve ever performed. It is intimate and awe-inspiring. As a performer, it brings out a different inspiration for my music and performance,” Wendy Chen, a classical pianist, said of the space.

The venue frequently sells out, and Chris told us locals are likely to see familiar faces in the crowd. “Many of us go to as many concerts as we can,”he said. “We know how blessed we are to have this available at our doorstep, so we take advantage of it as much as we can.”

Rockport Music also promotes art appreciation by offering free and inexpensive events. This ensures that all members of the community have access to a place where they can enjoy beautiful musical performances.

Each summer, Rockport Music still hosts its Rockport Chamber Music Festival — a community favorite. Violinist and violist Barry Shiffman, the new artistic director for 2018, brings his own vision to the annual event and all classical programming.

“He’s trying a lot of new and exciting things; adding a unifying theme of r:Evolution to this year’s festival, bringing in a multimedia aspect to many of the concerts, and offering classical cabarets and seemingly random pop-up concerts around town during the festival,” Chris said. “These are ways to make it a festival atmosphere rather than a collection of concerts.”

Rockport Music also puts on The Rockport Jazz Festival each summer featuring an extensive lineup that has included many influential artists — like John Pizzarelli and Danilo Perez.

For people just getting acquainted with a particular style of music, Rockport Music offers programs that help the community discover and enjoy specific music categories.

“We’re trying an after-hours classical cabaret, which can be an entry point for those who may not know much about classical music,” Chris said. He adds that, during the cabarets (which are on the third floor of the Hall), couples can enjoy cocktails while listening to the music. “When you’re on a date, this cabaret could be a perfect way to explore music, especially for those who aren’t familiar with the classical genre.”

In addition, Rockport Music is close to many fine dining options, adding to its date night appeal. Or you could pack a romantic picnic dinner to eat on the beach before or after a show.

In addition to its festivals and concert series, Rockport Music welcomes headliners to its intimate space. One of Rockport’s own, singer-songwriter Paula Cole, often performs at the venue during the summer. It’s an opportunity to experience her hits stripped-down as well as her new music. Another ‘90s Lilith Fair favorite, Shawn Colvin, brings her famous musical storytelling to Rockport Music to delight old and new fans alike.

Gordon Lightfoot, the legendary Canadian troubadour, will be in concert in June, when guests can experience one of the greatest songwriters of the modern era. Music lovers in search of fresh, edgy grassroots tunes will enjoy performances by artists like Rad Trads, Enter the Haggis, and the Delvon Lamarr Organ Trio.

Chris also mentioned a few other notable artists that have been added to the calendar.

“There’s so much I’m looking forward to. We are welcoming Raul Malo from the Mavericks, an old-school romantic crooner, and Jake Shimabukuro, a Hawaiian ukulele player, who is also a YouTube sensation,” he said. “Jazz singer Jane Monheit also puts on a beautiful show.”

Rockport Music Can Be a Music Lover’s Dream Wedding Venue

With a space as spectacular as the Shalin Liu Performance Center, it’s no wonder Rockport Music is a popular wedding destination for music lovers who are ready to say I do. Stunning ocean views and gorgeous architecture combine to create a memorable and beautiful event.

The same venue Rockport Music uses for concerts can also be used for weddings.

Have your ceremony on the concert stage overlooking the sea, and then enjoy dinner and dancing in the reception hall on the third floor. The unique venue provides plenty of striking photo opportunities. It’s an ideal location for a wedding that is personal, easy to plan, and distinctive in style.

For couples living near Massachusetts, or just planning on dropping by on vacation, a night of entertainment at Rockport Music is a can’t-miss destination. Indulge in the beauty of nature and inspiring sounds in an intimate hall with someone special. It will undoubtedly be an unforgettable evening.