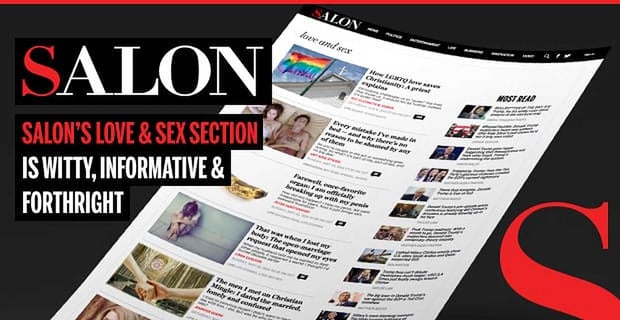 The Short Version: Established in 1995, Salon.com is a top news outlet circulating the latest in politics, entertainment, business, and dating. Their “Love & Sex” section is particularly salient with topics spanning dating myths, sex studies, and personal anecdotes from singles and couples. The website’s original content drives up traffic as well — reaching an all-time high of about 20 million monthly visitors. To provoke an intellectual conversation online, the Salon Media Group innovates storytelling mediums and explores social media, videos, and wearable technology as new ways to reach people. Daters can read through Salon’s Love & Sex section to find out what’s hot in the dating scene.

When 23-year-old Tiffanie Drayton penned an article about race relations for Salon.com, she started a conversation that would transport her from lonely to smitten in a heartbeat.

A single comment captured her attention. Standing out from hundreds of black-and-white viewpoints, one man wrote to her with eloquence and empathy, which prompted her to reply: “Please contact me via some form of social media.” She didn’t know what would come of connecting with this stranger, who lived thousands of miles away from her, but she was drawn to him anyway.

“He validated my existence,” writer Tiffanie Drayton said of a commenter on her Salon.com article.

“Our relationship started slowly,” she wrote in an article describing the love-struck affair. “We exchanged messages about our dreams, goals, passions, and pasts.” After months of talking, they at last met in person at Newark International Airport in New Jersey. He reached out and took her hand, and their online connection blossomed into a full-blown relationship.

Salon.com, the backdrop for this romance, is a website full of exceptional stories and compelling conversations. The Salon Love & Sex section encourages a dialogue between thoughtful, like-minded individuals like Tiffanie and her commenter.

“I sat with it for a moment, trying to build the courage to say what I felt. I was in love with a stranger in the clouds.” — Tiffanie Drayton, a freelance writer for Salon.com

Online comments can quickly devolve into a cesspool of vitriol, but not on this website. Salon’s comments section is policed for clarity and decency, ensuring a respectful discourse of ideas — not insults.

The Salon Media Group has driven the national conversation since 1995 and knows how to nudge it in a positive direction. As one of the first entirely digital media outlets, Salon.com innovated the space with original articles (and now videos) offering well-researched criticism, commentary, and reporting.

On the topic of dating, the stories range from the science of orgasms to confessions of an erotica writer and challenge readers to consider new perspectives on love and sex. According to the website: “Salon is a gathering for the stimulating exchange of both ideas and entertainment.”

On Salon, hundreds of dating articles tackle touchy subjects in the romantic world. Covering everything from first-date etiquette to sex toys, the Love & Sex section gives singles and couples advice based on academic research or personal experience.

Since 1995, Salon has worked to elevate the web with smart commentary on the day’s news.

In recent years, Salon focused on video to augment their content. “Salon has begun executing a strategy to produce original editorial video content focused on news, politics, and entertainment,” a press release explained.

Salon.com considers itself “platform-agnostic,” shifting mediums seamlessly from wearable tech to traditional desktops to suit the preferences of their audience. Today, you can read Salon’s content on any device your prefer or follow their Facebook page for updates in your newsfeed.

Audience engagement is the objective of every article. Every section welcomes a spirited and thoughtful discussion between adults. Anyone 13 and older can sign up and make a reply of up to 1,000 characters. Many commenters come to Salon seeking an exchange of ideas, and so the articles serve as a jumping-off point for informed debate.

When sex comes into public scrutiny, Salon is there to analyze the scandal, study, or situation. Salon’s hard-hitting journalism uncovers culturally salient truths that impact modern dating culture. The Love & Sex section highlights what research says about dating trends and what news events are impacting the space.

These articles generate a lively discussion in the comments section as people weigh in with their insights. Both informational and entertaining, Salon engages readers with their original content.

On Salon.com, authors relate their own personal experiences in a frank — and often funny — tone. The writers take nuanced perspectives on dating life, from ultra-conservative virgins to polyamorous swingers.

The candid way the writers discuss sex is refreshing and enlightening. It’s helpful to hear real people describe how sex and dating apps have impacted their love lives. Readers can empathize while getting useful insights about mistakes made in bed, catfishing, and other dating-related incidents.

According to the site: “Our articles and original videos bring a variety of voices to the discussion and make the conversation smarter.”

Spreading Their Message to an Audience of 20M Monthly Visitors

A large chunk of their audience is looking for fast-loading, mobile content. Mobile and Facebook usage is growing for the company as people change the way they find their daily news. In March 2016, the company reported mobile users accounted for 62% of all users.

In terms of demographics, the millions of visitors who come to Salon to get their news definitely fall into a certain type, according to data gathered by Quantcast.com. The audience skews slightly more male at roughly 68% and overwhelmingly more white at 84%. Most live in the U.S., though there is a strong global contingent.

A large majority of visitors are educated adults — 82% graduated college and 70% are over the age of 35. Even more impressive, 35% went on to earn a graduate degree. This is far above the U.S. national average. Salon’s more learned audience is indicative of the academic tone cultivated on the site.

There wasn’t data on what percentage of the website’s visitors are single or married, but a little over half (58%) reported having “no kids,” which suggests a substantial portion of the audience may be unattached. Regardless of their relationship status or background, daters can seek guidance and entertainment on Salon’s mobile-friendly platform.

Combining a personable attitude with scholarly research, Salon’s Love & Sex section informs as well as educates millions of readers. Daters can use Salon to get tips, share stories, and join a modern discussion about love and sex.

You may not find real-life romantic love in these articles like Tiffanie did, but you’ll always find an interesting read and insightful commentary.

“Salon is a terrific brand with a strong audience, and we’re focused on execution to realize the value of the company,” said Jordan Hoffner, CEO of Salon Media Group. “The goal is for Salon to be a significant player in the media landscape.”

As far as dating is concerned, mission accomplished.