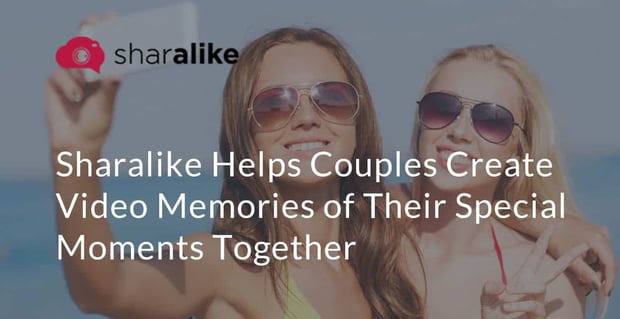 The Short Version: With mobile device cameras becoming so sophisticated, people, especially couples, document their lives in more detail than ever before. But many aren’t sure what to do with all of those photos once they’ve taken them. Sharalike is a photo editing app that solves that problem by automatically transforming life events into memorable slideshow videos. Couples can add or remove pictures, choose the music, and customize the order in which the images appear. The app also allows them to easily share their creations through email, text, or social media, so everyone involved can cherish the memories.

Couples often take a lot of pictures during their romantic outings together. They may document every beach hike, dinner outing, and sightseeing expedition. By the end of a long weekend, they could have hundreds of photos — and not really know what to do with them.

Aymeric Vigneras was quite familiar with that scenario. In 2013, he spent a wonderful weekend with friends in Cape Cod. While he was there, he took plenty of pictures and also asked his friends to share theirs.

He decided the best way to remember the trip was to turn the photos into a video. But even though Aymeric was involved in a lot of online marketing, and therefore had access to a lot of tools for video editing and design, he said he still struggled with the consumer-grade tools available.

Sharalike shows couples how to turn their photos into rich video memories.

“After two days of trying to make a montage video, I gave up. As a professional, I can use professional tools to make videos. But as a consumer, it was very difficult,” Aymeric said.

From that frustration, the Sharalike app was born. The app automatically transforms photos taken over a short time into a video. Users can choose the images they want to include, add music, and then share what they have created with family and friends.

If someone wants to turn photos from a romantic trip with their significant other into a video, Sharalike can accomplish that automatically. Then, users can add their favorite song to the video and send the finished product to their partner.

“When you share a video with someone, they can get very emotional. It creates a stronger bond between you and the person because they’re touched that someone spent the time to do that for them,” Aymeric said.

Making a video on Sharalike is a simple process that starts when users download the app to their mobile device.

When they open the app, the program sorts through the device’s camera roll to find moments that link together in some way. For instance, perhaps someone took a lot of photos at a friend’s wedding or on a camping trip.

“A moment is usually a certain date and a location,” Aymeric said.

The app isn’t likely to choose a date where someone only took one or two pictures. The idea is that Sharalike creates a story, and it can tell it with only a few images.

After it selects photos, the app automatically generates a video. That ensures that users don’t have to spend time browsing through every picture included in the slideshow.

“In creating videos, Sharalike is automatic. That’s why we receive a lot of testimonials about how simple it is to use,” said Aymeric.

The app includes features that ensure the best images are used. If users take a photo burst of 100 photos, for instance, their video won’t include dozens of slightly different versions of the same image. Instead, the app selects the best image out of a group of similar pictures.

Given a series of similar images, Sharalike technology understands how to choose the one where people are smiling, the photo isn’t blurry, and everyone’s eyes are open.

The app generates background music that users can change to convey a different tone. When they’re satisfied with the result, they can save the video and decide who to share it with.

In addition to creating videos, users can personalize them to their specifications so they look just like they want.

“Our app is also straightforward, so users don’t get lost in a lot of settings and options,” said Aymeric.

That isn’t stopping the Sharalike team from working to simplify its video editing features and make them even more straightforward.

If users don’t like the photos the app chooses, they can add or remove pictures. While Sharalike creates a video from your most recent series of images, users can search through their camera rolls to find other options. For instance, they can scroll back several months and use the app’s Smart Select feature to include all the photos taken on a particular day. They can also easily remove some of the photos they don’t want in the video.

The Sharalike app is designed with simplicity in mind.

Once the video is finished, they can add their favorite music, and the app even slows down or speeds up the video to match the song’s tempo.

Users can choose different animations and filters to give their videos a unique look. The Sharalike team continually updates those features to add the latest styles and filters users want to see.

Once their video has been perfected, the app helps users share it with others.

“I wanted to have the opportunity to share publicly or privately. I didn’t want to be forced to share everything with everyone. So you can share videos as you wish on Facebook, email, or text message,” Aymeric said.

The app has found a considerable cross-section of users in the United States, where 60% of its users are women ages 20 to 60.

Since its start as a simple video editing app back in 2013, Sharalike has developed into one of the top apps in the industry. Not only has the team expanded to 10 employees, but the app has also helped turn more than 42 million photos into videos. The app is even the top-rated photo app in 20 countries.

The company sees spikes in usage during specific times of the year when people create videos for their partners, friends, or family.

“We see an increase in usage a week or two after the holidays. That is especially true after Valentine’s Day and Mother’s Day,” Aymeric said.

Users report finding the videos incredibly moving. Many people often make videos for their partners as a gift to remember a significant event or to commemorate a special day.

The Sharalike team also receives testimonials from users who have made these videos after their weddings and other special events. Another moment that Sharalike users often memorialize is when a loved one passes away. Users feel connected with their photos, so they share personal stories about the impact the app had on their lives.

“They use Sharalike to look at pictures and share them with their loved ones. I’m always shocked by how many emails we receive about weddings, birthdays, or when someone passes away,” Aymeric said.

Aymeric said he is glad that he created a user-friendly video editor to help people find more uses for the photos on their mobile devices.

“You feel good. The videos help people remember the moments in life that are important,” he said.