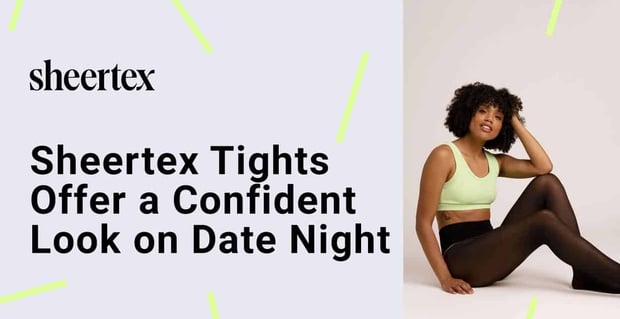 The Short Version: Runs and rips in stockings or tights are fine if you’re at a punk rock concert, but not if you’re on a fancy date with someone special. Sheertex tights are stretchable, durable stockings that use trademarked knit technology to help singles feel great day and night. This brand has innovated in the industry and given wearers a reliable alternative to disposable fashion since 2017.

A well-planned outfit is a key to confidence for a big date, and there’s nothing like an unexpected wardrobe malfunction to make it less comfortable. Cheap tights and knits that run or rip easily can be a disaster when out for an evening of fun with a special someone.

Stockings are often a big part of an overall look, as they keep you warm while also providing a natural sheen and extension to the leg. If you’re wearing heels, you’ll need a good knit — but not a pair that might rip or sag. If you have to adjust your tights, you’re bound to feel uncomfortable.

Sheertex makes tights, stockings, and socks with a high-tech knit material so they stay strong and stretchy even after dozens of wears. The brand uses proprietary technology to ensure its products remain stretchable and durable longer than the disposable tights typically sold in stores today. And Sheertex has legions of fans who love to wear its tights.

“I absolutely love my Sheertex stockings,” said Anaireisa, who gave the brand’s classic semi-opaque tights five stars in an online review. “They are unbelievable compared to the many stockings that I’ve accidentally destroyed just by trying to pull them up.”

The stockings are water-resistant and quick-drying, thanks to the innovative Sheertex Knit technology. They feel similar to traditional tights, but they’re stronger and less likely to rip and tear — which also keeps them out of the landfill. They’re made ethically in Montreal, Canada, and the tights are ideal for all climates, so singles anywhere can wear them on a date.

Knit Fabric Made From Heavy-Duty Yet Thin Fiber

Entrepreneur Katherine Homuth initially had the idea for long-lasting pantyhose. She was concerned about fast fashion and its toll on landfills worldwide. She also saw a gap in the market, as billions of pairs of pantyhose are thrown out every year, according to the Sheertex team. Those cheap knits were becoming a problem for both wearers and the environment.

“Over 2 billion pairs of pantyhose are thrown away each year,” the team said. “Tights shouldn’t be trash, so we’re replacing them with a strong and long-lasting knit that can be worn again and again.”

Katherine uses the same material designed for rock climbing and other demanding activities. She engineered a method to make the material thin enough to look great on legs. She raised $14 million working with other angel investors and launched the company in 2017.

The antimicrobial, ballistic-grade fibers were an instant hit. Katherine was named to Forbes Magazine’s 30 Under 30 List, and rave reviews began flowing in. The product also made TIME’s Best Inventions list in 2018.

“Believe the Hype,” wrote Sandra L., who gave her Classic Sheer tights a five-star online review. “I have to admit I was skeptical about the durability of these pantyhose, but I was glad to be proven wrong. It’s a must-have investment and staple for your wardrobe.”

One of the most popular items is its Essential Sheer Tights, which many consider the ultimate basic legging product. Its Essential Sheer option is made with a fully automated process instead of being hand-sewn. Products also come in sustainable packages and have a 30-day guarantee.

Most products come with a 90-day guarantee, which shows how confident the company is in its line.

Customers can browse the Sheertex online store to determine the best look for them. First, they select denier, or the measure of fabric fiber thickness. As the denier count increases, the fabric becomes more opaque and durable.

Sheertex uses one of the world’s strongest polymers for its knits, and it’s the same material used in sailing equipment. The trick was creating a system that turned those strong fibers — usually around 1,000 denier — into tights, which typically range from zero to 100 denier.

The team worked directly with manufacturers to weave a patent-pending knit of ultra-soft, strong, and versatile fabrics that customers can wear repeatedly without worrying about rips.

“I was used to wearing a pair of tights once — twice if I was lucky — then needing to replace it because of runs and pulls,” she wrote. “Not only have I saved money, I feel more confident in my sheers, knowing they can withstand anything.”

Sheertex manufactures the knits in its private factory. That process was made necessary because traditional machinery couldn’t handle the super-strong knits. Its operation is located in Canada’s largest hosiery factory in Montreal, known throughout the world for high-quality textile production.

While Sheertex products cost more than traditional styles, customers say it’s a worthwhile investment because they hold up well over time.

Customers can browse classic styles and new arrivals online, and select the color or pattern they desire. Sheertex sells tights in black, nudes, polka dots, and fun patterns, among other categories. It produces some designs in limited numbers, so it’s a good idea to grab them before they’re gone.

Along with traditional full-foot pantyhose, options include shaping, footless, and high-rise. The company also offers no-sweat shorties, which work great under skirts and dresses to keep legs feeling fresh even on long walks.

“I am a plus-sized woman — putting on tights has never been easy,” wrote Samantha G. in a testimonial. “These tights slipped right on. When I used my fingers to inch up fabric, no puncture marks or tears from rings or nails.”

The company also offers knee-high and thigh-high stockings, socks, and accessories made using the same high-tech material. The Slouch Lounge socks and the Rhombus Crew socks come in modern colors and maintain their shape. They even sell pink Breast Cancer Awareness-themed socks.

Sizes for the tights and stockings range from small to 3X. That inclusive size range is also echoed in the company’s Magazine, which is a blog filled with style ideas and stories about customers and the team behind the looks.

“We use the extra material from our production process to make new products like masks, headbands, scrunchies, and underwear,” the Sheertex team said. “This collection is still growing — so stay tuned for more upcycled products to come.”