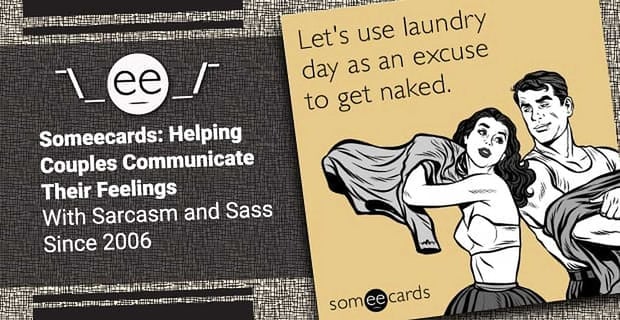 Someecards: Helping Couples Communicate Their Feelings With Sarcasm and Sass Since 2006

The Short Version: Someecards, the free, colorful online ecard company, has been offering a funny way for people to communicate since 2006. Founders Duncan Mitchell and Brook Lundy have assembled a team of stand-up comics, advertising copy pros, and other snappy writers to create fresh cards that are as relatable as they are shareable. If you could use a little help expressing something to that special someone, Someecards has you covered. Now, the company has expanded to bring smiles to its audience with articles and a line of cheeky merchandise, including wine — which pairs well with dry wit.

It’s nearing 4 p.m. when your boyfriend asks if you’ve seen his shoes, and you unleash a few choice words on him. Five minutes later, after having a snack, you realize your reaction may have been a little out of line. What do you say without making it a bigger deal than you already have? Easy: Share a Someecard with him that depicts a little girl eating a sandwich and reads, “I’m sorry for the unkind words I spoke out of hunger.”

Someecards can be a great way to share a humorous thought, or apology, with someone special.

Score a big promotion at work, and your girlfriend isn’t making as big a deal about it as you think she should? Send her a snarky Someecard featuring a couple, forehead to forehead looking lovingly at one another over glasses of champagne that conveys the message: “The best thing about you and me is me.”

Wondering how to drop the hint that you’re ready to make your relationship a little more permanent? Try the not-so-subtle hint of a showing a woman distraught, draped over the side of an armchair that reads, “Facebook constantly reminds me that people uglier than me are getting engaged.”

There are thousands of shareable and relatable Someecards — which were memes before memes even existed — that simply make people laugh. At times when relationship issues may seem like they’re getting out of hand, sometimes a bit of levity can make all the difference. Someecards are free and usually convey exactly what you want to say — with a little more biting wit.

“People often use other objects to communicate, especially online — including greeting cards, emojis, GIFs, memes, and what we make, which is kind of in the middle,” said Duncan Mitchell, who co-founded Someecards along with Brook Lundy. “That’s the business we’re in — trying to help people communicate online in a format that makes it easy and fun to share.”

Creating a Witty Form of Communication That Hadn’t Existed Before

Duncan and Brook were working together in online advertising back in the mid-2000s when they found themselves searching the internet for funny things to send to each other. But, too often, they came up empty, which led them to discover a niche.

“We were looking around the web and didn’t see much that we wanted to share because this was pre-Facebook and Twitter. There were big companies, like Blue Mountain and a few others, but they were all really saccharine, very straightforward,” he said. “Card humor hadn’t caught up with the internet yet. We thought we could make something we would want to send back and forth to our friends and our co-workers. That was the original intent. If it became a business, great. But we had jobs, and it wasn’t the primary goal.”

Someecards quickly became popular, and the company is often credited with creating the meme.

Of course, it didn’t take long for the format to become popular, in part, because of its humor and also its accessibility. So the Someecards team started producing traditional ecards for events such as anniversaries and birthdays. But they didn’t stop there. In the same vein as their sarcastic and sassy humor of the ecards themselves, new categories popped up. Now, people can send Someecard varieties such as a “courtesy hello” or a “cry for help.”

“The ‘courtesy hello’ could be a good card to send to a date because it’s reaching out in a low-pressure way,” Duncan said. “A good one reads: ‘I’d love to see you next time either of us has any money, free time, energy, or interest in leaving our homes.’ That’s a different way of saying, ‘Hey, let’s hang out sometime.'”

The Faces Behind Someecards: Who Writes Those Hilarious Memes?

Who even thinks these crazy things up, anyway? Duncan explained the company brought together a big group of mostly New York-based stand-up comedians — people working as comics or in improv — who use Someecards as their day job while performing in the evenings.

Co-Founder Duncan Mitchell said, “The ‘courtesy hello’ could be a good card to send to a date.”

In total, about 50 people may rotate in and out of the team on somewhat of a freelance basis. They’re not just comics, however. They’re also sitcom writers, late-night talk show writers, and some who work in advertising — really, it’s anyone who can write short, funny, and thoughtful copy.

Of course, it’s not easy. The single-sentence format, coupled with a classic-style image of a couple or a random person, provides endless possibilities. But there’s still quite an art to the writing. Duncan said there are just a few simple rules: There can only be one sentence, no questions, and it’s not a joke.

That’s the thing that makes them so unique. Even though Someecards will crack you up, it’s not because of a joke. It’s because you really relate to them.

“It’s not a joke. It’s supposed to be a surprising treat,” Duncan said.

A Big Change From the Traditional Greeting Card Industry

It’s been a long time since I’ve visited a greeting card store, even though I love to stay in contact with my friends and family throughout the year. Luckily, the team at Someecards has thought of nearly every situation or occasion that would warrant a correspondence.

It’s mostly women who share Someecards, and they have plenty of options to send to a boyfriend, girlfriend, friend, husband, wife, or anyone in their lives who needs a laugh. Someecards also has a plethora of options specific to the LGBTQ community.

Someecards takes LGBTQ issues seriously but also understands the community could use a laugh.

“We’re sensitive to that stuff, and we try not to write cards in a way that’s too edgy or going to upset people,” Duncan said. “We also try to focus on holidays that others might not have known about.”

Someecards also offers a line of merchandise, including calendars, which provide fun reminders throughout the year, and has even branched out into selling another product that goes well with sarcasm — wine.

In addition to the side-splitting laughter that friends, singles, and couples can share by sending Someecards, the fact that the cards are free has propelled the company’s popularity. Duncan said that’s never going to change, but now the site includes articles written by the team, which are also free to share.

“The cards are free, and we never want to charge for them,” he said. “But, now, we have these great comedy writers cover trending news, celebrity, and everything going around the internet.”

Duncan and Brook are proud of the impact their company has made, and all of the smiles their products elicit. Still, they take it in stride.

“Our cards have made it all over the internet and around the world, and we’re really proud of that. But, on the other hand, we don’t take it too seriously because some people would just say it’s a meme or a greeting card,” he said. “As long as people are enjoying it and sharing it and giving us feedback that they still like it, we feel great about that.”