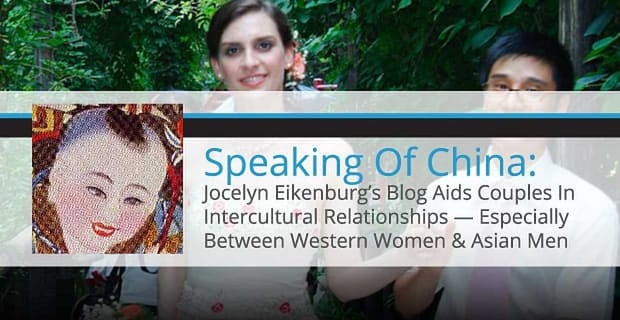 The Short Version: Nearly a decade ago, blogger Jocelyn Eikenburg noticed the lack of online stories about Western women in relationships with Asian men. But she had a unique perspective on the situation after falling in love with an Asian man while teaching in China. So Jocelyn started Speaking of China, a blog detailing her life journey, and she quickly realized she wasn’t alone. Over the years, the blog has transformed into an advice column and community of readers who discuss a broad spectrum of interracial and intercultural relationship issues. It has become a resource for people who struggle against cultural norms to keep their love strong.

I entered my first interracial relationship about 10 years ago with a handsome African-American man. He and I had worked at the same after-school program years earlier, so I was happy to see him again when we reconnected one night at a waterfront bar.

He was so handsome with big muscles and an even bigger smile — and we made each other laugh. I had an extra ticket to a reggae show that weekend, so I invited him, and we had a blast dancing together. A few days later, when he picked me up for another date, I introduced him to my roommate. She made a big deal of him and even asked him to turn around in front of her so she could admire him.

I shook my head as I watched him be a good sport, laugh, and twirl. A week or so later, when he invited me to a party at his friend’s house, his friends made me do the same thing. I couldn’t say no after my roommate made the same request, so I spun around, sheepishly.

Jocelyn Eikenburg started her blog, Speaking of China, to help others in intercultural relationships.

We both realized how out of each other’s element we were, and trying to meld the different cultures and expectations became a big part of our time together. No matter what the combination, interracial and intercultural relationships can be challenging to navigate.

Jocelyn Eikenburg is intimately familiar with the subject. As a Caucasian woman married to a Chinese man, Jocelyn realized that there weren’t many online resources that described what it’s like to date — or marry someone — across those two particular cultures. Her blog, Speaking of China, is a personal look at her life, written so that readers can relate, no matter what kind of relationship they’re in.

“I write from the heart, and I believe that’s the kind of passion and warmth you’ll find in the posts on Speaking of China,” Jocelyn said. “Some have lauded my work for showing empathy and for giving readers a place to feel heard and understood.”

When Jocelyn moved to China to teach English at a college, she assumed she wouldn’t find love there. In fact, she envisioned herself taking a vow of chastity during her year-long assignment.

But when she moved to Zhengzhou, the capital of China’s Henan Province, she developed a huge crush on a man she met there. Jocelyn soon found herself in a relationship with him. That’s when she started to see the societal prejudices that came with romances between Western women and Asian men. Not only had she not known many Asians while growing up in the suburbs in America, but those she met in college were nothing more than friends.

When she met her future husband in Hangzhou, she encountered many new experiences, from turning heads when holding hands together in public to the cultural challenges involved in meeting and winning over his parents. After they married in 2004, she knew she had to share her story.

“Years ago, when I first wrote about how rare it is to see Western women and Chinese men together in China, I received an outpouring of comments from around the world because the post resonated with so many people who were in interracial relationships,” Jocelyn said. “It made me realize the importance of speaking out about my own experiences in interracial relationships — since there were many other people out there who felt just as isolated as I once did.”

At the heart of Jocelyn’s blog is a simple girl-meets-guy love story, which is universally relatable. Interracial and intercultural couples may seem complicated to the outside observer, but on the inside, it’s simply love between two people. That love is evident in her favorite posts — like the photo essay celebrating the couple’s 10 years of marriage.

The site contains many more resources, including clips of relevant and interesting articles, movie recommendations, and handy tips about communicating in China. Jocelyn also provides examples of why her marriage is so different than what she thought it would be when she was growing up.

Jocelyn celebrated 10 years of marriage to John with a special photo essay on Speaking of China.

It was her husband who helped her love her curves. And Jocelyn wants her readers to know that Asian men can get the job done in the bedroom. In fact, many of her blogs encourage Western women to give Asian guys a second glance.

Her blog has garnered attention, including from The BBC.

“She says she now receives scores of emails a month from Chinese people curious about meeting and dating foreigners, or partners new to, or experiencing difficulties, in cross-cultural relationships,” the article said, referring to Speaking of China.

Along with guest columns that speak to different issues associated with interracial relationships, Speaking of China contains an extensive list of Jocelyn’s favorite books and blogs, inspirational men and women, and dating resources on her site. It’s why many women with Asian lovers gravitate to the site.

“Over the years, the blog has become a community where people in similar interracial/intercultural relationships can connect,” Jocelyn said. “It was especially helpful for women like me, who were either with Asian men abroad or in their own countries. Many of us have bonded over the years, and we’ve since created communities online and offline to support each other.”

Jocelyn has reached readers all over the world with Speaking of China while also writing for The Wall Street Journal, the Huffington Post, and China Daily, and she continues to provide others with resources they need to navigate relationships — with anyone, from anywhere.