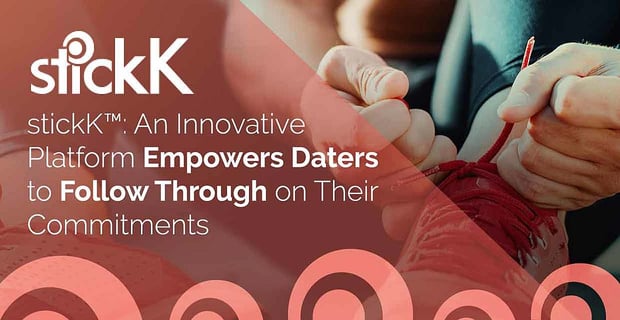 stickK™: An Innovative Platform Empowers Daters to Follow Through on Their Commitments

The Short Version: Singles and couples have to take action if they want to improve their dates and relationships, but they can lose focus without a regimented system in place. Fortunately, the motivational tools on stickK can help keep them on track. This community-driven platform holds users accountable for sticking to the goals and commitments they set. With the help of stickK, singles and couples can stop making excuses and start meeting dating and relationship milestones.

Many singles struggle to stay motivated while meeting one person after another in the dating scene. It’s hard to believe you’re making progress when every bad date brings you back to the proverbial drawing board. However, I’ve found that setting goals for myself has helped me through the ups and downs.

When I started my first online dating account, I told myself I’d go on one date a month. That was no sweat. After six months, I realized my slow pace wasn’t getting me anywhere very quickly, so I upped my goal to one date a week. This challenged me to say yes to guys I would’ve normally turned down — and that’s how I ended up meeting my last boyfriend.

stickK offers its users a personalized goal-setting regimen proven to get results.

By setting goals and sticking to them, you can significantly increase the quality of your life and feel more satisfied on a day-to-day basis. Of course, as everyone on New Year’s Day knows, making a goal is easy — following through with it, not so much.

It can be difficult for the average person to follow through with the things they want to achieve, and that’s where stickK comes in. This engaging platform offers clever incentives to keep users moving forward and making progress on their goals.

Whether you want to go on more dates, exercise more often, or practice relationship skills on a daily basis, you can set guidelines for yourself on stickK, and the platform will give you a reason to follow through with them.

“We provide a place where people make commitment contracts,” said Jerry Brown, stickK’s Product Manager. “It doesn’t cost anything to set goals you want to do. The only cost comes when you don’t hit the goal you set for yourself.”

The stickK platform takes goal-setting to a new level by providing an accountability system based on sound psychological principles — namely, that people will do anything to avoid losing something they have. If users don’t stick to their stated goals on stickK, they’ll lose money.

Each user can define their own goals and customize their experience online. You create a schedule for yourself — as in, “I will ask out at least five people a week” or “I will exercise twice a day” — and make a commitment to bettering your life.

Setting custom Stakes on stickK is optional, but highly encouraged.

Next, users can choose to appoint a Referee to hold them accountable as they work toward their goals. The Referee can be a friend, a family member, a spouse, a teacher, or anyone who supports you in your goals. That person will then verify that you did indeed accomplish your goals each week. The stickK team takes the Referee’s word over the user’s word, so there’s no chance of cheating your way through the system.

Should you fail to meet your goals, stickK has built-in consequences represented by the Stakes, or money that users put up on their commitments. The user can decide how much money they want to essentially bet on themselves living up to their commitments. This feature is optional, but highly useful as a motivational tool because the user also names a place to send that dollar amount if a goal isn’t met.

“You set a price on procrastination and not reaching your goals,” said Pablo Spínola Fresán, who works on stickK’s Business Development team. “Each user decides how much money they want to put in and where that money goes.”

For instance, if you set a goal to go on a date a week, and you miss a week, you can choose to send the money you would’ve used on the date to another couple, a friend, or a charitable group.

A majority of users choose an anti-charity — that is, an organization that doesn’t align with their values — to receive their money should they fall short of their commitments. This motivates users to stay on track, or they’ll support something they hate. The prospect of giving money to a cause they vehemently disagree with can fire users up and prompt them to do anything they can to meet their goals.

“That is definitely the biggest motivator for stickK users,” Pablo said. “An anti-charity is an organization that goes against your core beliefs, so people hate to see their money go there.”

The dating goals I set last year were merely promises to myself. If I’d missed a week here or there, well, that was just between me and my calendar. No one was really keeping me in line, so it was up to me to police myself. That’s a tall order for singles who already struggle with online dating burnout.

It helps to have an outside influence — whether it’s a dating coach, a friend, or a community — keeping you on track, and that’s what stickK provides. The platform supports 10 niche communities where users can find people who are on similar paths and making similar goals. “It’s an environment for goal-setters,” Pablo said. “It’s a great way to add an emotional aspect to the journey of making and reaching a goal.”

Since its launch in 2007, stickK has fostered a community focused on setting and achieving goals.

The Family & Relationships community has over 6,000 members and seen more than 31,000 goals completed. This community supports singles and couples who want to improve the most important relationships in their lives. The people in this group often post encouraging messages to inspire one another. It’s a welcoming place to trade tips, share stories, and discover that you’re not alone.

In addition to the communities, stickK allows organizations or leaders to set up campaigns for a small group looking to reach the same goal. Maybe a psychologist wants to motivate clients to engage in active listening when not in sessions, or maybe a fitness instructor has some regimens he or she wants to share. The Campaigns feature allows groups of people to work toward personal goals in a collaborative environment.

DatingAdvice has created two dating-specific campaigns to help singles and couples lead more love-oriented lives and support each other along the way. You can join by using this custom code on stickK: DatingAdviceCom.

“A lot of people on our platform have been trying to reach their goal for a while,” Jerry said, “but they were missing the motivation to get there because there was nothing at stake and no community behind them. We provide the tools to help them finally get there.”

Members Have Put Over $38M on the Line to Motivate Themselves

The stickK platform has designed a science-based system that gets results. The team has found that people who set stakes for themselves on the platform are five times as likely to reach their goals in the allotted time. Altogether, the platform has seen more than 425,000 commitments created, and a growing number of those have been fulfilled.

The team has heard many stories about users losing weight, quitting smoking, and becoming more active, healthy, and satisfied individuals. You can go on stickK’s YouTube page to hear user testimonials.

Pablo shared the story of one man who said he used stickK’s regimen to become closer to his son and overcome personal issues. The man said he no longer needed his account because he had accomplished everything he set out to do.

The possibilities on stickK are endless because you set your own goals and you decide where you want to go with it and how much you’re willing to invest in the journey. Its user-driven tools can adapt to any goal and help anyone work toward the life they want to lead.

In total, stickK users have risked over $38 million on the platform, setting high stakes for themselves and making a commitment to work hard every day until they reach their goals.

“We want our users to succeed,” Jerry said, “It’s powerful to see so many amazing people use our tools to accomplish so many different goals.”

Create a Dating Regimen & stickK With It

The modern dating scene offers a world of opportunity to meet attractive and intelligent people, but the burden is on the user to swipe, message, and pursue dates offline and online. Some have difficulty staying motivated in that environment, and they need someone — or something — to give them a little added incentive.

On stickK, you can give yourself a reason to move forward and send that text or make that date because your hard-earned cash is on the line. By setting high stakes for yourself, you can hold yourself accountable in the dating scene and push yourself to take a more active role in your own love life.

I know from experience that setting hard and fast goals can be a great way to ensure that you invest the time and energy it takes to make a genuine connection. Joining stickK can empower you to make that investment and bet on yourself to come out on top.

“The people on stickK commit to becoming better versions of themselves,” said Jerry. “They stop procrastinating on their goals, and we hold them accountable on our platform.”