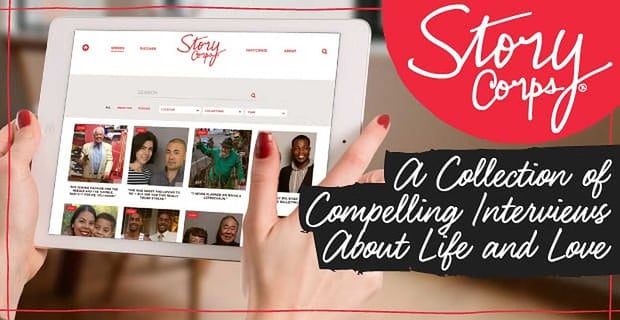 StoryCorps®: A Collection of Compelling Interviews About Life and Love

The Short Version: For more than 14 years, StoryCorps has been collecting and preserving stories that touch the core of what it means to be human in the modern world, many relaying tales of romance and the pursuit of love. These compelling, unscripted dialogues are broadcast with the aim of building connections between people and communities and to create an archive that bridges generations. For singles and couples alike, StoryCorps’ diverse and expansive collection of love stories inspires listeners, provides unique conversation starters, and offers advice on how to find and keep love in your life.

Society’s obsession with love in all its forms and functions is plain to see in this age of rom-coms and wildly sensational romance novels like “Fifty Shades of Grey.” With romance dominating the sphere of fantasy in movies and books, finding true love may seem impossible. But the story of Tabinda and Tariq Sheikh might change that perception.

Tabinda had newly emigrated from the Dominican Republic when she met Tariq at the hotel in New Jersey where they both worked. Tariq, also new to the United States by way of Pakistan, was instantly smitten.

When Tabinda first said hello to Tariq, she thought he was rude when he didn’t respond. But, in truth, Tariq confessed he was nervous because she was “the girl who was in my dreams.”

He later asked her out for coffee, and she took no less than two days to reply. Their love was slowly built on clumsily written love notes and everyday moments. One night, after Tariq had worked 72 hours straight, he and Tabinda went to a nearby park, and he put his head on her legs and slept under the moon and stars. When he finally woke up in the morning to see her still there, he knew he was in love.

For the past 14 years, StoryCorps, a national award-winning project, has been capturing stories, like Tariq and Tabinda’s, to help us reconnect to our humanity, communities, and hearts. These real-life love stories are inspirational and give singles and couples the hope that true love is attainable. StoryCorps’ unscripted narratives are relayed as natural conversations between people but are ultimately works of art that tell us something about what it means to be human in today’s world.

A Mission to Preserve Stories and Build a Compassionate World

StoryCorps strives “to preserve and share humanity’s stories to create connections between people and create a more compassionate world.” The national nonprofit project serves as a curator of stories that bridge generational divides.

StoryCorps does this to add value and understanding to how we live our lives by reminding us of our connections to one another. The national project celebrates the uniqueness and importance of every person’s story and reveals how we should listen more. The site captures the passion people have for ideas, each other, and life experiences.

From romance to immigration, StoryCorps’ mission is to share and preserve humanity’s stories.

In 2003, StoryCorps began collecting stories in a booth in New York City’s Grand Central Station. The format was so popular that by 2005, StoryCorps debuted on NPR’s “Morning Edition” and launched two mobile booths in Washington DC’s Library of Congress.

Since then, StoryCorps has opened more booths in major cities, including Atlanta, Chicago, and San Francisco. To date, the organization has published five books, launched a podcast, received numerous awards, and holds the distinction of being the largest collection of African-American narratives in the world.

Many say romance is an endangered species in modern society. The tales on StoryCorps, however, are helping to change this perception, as they relay compelling stories to remind us all just how committed to love and relationships we can be.

If you’re still skeptical, Danny and Annie’s story can clue you in.

Danny proposed to Annie on their first date, saying, “I say if we’re going anywhere, we’re going down the aisle because I’m too tired, too sick, and too sore to do any other damn thing.”

Surprisingly, Annie turned around and said, “Of course, I’ll marry you.”

He called her the next morning, April 22, as early as he could to confirm she would, indeed, marry him. She said yes again, and for the life of their marriage, he has called her every April 22 to ask if she would do it again. She has never said no.

In the StoryCorps recording, Danny tells how he would leave Annie love notes every day of their time together. One reads like a romantic weather report: “To my princess, the weather out today is extremely rainy. I’ll call you at 11:20 in the morning… And I love you. I love you. I love you.” Danny died of cancer years later, but even in their most painful times, they had each other and their love.

After Danny passed away, Annie received 1,300 letters of consolation, proving their story touched many lives. To this day, Annie finds comfort in the impact their relationship had on StoryCorps listeners.

It’s narratives like these that epitomize what StoryCorps is trying to get across — that we’re all connected through our humanity and life stories.

Susan and Phillip McClinton’s story, though a bit different from Danny and Annie’s, pulls at the same heartstrings and shows how a simple conversation on a wild topic can spark a relationship.

Susan walked into a bar looking to win a cash prize. Phillip, the bar’s bouncer, immediately knew this wasn’t her scene and told her he’d keep an eye on her to make sure she stayed safe.

The two got to talking and hit it off. Soon after, he invited her rattlesnake hunting.

“I thought you were absolutely out of your mind,” Susan said. “But I had so much fun. I thought, ‘Hey, this is something I might want to do on a regular basis.’”

It also reminded Susan how much she loved science. The crazy idea of starting a relationship with conversations about rattlesnake hunting worked and eventually lead Susan and Phillip to get married and earn their high school and college degrees.

Susan may have inadvertently employed one of the top secrets to getting conversations started when she and Phillip talked about rattlesnakes — discuss what interests your date. What resulted was he not only was able to share his interests with Susan, but they had an activity with tons of built-in conversation.

She felt comfortable talking about how much she enjoyed science when she was younger, which lead to her revealing her secret dream to get her high school diploma. This one little conversation and a silly date lead to a strong, 45-year long relationship that changed their lives.

Become a StoryCorps Member and Be a Part of History

StoryCorps is entirely independently funded by institutions, corporations, and individuals who believe in its mission. While StoryCorps is supported by numerous donors, the project continually seeks new donors.

Members of StoryCorps make it possible for interviewers to collect the memories and stories of people from all backgrounds. They also make it possible to bring stories into classrooms and preserve the voices of the underrepresented. Donations at any level are always welcome, and StoryCorps offers other ways to give back, including gifts of stock, matching gifts, and giving in honor or memory of a loved one.

It’s thanks to the generosity of donors that StoryCorps is able to preserve the enduring love stories of Tabinda and Tariq, Danny and Annie, and Susan and Philip. Listeners from around the country have been inspired by these tales of love notes, sleeping under the stars, and rattlesnake hunts (sorry, rattlesnakes). Better than rom-coms, these stories represent real life.

Sean Garrity is a Contributing Editor for DatingAdvice.com and has an extensive background in researching, writing, and editing on a wide range of topics for industry and consumer publications. Sean’s goal is to inform modern daters of the latest trends, technologies, and solutions that might help them meet their match. When he’s not behind a keyboard, you can probably find Sean outdoors camping, fishing, or skateboarding.