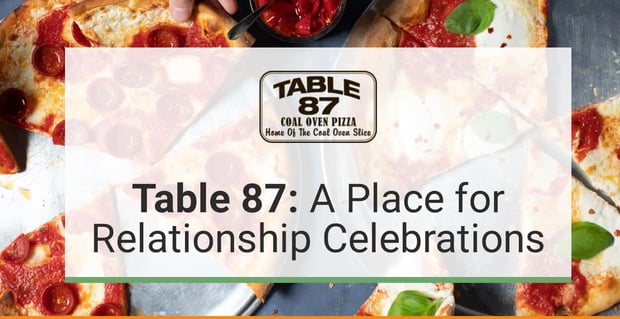 The Short Version: Table 87 is a Brooklyn pizzeria with a unique proposition. Its coal-fired slices are made to order with fresh ingredients. The restaurant also has a robust in-house party and catering business that has hosted couples celebrating weddings, anniversaries, and other relationship milestones. Couples seeking tasty date nights can travel to one of Table 87’s three locations or buy the restaurant’s frozen pizzas to bake at home.

Table 87, a Brooklyn-based pizza restaurant with three locations, is emerging from the COVID-19 pandemic in full swing. When we connected with Director of Operations Robert Cucco, he was fielding reservation requests from singles, couples in serious relationships, and families. As restrictions lift, these people are ready to celebrate.

Table 87 specializes in special occasions like wedding rehearsals, birthday parties, and anniversaires. Some couples even have the restaurant cater private events.

“If you’re having a party at your house or at a hall, we can do it. We have done gatherings of 200 or 300 people and gatherings of 10 people. We can accommodate full-menu food catering, including pasta, salad, fish, and meats, along with appetizers like baked clams. We’ve done all of that before and been successful,” Robert told us.

Table 87 isn’t just for special occasions. Diners flock to the eatery for its signature coal-fired pizza. It is famous as the “Home of the Coal Oven Slice.”

Another distinction between Table 87 and other New York pizzerias is its emphasis on cooking slices, rather than pies. This lets diners order the type of pizza they want, and even lets couples come into the restaurant for a couple of slices, rather than a whole pie. This is a smart idea if couples have plans after their dinner dates and don’t want to carry around leftovers.

Everyone is Welcome to Enjoy a Slice

The charm of Table 87 is in its casual and inclusive atmosphere. Pizza lovers of all types can come together here. It’s not uncommon to enter the restaurant and be seated between a couple on a first date and a family with a toddler in a high chair. Conversations can flow and relationships can blossom in this friendly space.

“We are a local neighborhood place. People feel like they are at home. That’s the vibe we go for — no matter how you walk on this earth, you’re there to break bread, and our bread is pizza,” Robert told us.

Over the last 10 years, Table 87 has integrated into the three communities it calls home: Brooklyn Heights, Gowanus, and Industry City. When the first location opened in 2012, Robert said many of the locals were skeptical — until they discovered how the eatery treated its staff and customers.

Each location has a slightly different client base. The Brooklyn Heights eatery has the largest dining room as well as an extensive wine and beer list. The Gowanus location is a stop on the daily Pizza Tour of NYC, so it sees a lot of tourists. The Industry City location caters to hundreds of busy diners at its walk-up counter.

The restaurant even respects non-human guests. The team stocks doggy treats and a water bowl in front of every location.

“We welcome everybody. No matter if you have four people celebrating grandpa’s 80th birthday, come in and make a reservation if you like, set the tone right. Our wait staff will be willing to accommodate whatever request they have,” Robert said.

This community support has helped Table 87 thrive in a city known for its pizza. Its local popularity also ensured that the restaurant survived the pandemic.

“Our customers are so loyal to us. We fit like a glove in all the communities we’re in. We’re a staple in a neighborhood where people have been living for many years,” Robert told us.

Plan a Pizza Party at the Main Location or at Home

Couples can celebrate relationship milestones at Table 87 without breaking their monthly budget. The menu has a variety of food and drink options. Some diners start the meal with a salad, like the Roasted Beet Salad with raisins, goat cheese, mixed greens, and raspberry dressing. Appetizers include the Italian favorites of fried calamari and fried zucchini sticks.

If diners aren’t in the mood for pizza, they can opt for a calzone, lasagna or another cheesy dish. The Sausage and Pepper Roll comes stuffed with red peppers and three kinds of cheese. Lighter options include a panini or sandwich. The Prosciutto di Parma packs mozzarella, parmesan, balsamic vinegar, baby greens, and olive oil between two slices of bread.

Couples seeking catering can order all or some of these offerings for their parties or gatherings. Depending on the number of items available, Table 87 offers packages ranging from $38 to $65 per person, with a 15-person minimum. The restaurant’s private dinner menu includes choices of appetizers, salads, sandwiches, pasta, and pizza.

“We have a very diverse menu, but at the end of the day, it revolves around our pizzas. When someone says, what’s your most popular menu item, we say our pizzas,” Robert said.

Table 87 can provide a setting to renew relationships and make lasting memories.

One diner wrote a Yelp review praising Table 87 over other local pizzerias. She said she and her husband enjoy ordering a pizza and taking the leftovers home for future meals. “The square-style pizza is among the best pizzas I’ve ever had in my life,” she said. “Super fresh and arrives hot and crispy every time. Love that it isn’t super greasy — don’t get me wrong, I appreciate a greasy NYC slice now and then, but this always hits the spot without making my stomach feel like a pit of oil after.”

Another person called the pizzeria a guilty pleasure. The review said, “The freshest mozzarella and tomato sauce someone can ask for on a pizza. The bread and crust is thin but cooked perfectly every time. Also, every time I ask for extra basil, they seriously deliver. They ACTUALLY give me extra basil unlike other places at no cost too. I got it delivered during a NYC snowstorm, which gets wild so I expected the pizza to arrive cold, but it was still warm and yummers.”

Couples who don’t live in New York can still shake up date night with a Table 87 pie. The restaurant gained national acclaim when its owners appeared on “Shark Tank” in search of investors. After some negotiations, shark Lori Greiner invested $250,000 for a 19% share.

Table 87’s frozen pies can be shipped from coast to coast, so it has enormous growth potential. Customers can find these frozen pizzas at Whole Foods or have them delivered through Goldbelly.

The New York Times featured Table 87 in a recent article, praising it as one of the best frozen pizza offerings in the city. The ability to heat just one slice instead of a whole pie is particularly appealing to singles.

“After about 10 minutes in the oven, a Table 87 frozen pizza slice is not quite a fresh (or fresh-ish) dollar slice. It’s something unto itself that, in my consideration, is a formidable rival to a street slice,” according to the article. “This is a slice full of verve — a plate is necessary to catch any gloppy mozzarella or no-frills tomato sauce.”

Table 87 has attracted devoted diners since opening its doors in Brooklyn nearly 10 years ago. Now, the Atlantic Avenue location can cater to more guests. During the pandemic, the restaurant took over the location next door, which meant adding another oven and more tables to the franchise. As a result, Table 87 has doubled its capacity and made room for more date nights and relationship celebrations.

“When people move away, they always come back to Brooklyn to visit, and they are always willing to come back to Table 87,” said Robert.