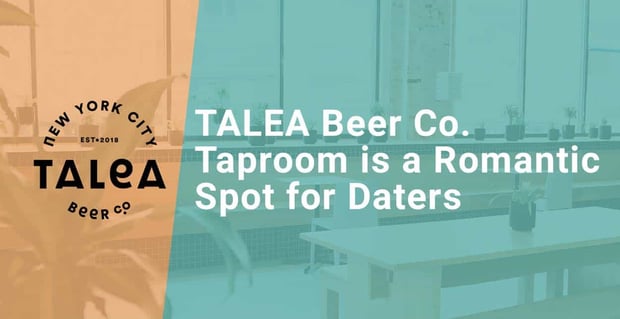 The Short Version: Some craft breweries prioritize obscure ingredients, complicated recipes, or hard-to-drink beers. That’s why many couples who prefer smooth, fruit-forward brews choose TALEA Beer Co. instead. The Brooklyn-based brewery creates unique flavors, and many of its beers taste like candy or other sweet drinks. The woman-owned business aims to ensure its success by making non-traditional craft beer drinkers its core focus.

Many couples head out to craft breweries for dates to support small local businesses and enjoy small-batch beers they can’t find anywhere else.

But not every craft brewery is created equal. Corey Levitan of the Saturday Evening Post wonders why so many craft brews don’t taste good.

Levitan’s main contention is that most craft breweries aren’t interested in making smooth, great-tasting beer. He suggests that some craft beers aren’t nearly as delicious as their widely distributed counterparts. Corporate breweries know how to develop a brand and an experience that is better than the beers they produce.

TALEA Beer Co. is a craft brewery that focuses on making beers with unique flavor profiles that taste delicious.

Couples on dates can visit the brewery’s taproom in Brooklyn, New York, and treat themselves to a one-of-a-kind beer experience. That’s because the woman-owned brewery focuses on producing great-tasting beers that are easy to drink.

Tara Hankinson and LeAnn Darland founded the brewery in 2018 to develop beers made from high-quality ingredients, including guava, mango, and raspberry.

Tara and LeAnn started brewing their beers at home, seeking to make small-batch, flavorful products. They became so committed to their beers that they left their corporate tech jobs to start their own business.

“Many beers come in intimidating and confusing packaging. Most breweries are dark and industrial, and most craft beer branding was, and still is, targeted towards the typical beer bros. They knew there was an opportunity to speak to a broader audience, and together they launched TALEA,” according to a company press release.

The team at TALEA Beer Co. seeks to brew offerings that taste like candies or drinks, including Italian ices or hot chocolate.

For example, its Pomberry Splash is a sour ale that is spritzy and brewed with tangy pomegranate and sweet blueberry, according to the website.

Not every beer is fruit-forward, though. Another unique beer is the Spicy Hot Chocolate. The Mexican hot chocolate-inspired specialty is brewed with cacao, peppers, cinnamon, vanilla, coffee, and milk sugar.

In addition to making easy-to-drink beers, the co-founders also curate a bright and modern brewery space. During the day, TALEA Beer Co. is a café that serves pastries, coffee, and kombucha before it transforms into a taproom in the evening. If one person on a date doesn’t like beer, he or she can opt for a hard seltzer or glass of wine.

Many couples planning dates at TALEA Beer Co. opt for beer flights to sample a variety of brews.

One of its most popular, the Sour Flight, comes with four beers. The first is the Cranberry Orange Splash Sour Ale, a beer brewed with oranges and cranberries and designed to taste like Sweet Tarts. The next two beers in the flight are the Paradise Punch Sour Ale, which tastes like crushed pineapple and mango candy, and the Raspberry Crush Gose, modeled after Raspberry Italian Ice and brewed with raspberry and pink Himalayan sea salt.

The fourth beer is the Plumberry Tart Deco, a sour IPA made with plum compote and passionfruit curd, as well as blackberry and lactose.

Couples on dates also flock to TALEA Beer Co. for its seasonal offerings. Its fall beers include the Festie Oktoberfest-Inspired Lager, a malty beer with notes of raisin, plum, and spices, while the Basically Pumpkin is “As basic as it gets! Tastes like pumpkin pie spice,” according to the website. The beer is served with a cinnamon-sugar rim.

Those who want to have dinner along with their beers can visit the taproom on a night when it hosts pop-up food trucks. Past food trucks have included The Za Report, Seemore Meats & Veggies, Marco Ice Cream, Hudson Table, and Makina Cafe.

TALEA is now serving King David’s Tacos every single morning until they sell out. Plus, every Thursday night, San Antonio Pizza will be serving up pizza pies to hungry customers.

The taproom also has regular events. On Mondays from 4 p.m. to 9 p.m., TALEA Beer Co. hosts Industry Night for people in the beer and spirits fields. Stroller Tuesdays invites parents of young children to the taproom from 12 p.m. to 4 p.m. Saturday mornings are reserved for taproom yoga.

TALEA Beer Co. has found a devoted clientele of locals who appreciate it as an alternative to the typical taproom.

Yelper Rohin S. wrote in an online testimonial: “Saw this place was around the corner after an early dinner and glad we decided to stop by. The place is huge, I really don’t see it filling up on weekdays and on weekends can still fit your larger groups. The interior is super modern, very clean, and sleek with a great color palette. There is a ton of outdoor space, and dogs are allowed inside/out.”

It’s not unusual for a couple to have differing opinions when it comes to craft beer: one person may love it and the other may not be a big fan. The beer-loving member of the couple can opt for the Sun Up, a beer designed to taste like a pineapple push pop or a mango smoothie, while their partner can order a glass of wine.

Other patrons may not prioritize beer. They may instead want to try a Beer Cocktail, which TALEA Beer Co. makes in connection with The New York Distilling Company and Greenhook Ginsmiths. Its Gin Crush, for example, is made with gin, Indigo Crush beer, and lemon. TALEA Beer Co. bartenders can also whip up non-alcoholic cocktails.

Even if couples miss food truck pop-ups, they can still order bites to go with their beverages. Popular options include Nutella and pretzels, spicy nuts, olives, and charcuterie plates.

TALEA Beer Co. is still establishing its place in the Brooklyn craft brewery scene. Tara and LeAnn conceived of the vision for TALEA Beer Co. in 2018, but it took them several years to make their dream a reality. The pair began setting up the brewery and taproom space in August 2020 and only started selling beer to the public in February 2021. The taproom space opened in March 2021 — still during the pandemic.

They are committed to creating a taproom that distinguishes itself from most in the industry. Rather than catering to men, the woman-owned business ensures everyone feels welcome in the comfortable, attractive space. Parents can even bring their kids to special events.

Even couples who have written off craft beer as too hard to drink should give TALEA Beer Co. a try and see just how delicious small-batch brews can be.