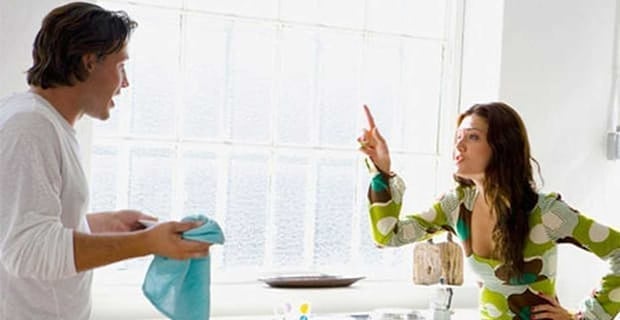 I get a lot of emails from my readers, unfortunately more than I can actually answer.

In all of those emails, there is a pattern. It seems many women make the same mistakes over and over, regardless of the stage of their relationships.

In order to help you correct these mistakes and stand out from all the other women, I have identified the nine major mistakes most of you make.

If you can at least understand these mistakes and try to correct them, your relationship will change for the better.

1. You act jealous when he looks or talks to other women.

As a man, I can confidently say it is in our nature to look. If you act jealous and flip out when we do, it shows us you are insecure.

Being insecure is a very big turn-off for us guys. If you find you are constantly jealous when he is around other women, you need to re-evaluate some issues in this relationship.

First, you need to build up your self-esteem. No man will want to cheat on a woman who is confident and secure about her position in a relationship.

Second, you need to evaluate the trust issues found in this relationship. Do you trust him or not?

Jealousy is an unnecessary emotion and an unnecessary strain people put on their minds. At the end of the day, if a guy wants to cheat, he will cheat regardless of the fact that you are jealous or not.

Acting jealous will only destroy a relationship, regardless of what the other person is doing.

With that in mind, what is the point of wasting precious energy on something like jealousy when you could be doing more productive things in that time?

You need to believe in yourself and you need to be sure the person you are with has absolutely no reason to cheat on you. If he does cheat, then he is the only one losing out.

If any guy cheats on you, you have just found out your relationship was doomed to fail anyway.

The first thing on your mind should be, “Thank goodness this happened now!”

2. You aren’t giving him space.

If a man is in a bad mood or does not feel like talking, it is best to leave him alone. Men are not women, and because of that, they often do not like to talk about their issues in the same way women do.

They would much rather hold it in and sort it out internally. Trying to get him to open up when he just wants to deal with his issues could backfire. This may cause serious fights to break out.

3. You are letting yourself go.

It is a shame to see the incredible amount of women who think that once they are in a relationship, it is OK to let go and stop shaving their legs or fixing their hair.

If anything, these women should feel more motivated to make an effort to look sexy and attractive for their man in order to keep that sexual energy buzzing. If you were ever in a relationship and felt like your sex life died, this is probably the reason.

4. You have no life outside of the relationship.

Do your best to avoid becoming one of those women who focuses her entire life on the relationship.

Do not be one of those women who forgets her friends and remembers about them only when there are problems in the relationship.

This not only suffocates the man, but it also makes you look needy, which is another major turn-off for any man.

“Once you know what he wants,

keep doing it as often as you can.”

5. You are being passive aggressive.

This is probably the main skill women have, but it also makes men crazy. If he asks you what is wrong and you say nothing but still mope around waiting for him to press you further, you will just cause anger and resentment to build up.

He will do this for a while. He will know you are actually upset, but if you constantly do this, it will reach a point to where he will just stop caring. That is the point where the fights start to happen.

All of this can be avoided if you are straightforward with him whenever you have an issue.

Nobody is perfect, and that includes the guy you are dating. Constantly telling him what he is not doing wrong is never a good way to let a man know there is something he could be doing differently.

If you actually want to see a change, tell him “I just love it when you (fill in the blank).”

7. You have grouchy girlfriend syndrome.

This is probably the biggest turn-off in my relationships. I am a positive person and just hate it when the person next to me is being grouchy, bitter or whiny.

Men understand that you have bad days, but every day should not be a bad day. Nobody wants to hang around a negative person.

The only thing worse than being grouchy 24/7 is blaming the guy for your behavior. If he makes a silly mistake, but you are already feeling grouchy when he does what he does, you simply justify being grouchy because of what he did.

Believe me, this is worse than acting negative all the time. I have had male friends who constantly complained about doing something wrong and their girlfriends were upset for one week.

By the time they were able to lift their moods up, something new will come up and they will be upset again. In the end, they all broke up with these girls.

I can assure you if you are doing this, he will eventually break up with you.

8. You are trying to change him.

Many women go into a relationship seeing a guy’s flaws but knowing they will be able to change him. That mentality is just wrong and is the reason why those relationships eventually fail.

When you start a relationship, you need to take that person for exactly who he is, not who you want him to be.

With regards to minor things, like picking the wrong shoes, you can be gentle and encouraging. There is no need to criticize him or make him feel stupid. Say it in a way that will make him feel good and inspire him to change on his own.

Saying something like, “You look really sexy in that outfit, but I think you would look even sexier with those other shoes,” will make him value your opinion, not hate it.

9. You don’t love him in the way that he feels love.

Every single person feels love differently. Many women feel loved when their partner is supportive or when he brings a bouquet of flowers. These gestures might mean nothing to a man.

Guys have their own way of feeling loved that is often very different from the way you feel love.

If you just give him the kind of love you hope to receive, he will almost never feel loved. You need to pay attention to how he responds to various things in order to work out what makes him feel truly loved.

Once you know what it is, keep doing it as often as you can.

Personally, I like to be kissed and hugged a lot. Other guys would like a hot meal at the end of the day, which I love, too. Others might prefer a cup of tea. They might want a massage, sex or even just sticking with him through the hard times.

Whatever it is, you need to find it and replicate it as often as you can.

This is the sort of stuff I discuss on my blog and in the free ebook I give out. If you want to increase your love life’s success, visit http://TheSingleWomanGuide.com – a place where the conventional “dating mindset” is thrown out the window in favor of more direct and fruitful methods of meeting, attracting and keeping a quality man in your life.

How to Turn the Tables When He Cancels a Date

8 Do’s and Don’ts for Dating Your Boss

11 Bad Relationship Habits (Plus How to Break Them)

5 Reasons Dating the Same Type Will Ruin Your Love Life