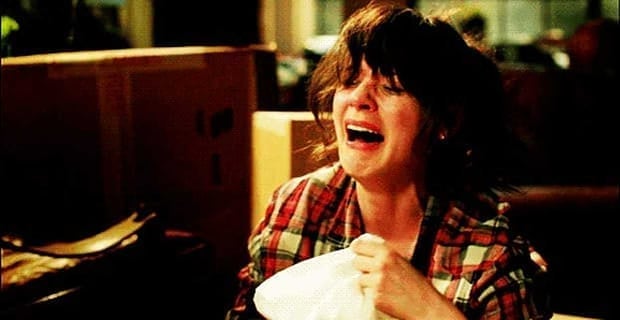 The 9 Worst Songs to Listen to After a Breakup

Sometimes you’re driving around, going about your day-to-day business, when all of a sudden a simple song starts playing on the radio that makes you cry because you’re having a breakup flashback.

By the time you get to the chorus, you’re cry-singing. Cry-singing is a displeasing musical technique, where sobbing and muttered obscenities replace the actual lyrics.

Songs seem more relatable when you’re hurt, angry or glad to see the back of someone’s head after a breakup.

Whatever the reason, these songs will stir emotion in you and might even validate the phrase “hell hath no fury like a woman scorned.”

I listened to this song when I broke up with my first boyfriend in 1994, and it still has magical powers that make me cry about that breakup.

Just listen to these lyrics: “And you’ll finally see the truth. That a hero lies in you.” Pass me a tissue.

This song makes you miss people for reasons you didn’t even associate with them until you listened to this song.

It’s a great song, but you don’t need anyone putting soppy ideas in your head that shouldn’t be there.

Even if you broke up with someone years ago, some music is so powerful that it can take you back to a moment in time when you once lived the lyrics in a song. Why doesn’t this song come with warnings?

Sex can make you stay with someone longer than you should if it’s amazing.

Just don’t reach for the phone to set up a booty call if you’re reminiscing! That is, unless you’re desperate. Then you can go nuts.

If you’re going through yet another breakup and feel like you’re meeting the wrong people like it’s your part-time job, I don’t recommend you listen to this song.

You really will feel like you’ve “been everywhere, man, looking for someone.”

When you break up, move on. Don’t get stuck on repeat about all of the reasons why you broke up.

Everyone has heard it a million times, and they’re glad they’ve got “one less problem.”

I think you should reach for the tissues now because, “We could have had it allllllll.” With a voice like Adele’s, missing someone just got biblical.

Angry about a breakup? This song could inspire your inner wack-job to surface. Driving your car into a bridge, pushing someone’s stuff down the stairs…can you spell bail?

This is another double-edged song. It’s good because I like to think I am pretty damn amazing just the way I am. It’s bad if you’re not wearing waterproof mascara.

You don’t even have to breakup with someone for this song to make you emotional. How is this possible?

There are definitely a smorgasbord of emotions I associate with each breakup and the men I’ve been out with.

I am a big cry-singing fan. It’s the polar opposite to my other favorite hobby, laugh-talking. Sometimes, until I can get back to my laugh-talking self, I need to let the cry-singing rip to get to that point again.

Whatever song you’re listening to and relating to a breakup, do it in moderation. Too many ballads could make you depressed, and too many feisty songs might lead to crazy breakup ideas.

Moderation is definitely the key. Use music wisely and join me for some laugh-talking sometime.

Sharyn Atkinson has been single for 12 years — and no, she hasn’t been living under a rock and refusing to meet eligible bachelors in her hometown of Melbourne, Australia. She’s just not interested in most of them, and the ones she is interested in still have their good and bad moments.